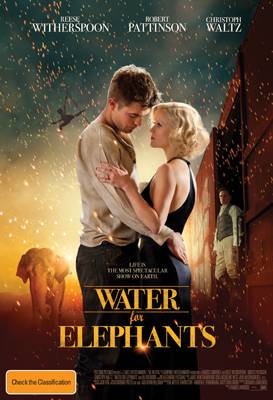 Synopsis: During the Great Depression, Jacob, a penniless 23-year-old veterinary school student, parlays his expertise with animals into a job with a second-rate traveling circus. He falls in love with Marlena, one of the show's star performers, but their romance is complicated by Marlena's husband, the charismatic but unbalanced circus boss.

Verdict: From the bestselling novel by Sara Gruen, comes Water for Elephants the movie. Starring Twilight's heart-throb Robert Pattinson and the stunning Reece Witherspoon, this story is one you will never forget. The story follows Jacob Jankowski's journey working with a travelling circus. He makes a split decision and jumps on a train that will change his life. This decision brings with it a whole lot of new experiences including love, friendships and working with beautiful animals.

Jacob works as the circus vet and gets to train a gorgeous elephant named Rosie, who he adores, but it's the owner's wife, Marlena that steals his heart.

This is so much more than just a circus story. There are fantastic characters with a lot of personality, some good and some not. The story is very true to the book and the people cast for the roles were chosen perfectly, they are just as I'd imagined them to be.

There are some amazing scenes of Marlena (Reece Witherspoon) doing tricks with Rosie the elephant and also tricks with horses. The costumes are beautiful and you really got a feel of what the circus life was like back in the 1930's. It shows how hard the workers and animals are pushed to perfection and their difficult living conditions.

The movie was very impressive and has everything a good movie needs. It has the love story, an interesting story line, great characters and so many human emotions, from jealousy and anger to happiness and amazement. The acting was very well done and on the whole the movie was a huge success. It's original and not like anything you've ever seen before. It was very enjoyable to watch and I would definitely recommend it.
Rating: ****