Leading Australian dermatologist says the skin condition vitiligo is often dismissed but can be psychologically devastating (more than skin deep) and a source of bullying for many thousands of young Australians. Inspirational young woman and former contestant on The Voice Zoe Tsagalis is happy to share her personal battle with the devastating condition.

Vitiligo (vit-ill-EYE-go) is a disorder in which white patches of skin appear on different parts of the body. To mark World Vitiligo Day (25 June), leading Australian Dermatologist and Director of The Vitiligo Centre Australia (VCA), Dr Phillip Artemi, is calling for greater awareness and understanding of the condition to help stem the growing trend of bullying and low self-esteem amongst sufferers.

Dr Phillip Artemi, Dermatologist and Head of Vitiligo Surgery at the Skin Hospital Westmead, recently founded the VCA, the first of its kind in Australia, to provide specialised care for vitiligo sufferers and conduct research to improve treatment of the condition which affects more than 300,000 Australians, 80% of whom are under the age of 30. 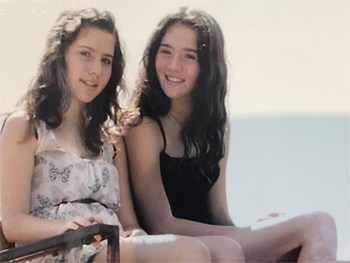 Question: What is vitiligo?

Zoe Tsagalis: Vitiligo is an autoimmune disease affecting the skin, whereby the areas affected are without pigment. This leaves suffers with areas of contrasting white patches and no protection from the sun's UV rays.

There is significant variation in the way vitiligo presents, with some people displaying large patches and others smaller, grouped areas affected.


Question: How does vitiligo currently affect you?

Zoe Tsagalis: I've had a love/hate relationship with vitiligo throughout my life. As I have gotten older however, I feel as though I have more self-awareness when talking to others and have an elevated appreciation for people with differences, than I believe I would otherwise.

I use the condition as a talking point for my uniqueness and try to see the positivity in it. It can be really difficult to accept yourself, especially in your formative years, but by embracing my differences, I was able to fully accept myself for who I am in multiple aspects of my life.


Question: Can you talk us about your vitiligo diagnoses?

Zoe Tsagalis: The first signs of my vitiligo appeared when I was 5 years old, first presenting as small patches on the front of my knees. At first, my parents didn't consider it much to worry about, assuming I had tripped over but after a couple of months, and the patches began to spread to other areas, such as my hands and feet. After visiting the GP I was referred to a dermatologist who diagnosed vitiligo. 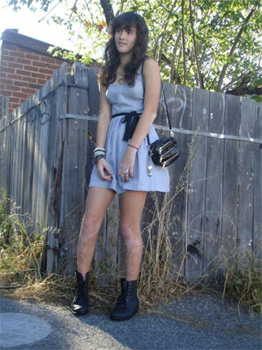 Question: How do you treat your vitiligo?

Zoe Tsagalis: Treatment at first was very minimal while the specialist waited to see where the patches would appear but as my vitiligo continued to spread, I began attempting just about everything under the sun (mind the pun). I have used hormone creams, light treatment and even resorted to trying acupuncture and other Chinese medicines.

Due to the very unpredictable and personalised nature of vitiligo, it is never known how successful a treatment will be for any one person so I was keen to try anything that might help.

Treatment was very demanding, having light treatments 3-4 times a week, or covering almost my whole body in creams every day to combat the spreading and even hopefully reverse the vitiligo.

I was unlucky in that these treatments were not producing lasting results and I decided to stop any and all methods of therapy. For me, this was the best decision and ultimately encouraged me to embrace the condition rather than focus all my energy on getting rid of it.


Question: How did vitiligo affect you, growing up?

Zoe Tsagalis: I was quite an outgoing, lively kid growing up and was interested in a wide range of activities including sports and music. There were times in primary school that I was questioned about my vitiligo. Often being asked if it was contagious, as well as being called a cow or giraffe due to the patches. As I got older, people often mistook my condition as a -bad fake tan'. I grew a thick skin early and had to learn that most people have never seen or didn't understand vitiligo.

It was also very important that I be careful in the sun, having no protection where I was affected. This meant that I had to be vigilant with sunscreen and covering up when outside so I often wore rashes when swimming and long pants in summer time. This definitely came with a level of responsibility and caution from a young age and was something that I got embarrassed about in my teens. This is when I really turned to music to express those feelings.


Question: What did you learn about yourself during your time on The Voice?

Zoe Tsagalis: The Voice was one of the most incredible experience I've ever had. Being able to express myself through music and really open up to such a huge audience was both nerve wreaking and exhilarating. Throughout The Voice journey I learnt how important it is to be open and honest with others and yourself about who you are and how you feel. Music has always been my coping mechanism throughout my life and I had been apprehensive about being vulnerable. This experience allowed me to step out of my comfort zone and gain the confidence to share my voice, as well as my story. 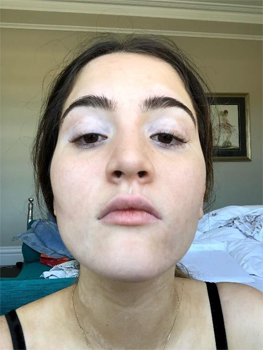 Question: What message do you hope to spread this World Vitiligo Day?

Zoe Tsagalis: To all of those suffering with vitiligo, you're not alone in your condition and there are lots resources out there both medically and emotionally that are there to help you thrive! It's so powerful to unite, even in our differences and flourish together!


Question: What advice do you have for other females with vitiligo?

Zoe Tsagalis: You need to embrace who you are and your differences – these are what make you unique. Lean on the people that support you and accept you unconditionally, these are the people that will help you on your journey and will be there for you no matter what. Self-esteem is really important and there will always be people who will try to pull you down. Draw on your support base and take conscious steps to identify the positiveness of your condition. If you can do this, you'll feel more comfortable and confident in yourself than ever before.

Zoe Tsagalis: I've recently finished a degree in commerce and have accepted a place at the University of Melbourne to complete a masters there next year. In the interim I'm looking forward to focusing time on my musical ambitions and play some gigs here in Perth!