Industry Training For School Leavers – A Fast Track To Success? 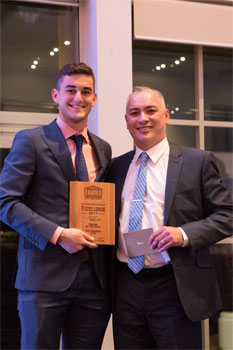 "And once you find one, don't hesitate: jump on it."

For school leavers facing anxiety about their future, a traineeship may be just what they need.

Just ask Ben Cousins, whose transition from school into further studies – with a full-time income –could not have been smoother.

Two weeks after finishing Year 12 in 2014, Ben was employed by ITI Australia (Innovative Timber Ideas), doing a traineeship and a Cert IV in Leadership & Management with them, and earning decent money.

And it didn't cost him a cent. Nada. No study debt hanging over his head.

To Ben, choosing industry training over uni was a no-brainer from the start.

-When I was completing Year 12, there was a heavy push for us to get a university education, but I decided it wasn't something that I wanted to pursue,' he says.

-I just wanted to get out in the workforce…but at the same time I knew I needed some kind of tertiary qualification. When I was offered this traineeship I knew that it was a perfect fit for me,' he says.

Ben's host trainer, Leon Rayner of ITI Australia, says the company has seen 18 TABMA/ITI cadets across the country complete the training over the past three years. He says hands-on apprenticeships/traineeships are a great way to learn.

-In just two years, trainee cadets gain industry-specific education, a recognised qualification, and knowledge that would otherwise take an employee about 10 years to acquire through normal day-to-day business,' Leon says.

-Ben now has a number of pathways open for his career – each almost guaranteed to be a success and with a better than average income;  and we offer everything from a broad overview of the timber industry, from forestry through to the end user.'

Colin Fitzpatrick, CEO of the Timber and Building Materials Association (TABMA) and TABMA Apprentices and Trainees, says skilled workers are in short supply in Australia, and have a high earning capacity.

-There are thousands of skilled and rewarding jobs out there that don't require a degree, with well-paying, upwardly mobile careers.'

And there are great opportunities for travel, he says: -Training for a trade equips you for jobs all over the world.'

For Ben, the traineeship has obviously been the right choice for him: -I have learnt so much from it; hopefully it's just the beginning of a great career with this company.'

To school leavers still suffocating under the painful decision of what to do in 2018, he has the following advice:

-If you're not sure that university is the path you want to take, then keep your mind open to other opportunities, because there are definitely plenty out there.

-And once you find one, don't hesitate: jump on it.'