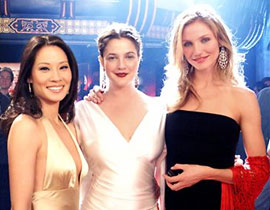 Charlie's Angels ARE full throttle from go to woe. Dressed to kill, with a pose to match, the angels, Natalie Cook (Cameron Diaz), Dylan Sanders (Drew Barrymore) and Alex Munday (Lucy Liu) are all fired up to kick some butt. Going undercover to retrieve two missing silver bands that contain valuable encrypted information that reveals the new identities of every person in the Federal Witness Protection Program, things don't go according to plan. Dylan's (Barrymore) past catches up with her, but big mistake... don't take her trusty lighter.... there's no love lost on the villain this time. When witnesses start turning up dead, only the Angels, using their expertise as masters of disguise, espionage and martial arts, can stop the perpetrator, a mysterious 'fallen' Angel (Demi Moore - who is on fire). Aided by their trusty colleague, Jimmy Bosley (Bernie Mac), the Angels' adventure begins at a remote Mongolian outpost and ends only after Dylan (Barrymore) is forced to face a dark secret from her past - a secret that puts the lives of her two best friends in danger.

Watch out for Mr Munday (John Cleese) who is a most forgiving father, and Natalie (Diaz) with her moves and grooves, but the creepy thin man twist is best of all. This funloving girl power movie was just the pickmeup I needed at the end of a long day.

The Angels are ready to strike without warning and kick some serious butt as they go undercover to retrieve two missing silver bands. These are no ordinary wedding rings. They contain valuable encrypted information that reveals the new identities of every person in the federal Witness Protection Program.

When witnesses start to turn up dead, only the Angels can stop the perpetrator, using their expertise as masters of disguise, espionage and martial arts. Good morning, Angels. Get ready to raise hell.


My Verdict:
From the opening sequence to the grand finale, the sequel to Charlie's Angels is definitely Full Throttle. There is action aplenty with not much time to catch your breath before the next action episode. This time around, the Angels have been set the task of finding two rings and returning the rings to the Federal Protection Agency. Cameron is Natalie, Lucy is Alex and Drew returns again as Dylan. They are always in the right place at the right time to catch those would-be criminals using their physical beauty as an added asset to their physical strength. This time around their biggest foe is Madison Lee (Demi Moore looking decidedly too skinny). Madison is an ex-Angel who has decided that a life of crime isn't so bad after all. It is the Angels job to realise she is the ring-leader (pun intended) and to stop her.

It is constantly amazing how the Angels always manage to overcome their attackers without any weaponry at their disposal. Sometimes their escapades are just a little too much to accept, especially the opening sequence but then again this is meant to be pure escapism. And besides, the Angels are such good looking gals, who cares? But still, there was so much of this movie that was overdone that eventually it became very blasé and all a bit ho-hum, not again.

Along the way there are a few cameo appearances - Jaclyn Smith appears as Kelly Garret from the original TV series of the same name, the Olsen twins appear for some reason (?) and John Forsythe still lends his voice as Charlie as he did in the TV series, amongst others. John Cleese accepted the role as Alex's dumb dad for whatever reason, which was a pity as he can do better than this. Luke Wilson and Matt LeBlanc play the love interests of Alex and Natalie respectively in minor roles but they did appear to be sheer token roles.

Overall, Charlie's Angels is fun albeit absurd in parts. It is definitely a no-brainer and not meant to be deep and meaningful. Don't sit and count the impossibilities because you'll run out of numbers, but instead sit back and enjoy the ride, now matter how bumpy it gets.