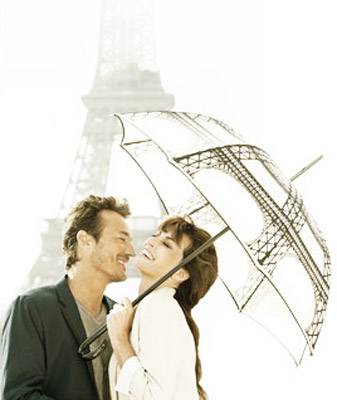 The Expedia list highlights locations around the globe that have been placed on travellers' -must do' list through the dramatic cinematography and evocative images from masterpiece movies. With destinations as diverse as Japan and Scotland, and closer to home New Zealand, visiting these locations is sure to make travellers feel they're on the set of a blockbuster.

Louise Hurbert-Burns, Marketing Manager for Expedia Australia and New Zealand, says: 'Movies have a powerful ability to evoke a sense of the exotic of the locations in which they are filmed, and they are widely acknowledged to inspire travel to those destinations. For travellers, the fascination of picturing scenes in the film and then comparing it to the real life version can lead to a strange sense of déja-vu, particularly for those who have seen the movie several times."

'On www.Expedia.com.au you can plan an entire holiday to any of these exciting destinations, including flights, accommodation, car hire and activities, within the convenience of one easy site," she said.

www.Expedia.com.au's Top Ten Destinations Made Popular by the Movies:

Slumdog Millionaire tells the story of a young uneducated man from the Dharavi slums of Mumbai. The life and events of Mumbai is pictured in many films but Slumdog Millionaire offers a harmony of Mumbai's slum and privileged life. There are shots of iconic Taj Mahal and Chhatrapati Shivaji Terminus as well as the city's infamous but rarely explored slums, capturing their energy and urgency. There is an entertaining variety of Indian music as well as scenes highlighting the array of colour in Indian culture, from the clothing to the foods and architecture, making the film aesthetically pleasing. The film has been nominated for ten Academy Awards in 2009 including the award for Best Picture.

Filmed in several locations in Kyoto, Japan's most culturally rich and scenically striking city, Memoirs of a Geisha displays locations such as the Kiyomizu temple and the Fushimi Inari shrine. The gardens in particular appear especially beautiful against the colours and softness of the surrounding landscapes. Whilst the scenes depicting an early twentieth-century geisha district in Kyoto, were filmed on set in California, they do give a striking insight into the history of this fascinating aspect of Japanese culture. For anyone who thought that Japan's cities had become merely a collection of dense modern architecture and polluted air, this movie offers a refreshing glimpse at a more culturally evocative and aesthetically beautiful destination. The film stars Zhang Ziyi, Ken Watanabe and won Academy Awards for Best Achievement in Art Direction, Best Achievement in Cinematography and Best Achievement in Costume Design.

Based on the true story of Cuban revolutionary Che Guevara, this film is a journey across South America where the characters travel over 14,000 kilometres, from Argentina through Chile, Peru, and Colombia to Venezuela. There is also a glimpse into areas such as the city of Buenos Aires, Lago Frías (Argentina), Temuco Atacama desert (Chile), and Cuzco and the Incan ruins of Machu Picchu (Peru). The rich display of colour and land diversity is eye catching and evokes feelings of adventure and exploration for prospective travellers to the South American continent. It won Academy Awards for Best Achievement in Music Written for Motion Pictures.

Lord of the Rings: The Return of the King, staring Elijah Wood, shows the world what New Zealand has to offer. Locations were taken from all over the country and remain largely untouched. Mount Ruapehu, the scene for the Mount Doom exteriors, is one of the world's most active volcanoes and the largest active volcano in New Zealand. The Paths of the Dead scenes were shot at the Pinnacles, one of New Zealand's best examples of badlands erosion, located at the head of a valley in the Aorangi Ranges. When visiting the various locations of the movie, visitors could be forgiven for feeling they have stepped into a land of adventure and the supernatural. Lord of the Rings: The Return of the King won all eleven Academy Awards it was nominated for including Best Picture.

Scenes from Braveheart were taken from many areas across the dramatic Scottish highlands, particularly in and around Glen Coe, Glen Nevis and the Mamore mountains. Glen Coe is arguably Scotland's most famous and most scenic Highland glen, a place where travellers are inspired by the grandeur of its surrounding mountains and fascinated by its turbulent history. The early scenes were filmed on the River Nevis and the fields on the banks of the river, such as the wedding celebrations where the lord invoked his noble right of "First Night". The movie also features the famous Edinburgh castle, a -must see' destination in Scotland, but it appears somewhat less grand in the movie than it does in real life. As Scotland's most famous castle, today it dominates the city skyline and is a popular tourist attraction. With Mel Gibson as Director and in the lead role, the film won five Academy Awards at the 68th Academy Awards, including the award for Best Picture and Best Director.

The ancient province of Transylvania in present-day Romania in Eastern Europe is the setting of Bram Stoker's Dracula and features the famous castle of Bran, supposed to have been the home of Prince Vlad Tepes, who inspired Dracula's legend. Transylvania is arguably the most romantic of Romania's provinces; it offers a visual kaleidoscope of mountain peaks, wooded valleys and fresh-water streams.  The depiction of the high-roofed wooden churches, legendary castles and troubled history in the movie add to Transylvania's intrigue. Nowadays ski resorts and health spas make it a luxurious and cost effective alternative to traditional western European destinations. Starring Anthony Hopkins, Keanu Reeves and Winona Ryder, the film won three Academy Awards for Best Costume Design, Best Sound Effects Editing and Best Makeup and was also nominated for Best Art Direction.

Thelma & Louise is an American road movie starring Geena Davis as Thelma, and Susan Sarandon as Louise and Brad Pitt, in his first significant role in a major Hollywood film. The film received six Academy Award nominations, winning one for Best Original Screenplay. The pair start in Oklahoma with a desire to get to Mexico through Texas alluring viewers with the perceived size and freedom of America; although primary filming locations for the movie took place in rural areas around Bakersfield, California and Moab, Utah. To audiences it seemed a longer journey through many different areas. The famous Grand Canyon scene was not even the Grand Canyon but the Colorado River flowing through southwest of Moab.

Starring Judi Dench, Daniel Day-Lewis and Maggie Smith, the film tells the story of a woman struggling with her individuality in the face of the restrictive Edwardian culture of turn-of-the century England and her love for a free-spirited young man. The story begins in the romantic Italian city of Florence, exposing the city renowned for its monuments, churches and buildings. Flouncy novelist Eleanor Lavish (Judi Dench) whisks mousy Charlotte Bartlett (Maggie Smith) off to see the -real' Florence, starting at the statue of Grand Duke Ferdinand in the Piazza Santissima Annunziata and then going to see the monument to Dante in the Church of Santa Croce, Cellini's Perseus holding the head of Medusa and a copy of Michelangelo's David. The film won several Academy Awards for Best Writing; Screenplay Based on Material from Another Medium, Best Art Direction-Set Decoration and Best Costume.

Starring Meryl Streep and Robert Redford, Out of Africa is based on the autobiographical account of Karen Blixen, a white farmer in 1920s colonial East Africa. The film shows the life of the native people and colonial settlers in the bush country of Kenya from seaside Mombasa to Nairobi, from Mount Kenya to Kilimanjaro and in particular near the Ngong Hills outside the country's capital Nairobi. The four peaks of the Ngong Hills appear in the background of several scenes near Karen Blixen's house and local residents still reported seeing lions in the Hills during the 1990s. The mix of mountains, beaches, deserts, wildlife and wide open plains as well as colourful African tribal culture depicted in the film, make Kenya a fascinating destination. The film won seven Academy Awards including Best Picture.

Key scenes in The Sound of Music, starring Julie Andrews, are filmed in the town of Salzburg, Austria. The colours and landscape are breathtaking and it's sometimes so quiet that visitors feel they have interrupted the perfectly conserved set. Specific locations for filming include: The Benedictine Convent on Nonnberg (it is here that nuns sing 'Maria'); Mirabell Gardens and Mirabell Palace (where Maria and the children sing 'Do-Re-Mi'); Felsenreitschule (here, the Trapp Family performed its farewell song and Baron von Trapp sang Edelweiss) and many more. The film won five Academy Awards including Best Picture.

To explore these exciting movie destinations and for a great travel experience visit www.Expedia.com.au