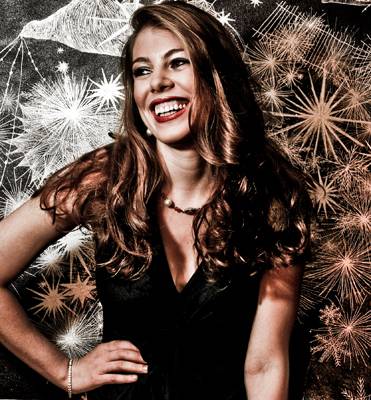 Leandra Ramm has a versatility in music that is reflected in her career to date. Opera and classically trained, she's recently been performing throughout the Caribbean and Europe as lead singer on Celebrity Cruises. Before that, she played the lead role of Annie in Hell's Kitchen The Musical at the Hudson Guild Theater in Manhattan. Another recent role was Leila in Iolanthe at the International Gilbert and Sullivan Festival, performing at the Buxton Opera House in England.

She created the role of Silvestra in the professional premier of Mario and the Magician, at the Center for Contemporary Opera in New York and she's featured on the CD of the work, under the Albany Records label.

Other recent work includes Antonia in Man of La Mancha with the Diablo Theater Company, performing at the Lesher Center for the Arts in California, and as Estelle in The Full Monty with The Media Theater in Pennsylvania.

The release of Leandra Ramm's full albums Invitation to a Voyage and One Night With You marks a new and important milestone in an amazing music career.

The albums are a compilation of recordings and live performances. The CDs include original songs such as Dream Angel, You, Still In Love With You and L'amour. She also sings Broadway favourites, classical art songs and arias with piano and live orchestra. These albums are available on itunes, Amazon and all the online music shops.

Leandra has made many television appearances around the globe, including CNN's Anderson Cooper 360, The View, Good Morning America, 60 Minutes, 60 Minutes Australia and the BBC as well as appearing on a host of international radio stations. Such celebrities as Barbara Walters, Anderson Cooper, Star Jones, Morley Safer and Robin Roberts have interviewed her.

Leandra has also been featured in the international press too including the LA Times, Daily Mirror (UK) New York Times and even as far afield as Beijing.

She made her debut at the age of 14 as a soloist in Kurt Weill's The Eternal Road with the American Symphony Orchestra, conducted by Leon Botstein and performed at the Avery Fisher Hall. Since then she has completed apprenticeships outreach tours and performances with Arizona Opera, Toledo Opera, Opera Carolina, Des Moines Metro Opera, Sarasota Opera, New Jersey Opera, Aspen Opera Theater Center, Opera Orchestra of New York, Martina Arroyo Foundation Prelude to Performance, and Center City Opera Theater. 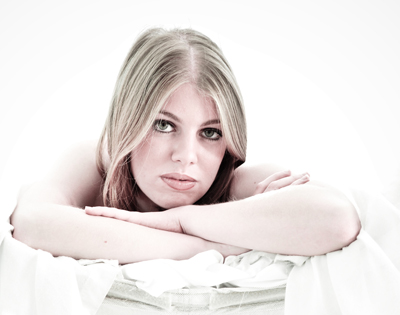 Question: How does it feel to hear your song played all over the airwaves?

Leandra Ramm: I actually love hearing my voice on the air. I hear some singers get self-conscious when they hear their own voice, but I love it. It makes me proud of my accomplishments and how far I have come in my own personal and artistic journey.


Question: How would you describe the album, One Night With You?

Leandra Ramm: My album, One Night With You, is a blend of Broadway show tunes and my original songs. The concept is that if I could have one night with you, I would sing you all these songs. When you put on the CD I want you to get a sense of who I am as an artist, showcasing my best work. I picked my favorite Broadway songs and my original songs are a blend of classical music and pop music in a style that I call 'popera'. In essence, I am a classical crossover singer...think Josh Groban or Charlotte Church. I started in opera and I now sing more popular genres but am still grounded to my roots in classical music.

Leandra Ramm: The music industry takes persistence and patience. I believe if you are at it long enough, and you have the talent, you can make it. You do have to know the right people, but I believe that you can draw the right people towards you with your talent. Before I was fully in the music industry, I had some pre-conceived ideas that it was crazy, but it's really not that bad!

Leandra Ramm: Yes, I do write my own songs. I like co-writing because the other writer and I can bounce our ideas off each other. All of my original songs so far have been co-written. For example, my song L'amour, I wrote the vocal line and the melody and some of the lyrics, but my co-writer Tony Paiano wrote the musical arrangement and Vivian Clement co-wrote the lyrics. I love this type of collaboration because I can work with other musicians to come up with the best ideas possible for the song. My inspiration changes for each song. It is usually a personal life experience that I go through or just an idea that comes to me. For that same song, L'amour, I just had this idea one day to make a 'popera' version of the famous aria 'Habanera' from the opera Carmen. I thought it would be a great idea and so I just started working on it.

Leandra Ramm: I am going to audition for Broadway shows next as I make my way back to New York City. I just finished cruising around Europe and the Caribbean as a lead singer on a cruise ship, and next for me is big auditions to be in a Broadway show! I have recently released my albums (two full albums and three singles), so I also will be doing some promotion on my CDs.

Leandra Ramm: I have had moments where I wanted to just give it all up, but my love of singing is so strong that I was always pulled back to the arts. At times show business can be frustrating and there are times you just want to go back to school and be a lawyer, but at the end of the day, the gratification of touching people's hearts with your voice is so great that nothing can beat that.

Leandra Ramm: I love both actually. They are both very different, skilled types of art forms. With live performing, the adrenaline and energy you get from the audience makes the performances sparkle with that indescribable magic. Recording is great because you can capture your absolute best moment without the nerves of a live show and you can just keep recording until you get your best take

Leandra Ramm: My first inspiration to go into the music industry was my mom. My mother is a classical pianist and a dancer. I would hear her play her own original music as a child growing up and my sister and I would dance to it. It inspired me to be creative and get involved with the arts. I studied dance, acting, flute, piano and voice. I started singing before I could talk says my mom, and always was the lead in the school musicals, but when I was 14 I won an International Competition as a vocal soloist. That's when I knew I really wanted to focus my attention on singing and have a career as a singer.

Leandra Ramm: My biggest challenge thus far has been that I had a cyber stalker for six years. I was targeted by a man I never met, but used the internet to try and ruin my reputation. It was awful. WIth a lot of time, faith, effort, and patience, however, I was able to get him arrested and stop bothering me.

Leandra Ramm: I don't really have a typical day, because I am always in different places depending on where I am singing. For the past 8 months I was on a cruise ship where everyday I was in a different country or city! No matter where I am or where I am singing, however, I always try and fit in time for vocal warmups, physical exercise or dance class, a healthy diet and quiet time for either yoga, meditation, reading or journaling.

Leandra Ramm: Singing is my favorite thing to do. I am very lucky that I can have a career in the thing that I love to do most. So my favorite part of being a music artist is simply that I can have a career in music. I was born from the Repository for Germinal Choice otherwise known as "The Genius Sperm Bank" where the donors were either Nobel Prize Winners, Olympic Gold Medalists or a highly intelligent, successful business men. You would think I would have grown up to be a mathematician, scientist, or doctor, but I have always been drawn to music and wanted to sing...ever since I found my voice I knew I didn't want to do anything else for a profession.

Leandra Ramm: 1. Appreciate what you have; Always say thank you for the blessings you have in your life.
2. Give yourself the ultimate respect, always! You have one body, one life; treat it with the utmost care.
3. Have fun! Enjoy your time and never regret. Learn from your mistakes and keep going forward. Look at your problems as opportunities to grow. Enjoying life is the best way to live and ensure more fun times.
4. Have a good balance in everything you do; balance is key to a healthy life-the ying/yang must be equal.
5. Love is the most powerful emotion. Fall in love, love yourself, love your parents or love your craft, but make sure you love!


Question: What message would you like to say to your fans?

Leandra Ramm: I love combining classical music with pop music. My music is unique because I blend the two genres together. I want to make opera fresh and new for our generation. I will continue to write original songs and share my love of music through Broadway show tunes and classical songs. A huge thank you for your support in me!