After gaining noticeable recognition from their previous three releases, Like Angels return with another fun, hard hitting but relatable track. Their new single "Teenage Dream" will be available on 13 August 2021 to accompany their upcoming self-taped docuseries "Almost Like Angels", on their YouTube channel.

Naturally gifted in music from a young age, allowed Sydney sisters Emmalisa and Sarah to develop their songwriting skills very early on. Now, still as passionate as ever about musical storytelling (as influenced by the likes of Ryan Tedder, Taylor Swift, Switchfoot & NF); Like Angels have a remarkable ability to pen meaningful, honest lyrics that connect with listeners on an emotional level - as evident in their previous three singles and now with "Teenage Dream".

In the words of Forte Mag, their "hypnotic" third single "Lose It" captured the girls "at their absolute best" and served "as a taste in the upward trajectory of Like Angels". The song was playlisted by Nic Kelly, AusPoP Now, The Underground Stage & Emo Discovery; featured by Beat Magazine, Scenestr, Forte Mag, Girl Magazine, The Partae and Australian Community Media (The Advertiser) and on Live In Sydney, Campbelltown City Council's Tourism Series "We Are Campbelltown", Sweet Sunday Sounds and The Sounds of Macarthur 100.3FM.

Now, Like angels are back with another extremely honest, relatable bop. "Teenage Dream" is a song for anyone who's ever been told not to "dream big" or that their aspirations & goals are insignificant, fleeting or something they'll eventually "grow out of". It's a call to arms for all dreamers to continue working hard and to never let the negativity or doubts of others stop you from pursuing your passion. The song is for listeners of any age - whether you're a child, teenager or an adult - it's never too early to dream or too late to do what makes you happy!

Produced by Philippe-Marc Anquetil (Little Mix, One Direction, Jessie J, Ruel), the high energy, dance worthy track will transport you into a land of teenage dreams and nostalgia. Filled with unconventional sound samples, fast paced harmonies and clever lyricism - all neatly packaged within a high school marching band beat - the song inspires listeners to continue marching onwards, towards achieving their goals. Laced with humour and sass, "Teenage Dream" is the musical equivalent of putting a middle finger in the air at anyone who has ever tried to hold you back from reaching your goals. You'll be hooked from the very first note.

Fittingly, the track will also act as the theme song for Like Angels' upcoming self-taped Youtube series "Almost Like Angels", which follows the sisters journey to reach their childhood dream of becoming international superstars, in a mockumentary style series (think "Flight of the Conchords" or "The Office").

Like Angels: Genre wise, we would describe our music as indie contemporary pop. Lyrically, our music is honest, relatable and empowering. And musically we try to keep the track arrangements really unique and interesting. We like to play with unconventional sound samples and make the production a little quirky (just like our personalities haha) to help add to the storyline or message of the song.


Question: Can you tell us about Teenage Dream?

Like Angels: "Teenage Dream" is a song for anyone who's ever been told not to "dream big" or that their aspirations and goals are insignificant, fleeting or something they'll eventually "grow out of". It's a call to arms for all dreamers to continue working hard and to never let the negativity or doubts of others stop you from pursuing your passion. The song is for listeners of any age - whether you're a child, teenager or an adult - it's never too early to dream or too late to do what makes you happy!

Like Angels: Absolutely! We hope when people hear our music they feel encouraged in their daily lives. We hope our lyrics speak to people, inspire them and that they can feel a human connection.

Like Angels: We love both! They're both so different, but equally amazing! Hearing your song come to life for the first time at a studio recording session is just as special as sharing your music in person and connecting with others at a live performance! 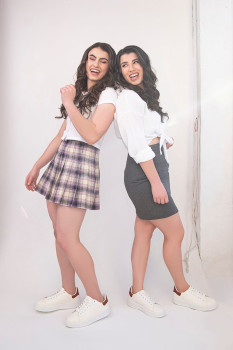 Like Angels: We're sisters, so growing up in the same house together allowed us to develop our passion for music, vocal harmonies and storytelling together from an early age! Music and creativity has always been a part of our family and was passed down through the generations and we love it so much that we decided to pursue it. We are firm believers that life is too short to spend your precious time on something you're not passionate about, so here we are!

The band name "Like Angels" was derived party from our last name "Engelbrecht", which in French means "Angel of Light". We always knew we wanted to incorporate that somehow. And then one of most frequent compliments we kept receiving was "wow, you girls sound like angels". One performance, after hearing those kind words again, we realised it would make the perfect band name...and the rest is history!


Question: Can you tell us about working with Philippe-Marc Anquetil?

Like Angels: Working with Phil is amazing! He's produced all of our songs so far and we've learnt so much throughout the process too! His musical mind and ability to build a track and produce vocals is honestly insane - he's so knowledgeable and talented at what he does! But more than that, he's just an amazing down to earth, genuine human being. We always have so much fun together in the studio and feel very grateful that our paths crossed and we've had the opportunity to work with him.

Like Angels: Music is so powerful! We believe it can bring people together, connect with someone emotionally and reach places words alone cannot. This is a responsibility we do not take lightly and always keep in mind when we write our music.

We always want to write from a place of truth and honesty so we literally take what we want to say (an experience we've had or an idea we want to explore) and turn it into song lyrics. Inspiration for songwriting is endless and it's all around us - life is a rollercoaster ride, music can help make sense of it all and help us to understand the world better.

Like Angels: We listen to so many different artists and genres! But to name a few, at the moment we've been listening to a lot of Taylor Swift, NF, Lany and Machine Gun Kelly. They're all amazing artists!

We've also made a bunch of Spotify playlists (search Like Angels on Spotify) with the songs we are currently listening to and update them frequently for anyone who wants to find out more.

Like Angels: This is such a hard question! There are so many amazing artists we'd love to collaborate with. Whenever we listen to music, we love to pay attention to the songwriting and storytelling - we love songwriters who don't waste a single word! NF is one of these artists! We would love to collaborate with him one day. He's an amazing rapper and every song he releases has a message and purpose. He's extremely detailed lyrically, his music is relatable and SO CATCHY!! You can listen to the same song over and over again and never get tired of it. So NF…if by some miracle you read this - it would be a dream to collaborate with you haha!

Like Angels: Being able to express ourselves through music and connect with others is definitely one of our favourite aspects of being music artists. We have the ability to write about personal experiences, the experiences of others or even explore hypothetical situations. How often do you want to say something, but you don't get the chance to? When you write lyrics, you can say anything! Being a songwriter is an opportunity to connect with other people and impact someone, hopefully for the better.

Everyone listens to music in some way - whether it's on the radio, or the soundtrack to a movie they're watching. It's such a powerful tool to reach people and touch the soul. If a song we wrote can bring a smile to someone's face or help them through a hard time, then that means everything!

Like Angels: We're in lockdown at the moment due to covid, so a typical day for us at the moment usually consists of: content creating, editing, managing our social media accounts, planning, writing emails etc. We have certain deadlines and goals, so we keep them in mind and try to prioritise what needs doing. Oh and of course…we have snack breaks (which are extremely important haha!)

Like Angels: "Almost Like Angels" is a new series we've recently added to our YouTube Channel. It follows our journey as sisters trying to build a successful music career and reach international fame, in a mockumentary style (think "Flight of the Conchords" or "The Office". Whilst it's a lot of satire and comedy, the series also explores some of the very real experiences we've gone through/continue to go through on our journey! It'll make you laugh, cringe and maybe even cry! We've written, produced, filmed and edited the entire series, so it's been a pretty cool experience and we hope you like it!

Like Angels: We have more new music on the way, which we're so excited to share! We also have brand new episodes of our YouTube series "Almost Like Angels" coming out each week. And hopefully, when covid settles, we'll be back out there playing live gigs again! We'd love to play at some festivals - that would be amazing!


Question: What tips do you have for aspiring artists?

Like Angels: We're constantly learning new things on this journey. Firstly, this industry is a roller coaster ride - there are so many ups and downs. It's important to remember why you started, what your goals are and to be passionate about what you're doing. Comparison is dangerous! It will get you nowhere. Everyone's journey looks different, you can be inspired by others but never let comparison or jealousy rule you. Run your own race - it's your unique journey, it won't look like anyone else's and that's okay. Focus on you, put in the hard work. This journey isn't easy - it's a marathon not a sprint. Be kind to people and genuine always - people can smell fake from a mile away! And don't forget to have fun, and to enjoy each moment, it's an adventure!