LOR: The Fellowship of the Ring 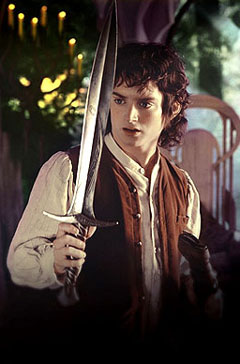 Synopsis: Set in mythic pre-historic times, a young hobbit named Frodo Baggins inherits a magic ring from his adoptive father Bilbo. Wise to the powers that the magic ring holds, the dark Lord Sauron wants it, knowing it will enable him to enslave the people of Middle Earth. In his effort to thwart Sauron, Frodo recruits the fellowship of a wizard, an elf, a dwarf and others on a mission to destroy the ring by casting it into the volcanic fires in the Crack of Doom. However, the ring unleashes its own power as a result of the struggle.

Peter Jackson's stunning version of the first of the Tolkien novels, is everything Harry Potter should have been: Magical, visionary, and escapist, yet with some genuine depth. Despite its near three hour length, "Fellowship of the Ring" is movie that transports the viewer into this Middle Earth world of hobbits and wizards, and as one watches the film unfold, one is all too aware that recent mythology, from Star Wars to Harry Potter, stemmed from Tolkien's masterful parable. New Zealand director Jackson has masterfully, along with his collaborators Fran Walsh, has taken the major elements of the first book and crafted a script that is faithful to the text while affording audiences that are new to the material, the opportunity to be introduced to these characters without needing any prior knowledge of the book. As faithful Jackson is to Tolkien, the director's own visual depth comes into play, and thus on a visual level, the world of Middle Earth has been meticulously and imaginatively brought to the screen. Shot on location in New Zealand, "Fellowship of the Ring" looks magnificent, enhanced by the exquisite production design of Grant Major and the magnificent cinematography of Australia's Andrew Lesnie. Characters and setting come dazzlingly alive in Jackson's masterful interpretation.

Jackson's casting is as perfect, from the powerful and hypnotic work of Ian McKellen as the protective wizard Gandalf, to veteran Christopher Lee as wizard-turned-evil Saruman. Elijah Wood is the perfect Frodo blending him with naivety and reluctant heroism; Viggo Mortensen is the perfectly soulful Strider, and Sean Astin is a delight as best friend Fred. Jackson's use of special effects enhances the narrative without overshadowing a detailed sense of theme and character, and the music of Howard Shore is evocative and beautifully subtle.

"Fellowship of the Ring" is a movie that transports the viewers and makes one believe they have entered this mythical world. Tolkien fans will rejoice in Jackson's faithful rendition of the material, while others will gladly be swept away by the magnificent imagery, the richness of the characters and the emotional pull of the story. A remarkable and exhilarating experience, "Fellowship of the Ring" is a masterpiece of the genre.