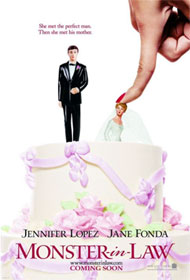 She Met The Perfect Man. Then She Met His Mother.

Synopsis:
After years of looking for Mr Right, Charlotte 'Charlie' Cantilini (Jennifer Lopez) finally finds the man of her dreams, Kevin Fields (Michael Vartan), only to discover that his mother, Viola (Jane Fonda), is the woman of her nightmares. A recently fire national news anchor who is afraid she will lose her son the way she has just lost her career, Viola determines to scare off her son's new fiancé by becoming the world's worst mother-in-law. While Viola's long-time assistant Ruby (Wanda Sykes) does her best to help Viola execute her crazy schemes, Charlie decides to fight back and the gloves come off as the two women battle it out to see just who is the alpha-female.

My Verdict:
After a 15-year hiatus, Jane Fonda returns to the big screen as Viola in 'Monster-In-Law', a romantic comedy, which also stars Jennifer Lopez as Viola's future daughter-in-law. Lopez plays Charlotte or 'Charlie', a free spirited woman who thinks she will never meet Mr Right, until she keeps bumping into Dr Kevin (Michael Vartan). Dr Kevin pursues Charlotte and they quickly decide to marry. Next step is to meet Kevin's mother (Charlie's parents are both deceased). Upon meeting Charlie, the recently retrenched four-time married Viola declares a silent war to scare Charlie off her precious only son Kevin, before they have a chance to marry.

This premise sounds like it has plenty of potential, but the execution is severely left wanting. Everyone knows of someone who indeed has a monster-in-law story to tell, but to watch what Viola is capable of is a little too excessive, as is the retaliation from Charlie. It's just as well Jane Fonda is the wicked witch involved as she saves the movie by her over-the-top display as the neurotic son-obsessed, drama queen mother who knows no boundaries, and boy does she milk her role for every ounce possible, ultimately ending in a showdown with her own mother-in-law.

Jennifer Lopez is just so bland and boring as Charlotte and doesn't really have enough guts to convince that she could take on Fonda's character. Michael Vartan is almost a sidebar in his role as the medico Kevin and doesn't bring any dynamics whatsoever to the proceedings. This is left to Viola's personal assistant Ruby played with verve and gusto by Wanda Sykes. She gets most of the biting wit to deliver although sometimes the lines feel very much American sit-com style - let's stand and wait for the audience to laugh before moving on.

While there are a few genuinely funny moments in 'Monster-In-Law' there is also a fairly predictable conclusion making it a pity that Fonda's return to movies is in such a uninspiring movie that just reeks of an overly long skit trying to be a feature length movie.