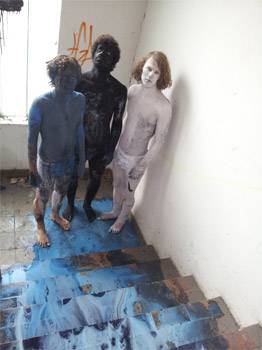 Progressive rockers from the heart of Europe, Austria's very own Mother's Cake will make their first ever visit to Australia in February 2014. Mother's Cake will be showcasing tracks from their debut record -Creation's Finest' including single -Soul Prison' which features Ikey Owens from The Mars Volta on keyboards. The album is due for Australian release in February 2014 through Inaway Records.

Mother's Cake was founded in 2008 when three musicians came together to embody the spirit of revolution and change of the 1970's with the concurrent tendencies of their generation. The trio, consisting of the outstanding individual musicians Yves Krismer, Benedikt Trenkwalder and Jan Haußels, features dynamic and ambitious songwriting that reminds of legends like The Mars Volta, Led Zeppelin and Jimi Hendrix. Mother's Cake's music is based on a complex netting of rhythm and harmonic possibilities without losing its own authenticity or having the effect of artificiality. Their lyrics express feelings of revolution, love, independence and freedom.

Question: What are you looking forward to about touring Australia?

Mother's Cake: The first sunburn in two years; being bitten by a poisonous animal; first breakdown with the next service station being at least 200km away; on the edge of death, trying to surf like the pros do; having a beer or two with some Australian fellows and listen to all those sick bands performing with us! You can see: we're expecting quite a lot from Australia!


Question: What should we expect from the upcoming album release?

Mother's Cake: An awesome piece of music! Hope you like it.

Mother's Cake: Yes we do write our own songs! Inspiration comes from each part of the band as well as experiences made on tour and the usual: a famous man once said: good artists copy, great artists steal.

Mother's Cake: Bands we listen to are mostly kind of random. We try to keep our mind open for new stuff. But sure, there are favorites: TMV, QOTSA, ACDC, Wing (!!!), The Beatles, Queen, Nik Bärtsch & Ronin, Bonobo, Wolfmother, Muse and so on...

Mother's Cake: YES/YES/YES – no dates yet – we learned in the past that we're late on every date we announce – awkward. But 'a good thing takes time'!

Mother's Cake: There are and I guess always will be. To requote ACDC: it's a long way to the top if you want to rock'n roll – true words spoken by wise men!

Mother's Cake: Definitely live performing. Our music is written during jams and perfectly resembled in our live performances. We try hard to take the audience to a place where the people can forget the daily sorrows – after four years of playing gigs we do pretty well succeeding at it. These moments are priceless on stage!

Mother's Cake: Hendrix @ Woodstock, Led Zeppelin @ Royal Albert Hall, Pink Floyd @ Pompeii; Those kind of shows inspired us to be musicians. We still have a long run and it's a long shot but still worth trying it.

Mother's Cake: It-s always the money – so far each and every penny we earned playing went straight back investing into some recordings, videos, merch, cars and those million things a band needs to buy. Keeping everyone happy without paying them for their great work – I guess it would be impossible if it weren't for everyone's passion.

Mother's Cake: Cold, snowy, windy and a huge fight getting the ass on the bike and into the rehearsal room.

Mother's Cake: The first time we went to perform on stage and realise that it wasn't just us enjoying our music.

Mother's Cake: We are just in the making of a live video called 'Mother's Cake And Friends' which will be released in spring 2014. We collaborated with Heidi, Andreas Tentschert and Charly Maier. All three fantastic local musicians as you will hear and see in the video. As for worldfamous names: why not a little drum feature of Dave Grohl, an organ solo by Shaun Martin and a bass lick made by Les Claypool- who could possibly say no to such artists?

Mother's Cake: We went for the formula displeasing and easy to remember = perfect name.

Why displeasing you ask? In German it has ambivalent translations. But you'll have to find that out yourself!