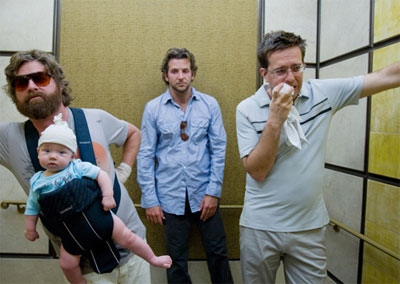 BOX OFFICE AWAKENS TO "THE HANGOVER"

Warner Bros. Pictures and Legendary Pictures' new comedy "The Hangover" took the top spot at the U.S. box office in its opening weekend, surprising industry analysts. On the heels of critical and audience raves and a multi-targeted marketing campaign, "The Hangover" earned an impressive $44,979,000 in its opening weekend, making it the third-highest opening of an R-rated comedy ever. For Warner Bros., it is also the sixth film to open at number one in 2009 to date.

Jeff Robinov, President of Warner Bros. Pictures Group, stated, "Coming into this weekend, we knew we had across-the-board great reviews, extremely strong word of mouth, and a marketing campaign that I would simply call amazing. As importantly, we had a movie that delivered. Congratulations to everyone involved in the making of 'The Hangover,' including the entire cast and crew and the producers. And special congratulations to Todd Phillips, who has been a great collaborative partner and an important member of the Warner Bros. family."

Sue Kroll, President of Worldwide Marketing, Warner Bros. Pictures, added, "From our earliest screenings, we knew 'The Hangover' was something special. Todd made a brilliantly funny movie and we wanted to craft a very strategic and creative marketing campaign to match. Aggressively utilizing both the mainstream media and the internet, we set out to make this an all-audience film. We found unique ways to introduce the concept and the characters, leaving no chicken or tiger unturned. The wealth of material-not to mention a director and cast who worked tirelessly to support the film-gave us so many avenues to explore in putting together an all-encompassing and pervasive campaign. By the time we opened, we had not only created awareness but a definite must-see vibe surrounding the film. Jeff, Dan and I are also proud that 'The Hangover'-added to such comedy hits as 'Get Smart,' 'Yes Man,' 'Four Christmases,' 'He's Just Not That Into You,' 'Sex and the City' and '17 Again'-once again emphasizes our growing success in the comedy arena."

Dan Fellman, Warner Bros. Pictures President of Domestic Distribution, added, "We are obviously thrilled with the box office results for 'The Hangover,' which came into this weekend against some very strong competition. The film did not have the benefit of instantly recognizable star names and it was not in the category of a big action blockbuster. But Todd Phillips does comedy like no one else and we knew 'The Hangover' was that rare gem of a comedy that plays to audiences of virtually every demographic. And it did. Based on this weekend's overwhelmingly positive audience response, we anticipate that the excitement will continue to build through the summer as moviegoers turn out to get 'The Hangover.'"

From director Todd Phillips comes a new comedy about a bachelor party gone horribly wrong. Two days before his wedding, Doug (Justin Bartha) and his three buddies (Bradley Cooper, Ed Helms and Zach Galifianakis) drive to Las Vegas for a blow-out night they'll never forget. But when the three groomsmen wake up the next morning with pounding headaches, they can't remember a thing. Their posh hotel suite is beyond trashed and the groom is nowhere to be found. With no clue about what happened and little time to spare, the trio must attempt to retrace their bad decisions from the night before in order to figure out where things went wrong and hopefully get Doug back to L.A. in time for his wedding. However, the more they begin to uncover, the more they realize just how much trouble they're really in.