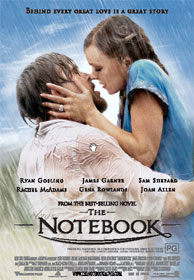 Behind Every Great Love Is A Great Story

Synopsis:
A young woman comes to the coastal town on Seabrook, North Carolina in the 1940's to spend the summer with her family. Still in her teens, Allie Hamilton (Rachel McAdams) meets local boy Noah Calhoun (Ryan Gosling) at a carnival. Though she is a wealthy debutante and he is a mill worker, over the course of one passionate and carefree summer in the South, the two fall deeply in love.

Circumstances -and the sudden outbreak of World War II - drive them apart, but bot continue to be haunted by memories of each other. When Noah returns home from the war year later, Allie is irrevocably gone from his life, but not from his heart.

Though Noah doesn't yet know it, Allie has come back to Seabrook, where they first fell in love. But now Allie is engaged to marry Lon (James Marsden), a wealthy soldier she met while volunteering in A GI hospital.

Decades later, a man (James Garner) reads from a faded notebook to a woman (Gena Rowlands) he regularly visits at her nursing home. Though her memory has faded, she becomes caught up in the fiery story of Allie and Noah - and for a few moments, she is able to relive the passionate, turbulent time when they swore they'd be together always.

My Verdict:
'The Notebook' tells a familiar story of a summer romance during 1940 that is interrupted by the wealthy parents of a young girl when they learn she has fallen in love with your average local boy with no prospects. This premise is nothing new, but it is the addition of the reading of the notebook from the title that adds such a special dimension to the film.

'The Notebook' is based on the novel by Nicholas Sparks and set in North Carolina, although filming took place in South Carolina. The outdoor locations for the film have a special feel about them, with the opening sequence of a rower on a lake set to a beautiful piano piece that is very moving and a taste of things to come.

This is a love story that is a genuine weepie, and that's not meant to be patronising. Not many of these romances are present at the cinema anymore and it's a shame because if done well, they can offer so much. 'The Notebook' does offer so much, partly because it's a great story but also because of the four leading cast members. James Garner is simply superb, as always, as the adoring, caring man who reads from the notebook to Gena Rowlands, a genuinely elegant lady suffering from dementia. Sections of the romance are played out in sequence, and then interrupted, as Garners' character has to stop to allow for the daily life of his character. Ryan Gosling and Rachel McAdams, carry the bulk of the movie as they play out the young loves in the story, and do it so well.

'The Notebook' is rich in love, of lost chances and of the everlasting power of love and definitely deserves a chance.