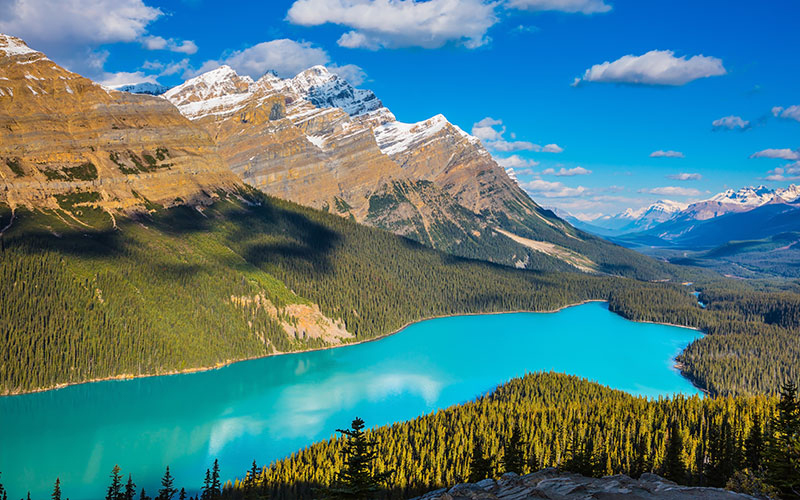 These Are Officially The Most Beautiful Natural Wonders Of The World, According To Science

To reveal which global natural wonder is officially the most beautiful, luxury travel company Kuoni ran a study that used eye-tracking technology to discover which natural landmarks the human eye is drawn to the most.

The study used a unique way to gather the data, participants were asked to look at a series of images of 50 of the world's most famous natural landmarks and their eye movements were tracked using AI technology, data on which images drew the eye for the longest was then analysed to reveal the most eye-catching natural wonders.

The study results show that it's Peyto Lake in Canada that is officially the most beautiful natural landmark, followed by Meeru Island in the Maldives and the Jurassic Coast in the UK.

North America is the continent with the most beautiful natural wonders, with five from the US, Canada or Central America in the top 15 including Yosemite, El Yunque National Forest and the Grand Canyon.

From waterfalls to lakes, it's interesting to see that water-based natural wonders dominate the top list. Alongside Peyto Lake in Canada, that takes the number one spot, the calm but breath-taking Lake Tekapo in New Zealand places fifth. Two caves also make the list, Puerto Princesa Underground River in the Philippines and the ethereal Marble Caves in Chile, as well as two waterfalls (Niagara Falls and Iguazu Falls in Argentina/Brazil).

About the top 10 naturl wonders

This striking lake in North America is known for its turquoise blue colour, which looks even more impressive contrasted against the dark forest that surrounds the shoreline. An incredible destination, the water gets its stunning bright blue colour from the glacier water feeding the lake. It's a popular sightseeing destination for tourists who also want to explore the local mountain area, with plenty of hikes and impressive driving routes.

This tropical paradise located in the Maldives was one of the most eye-catching destinations according to the research and it's easy to see why. With its clear blue water and bright white sands, it really is a dreamy destination for those looking to escape to somewhere beautiful as Meeru is only accessible by boat. The small island features a luxurious resort, with beach and water villas for visitors to unwind and experience the trip of a lifetime.

The 95 mile stretch of coast, running from Exmouth in East Devon to Studland Bay in Dorset is famous for its impressive views and historical features. A World Heritage Site, the coastline attracts plenty of tourists each year who come to explore, walk, hunt for fossils and take in the stunning views across the English Channel and shores. Along the stretch of coast, you'll find stack rocks, pinnacles and arches, including one of England's most iconic landmarks, Durdle Door.

This impressive National Park is located in California's Sierra Nevada mountains and is known for its giant sequoia trees, waterfalls, granite cliffs, lakes, mountains and diverse plants and animals. Whilst it may not be the biggest National Park in the USA, the 750,000-acre park is a bucket list destination for thousands of travellers. With its breathtaking views and dramatic landscapes, this place has something for everyone - whether you're looking for challenging hikes or gentle strolls through the forest.

Lake Tekapo, located in New Zealand is the second-largest of three lakes running along the northern edge of the Mackenzie Basin in the South Island. The lake is fed by water coming from the Southern Alps, with the snow melt water giving the lake its stunning light turquoise tint, a very distinctive colour that helps make it one of the most magnificent natural wonders. Lake Tekapo is also one of the sunniest places in New Zealand, with an average of 2,400 sunshine hours per year.

Niagara Falls is located on the Canadian and American border is made up of three different waterfalls, the American Falls, Bridal Veil Falls and Horseshoe Falls. A stunning natural wonder that is extremely popular with tourists, over 8 million travellers visit the iconic waterfalls every year. Most people take to the water to get as close as they can, with boat trips running visitors up to the base of the falls to fully experience the landmark.

Located in Snowdonia National Park in North Wales, Wales' highest mountain attracts thousands of visitors each year who take on the challenge of hiking to the top. With an impressive elevation of 1,085 metres above sea level, hikers are rewarded with impressive views across Snowdonia, Pembrokeshire, Anglesey and Ireland. There are a number of routes to the top of the mountain, with paths suited to most abilities looking to take on the climb.

A protected area in the Philippines, the underground river contains outstanding biodiversity and is located in a beautiful surrounding. Many describe the experience of visiting as 'otherworldly' as travellers get the chance to paddle through the impressive cave systems, taking in the natural beauty around them. The cavern itself features eye-catching rock formations and visitors are able to experience the stunning surroundings up close and personal.

The Marble Caves, also known as Cuevas de Mármol, can be found in the Patagonian Andes bordering Lake General Carrera, a remote glacial lake spanning the Chile – Argentina border. The unique geological formation, made of solid marble, has been worn away by water for over 6,200 years – making this one of mother nature's natural beauties.

Located in north-eastern Puerto Rico, the El Yunque National Forest spans over 28,000 acres making it the largest plot of public land in the country. With ample rainfall each year the forest is jungle-like, with waterfalls and rivers making it the perfect home for over 200 species of trees and plants. It's one of the most popular tourist attractions in the country, with both locals and visitors exploring the many hiking trails.