AlienBlaze Broken Hearted Or What 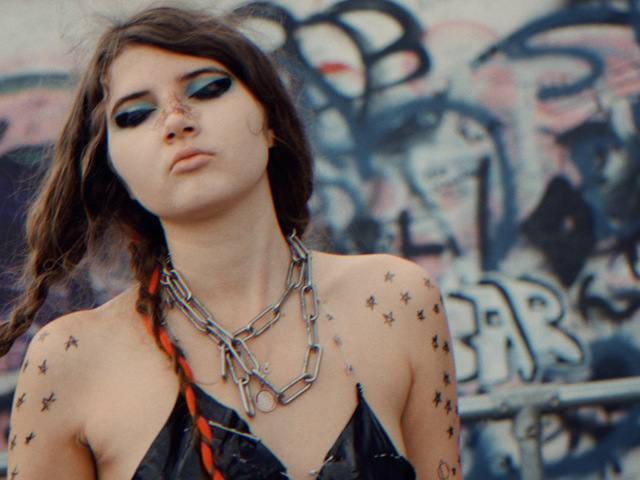 AlienBlaze is a 19 year old mad as hell singer/songwriter and lead guitarist from the UK. Known for her empowering lyrics, gritty, distorted instrumentation and fierce, energetic delivery, she injects her sound with a healthy dose of badass invigoration. Exploring a realm of different genres, the result is a fascinating hybrid of everything from goth, grunge and emo, to rock and more electronic elements. Her dominating presence emits an angsty appeal, encouraging a sense of self-empowerment through a pleasingly chaotic lens.

Finding influence from bands such as The Cure and Bring Me The Horizon, AlienBlaze has crafted a sound that embodies the spirit of music that has inspired her through the decades, tuning into a frequency that caught the mood of the times. Covering topics such as the everyday experiences of a young adult, to more poetic themes including pathetic fallacy and imagery from nature, AlienBlaze delivers her message in a way that allows listeners from all walks of life to interpret it. She explains, "I consider my music to be slightly 'genre-fluid' because I take inspiration from many different sources. I like my lyrics to be poetic and different, and hopefully everyone can relate to the sentiment in the songs."

The upcoming single "Broken Hearted Or What?" represents the different moods someone goes through after having a breakup. The conflicting emotions are reflected in the harsh bass lines and washes of more nostalgic, floaty moments. The artist shares, "I had also gone through a phase of watching lots of John Hughes films, hence the lyric 'treat me like an 80s film'. The chorus however is the conclusion, basically saying to get over it and be a strong person."

Her 2020 release "Romantically Dead" received attention from numerous Spotify editorial playlists, garnering hundreds of thousands of plays. She has also had praise from the likes of Oli Sykes (Bring Me The Horizon), Rou Reynolds (Enter Shikari), Grimes, Ellie Rowsell (Wolf Alice) and Alice Cooper. With a name like AlienBlaze, the young musician takes listeners into an undiscovered cosmos, staying true to her ethos of, "I don't want realism. I want magic!"