Every once in a while a pop song bursts in from outer space to stop you in your tracks, and lift you to higher state of exhilaration. -Frequency', the debut single from Bielfield is that song. A supremely funky and spirited release which boasts a feel-good energy and highlights a phenomenal new talent, unlike anyone else you've ever heard before. Bielfield is an US-born, singer/songwriter with a prodigious talent, signed to Sony Music Australia, getting ready to break out of Australia, ahead of his global rise to pop stardom.

Born and raised in Miami, Florida, Bielfield is a self-confessed pop fanatic who's written and performed pop music from an early age. Recognised for his musicality and talent, he went on to at attend New York University as an Undergraduate, before attending the prestigious Julliard School for his Masters Degree. Over the years Bielfield released a couple of specialist albums and performed around the globe, but after completing his classical training he decided it was time to try something else and return to his love of pop.

'Right now it's becoming very cool in New York for a lot of younger classically-trained singers to go and experiment with pop music. With me it's almost like having two different characters inside of me, who have two different careers, and two different artistic objectives. When you listen to the music on this project it's about really personal life situations and intimate feelings, whereas classical music is a more traditional expression of art and society."

Whilst touring Australia in 2013/2014 Bielfield came to the attention of Sony Music who were extremely impressed with his breadth of talent, and signed the singer to a development deal which allowed him to develop his own sound.

'One of the first things I realised was that alongside the melodies, I would also have to write the lyrics myself because I'm not Australian and my diction is quite different. Anytime I would get suggestions from a writer it wouldn't match the way I naturally deliver my vocals. The only way around that was to write the lyrics myself so I was able to sing it properly. I've really spent the last six months becoming more of a songwriter and a lyricist. I've been working and co-producing with Louis Schrool [Tina Arena, Guy Sebastian] who's helped me along my way."

Now living in his -adopted-home' of Sydney since early 2014, Bielfield has spent time developing his pop musical-identity.

'It took a long time for me to work out the right style of music of me. It was really tough but it's really come together as something I'm proud to call my own. I feel like it's actually a different person making this record to who I was a few years ago. The truth is, despite my classical training, the only music I really sit down and listen to is pure pop, R&B and rap music, or classical music. I've never been a fan of the worlds meeting in some sort of fusion – I like one style or the other depending on my mood. I'm from Miami and so all we ever listen to on the radio is pop or R&B music. It's that side of me that's making music right now, and I'm loving it."

Breaking new ground, Bielfield possesses an incredible five-octave range vocal, similar to that of Mariah Carey and Celine Dion), and is thought to be the first male artist to record with such ability.

'Some days I actually have a six-octave range! It really depends on the day, because some days I lose my whistle-tones. I've never heard a grown man use that kinda range before and I'm pretty sure no other man has recorded whistle-tones before. In that sense I think what I'm doing is quite unique.

'Right now I've written about ¾ of the album, and there's no whistle tones in any of the other songs I've written right now, aside from the lead single. I'm not planning on doing it all the time as some type of trademark, but at the same time it's part of my ability, so when it suits a song I'll be utilising my full range to stamp it with a unique flavour."

Lead single -Frequency' is an irresistible pop/R&B affair; a feel-good slice of Maroon 5"esque pop which, aside from showcasing Bielfield's talents, is sure to bring a smile to people's faces.

'It actually wasn't meant to be the first single at all, but Sony just loved it. The way the bass drops really low in the song is just in such opposition the high whistle-tones in my voice, and in that sense it makes so much sense that the single is titled -Frequency'.

Producer/songwriter Louis Schrool praises the uniqueness of this project. 'Bielfield's vocal ability is like no other. He's got 5 octaves, so he can literally sing anything. It's a joy to work with someone that talented. I don't think I've ever heard a man singing whistle-tone, but that's exactly what he does on -Frequency'. It's quite simply unbelievable."

With the stars aligning, it all looks as if Bielfield is ready to take the world by storm with his own style of unique feel-good pop.

'I didn't go into this project just on a whim. This is something I truly love to do and want to challenge myself with. I want to explore pop sounds and push the boundaries. I want to be a part of people's days; waking them up in the mornings with strong melodies that make them feel good and lift their spirits.

'We all owe it to ourselves to explore our talents. I'm a singer, and I want to sing – that's just who I am."

Bielfield: I would describe my music as a collection of everything that I have loved in my life. Growing up in Miami, I had a strong understanding of rap, soul and funk; I try to incorporate as many elements as I can from my childhood into my music.

Bielfield: I thought that there was more magic happening on the other side of the microphone. But what I've learnt is that most of the strongest vocals your hear on songs - are actually being performed! 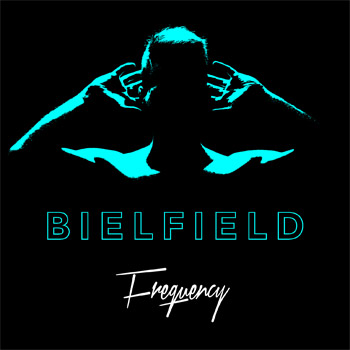 Bielfield: Yes! - I write the lyrics and top line melody for all my music. I also co-produce with Louis Schroll. At first I didn't know if I would be able to write music and lyrics…But it turned out that when I allowed myself to be inspired by great singers like Whitney Houston and Michael Jackson, I was able to perform from the heart and start writing from a really deepplace of emotional depth.

Bielfield: I have a lot of songs that are sounding really good right now I probably have written a good 4 albums worth of music! There are so many options - it's just crazy! But I want people to hear the best of what I've got.

Bielfield: There was a moment actually... I was writing songs with really talented people - but at the end of the day it wasn't me…..They were great pop songs but they weren't me. I had such a hard time finding my style – trying to figure out exactly what was Bielfield….But when I met with Louis Schroll - my procurer for -Frequency' - everything clicked and everything came together…I now know what I'm doing, and know what I want.

Bielfield: What I love about recording is that I can go through phases where all I want to do is record in the studio. But as soon as I finish, I crave to be performing the songs I've just written and recorded!

Inspiration: When I was younger I used to sit around in my living room writing songs with my sister and singing covers of other people songs…a lot of my inspiration still comes from her, and thinking back on when we used to sit and play music together.

Bielfield: There have been so many challenges…Every time that I have thought that end is Near, something happens to pick me back up. I actually got my tonsils out in my final year of university" I thought my voice was gone forever. I had to stop singing completely, and when I started singing again. I could only sing five notes. Luckily I had people in my life who kept me singing…kept encouraging me until I fully recovered.

Bielfield: Ha! I usually get my coffee -my liquid life' from the corner store and get some Toast. I'll usually go on a walk, (whilst singing!) Then I'm usually in the studio or out and about. But the beauty of industry is that every day is different, every day is a challenge.

Bielfield: Sharing my art with the world – and having the opportunity to be able to tour this beautiful country. I also love being able to meet people who are as excited as I am aboutmusic.


Question: What is the story behind the name, Bielfield?

Bielfield: Bielfield can be anything! Yes, it is my last name, but it can be greater than me. It is the production. It is me with singing with a full band. It can be a DJ playing my music. It is all the other elements and people involved – it's not purely me. I know that might sound a bit weird!