Britney: At The Crossroads 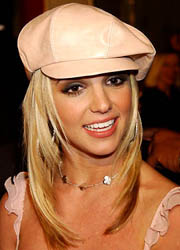 She may be 21, but Britney Spears seems to have it all: beauty, brains, sex appeal, wealth and fame. Add to that the starring role in her first movie, and Britney has stretched beyond sheer icon status to movie star. But deep down, as PAUL FISCHER discovered, lay a more earthbound young woman who simply can't believe her good fortune.

Britney Spears looks like any other young woman when she walks into a room. Her trademark blond locks neatly grace her shoulders; she wears a simple but attractive floral top and jeans. For one of the world's true young musical superstars, Britney is happy to shrug off the 'stardom' label and not feel too overwhelmed by it all. "I think it's all very flattering to tell you the truth", she explains in her gentle Southern drawl. "Honestly, this is my dream come true and I can't believe that it's happening right now and I can't even believe I have a movie, so I feel very blessed to be where I am right now."

The movie she speaks of is the sweet-natured road film, "Crossroads", the story of three childhood friends, Lucy (Spears), Kit (Zoë Saldana) and Mimi (Taryn Manning), who, after eight years apart, rediscover their friendship on a cross-country trip. With barely a plan, practically no money but plenty of dreams, the girls catch a lift with Mimi's handsome mysterious friend Ben (Anson Mount) in his '73 Buick convertible. Along the way they not only gather experiences that will change their lives forever, but they also discover how important it is to hold onto their hearts' desires. It was a script that Spears and her team developed specifically for the singer, who had clear input on how the script would be developed. "I had a lot of input into these characters and what they were all going through", she says. "But the whole storyline in terms of what Lucy was going through and why Taryn's character was going, the writer helped with. So it was like a combined effort between both of us." Britney also had a say in the casting of her leading man, which meant kissing a lot of guys eager to play her love interest. "It wasn't fun doing THAT", she says laughingly, and no jealousy from boyfriend Justin.

The opening of "Crossroads" has Spears dancing in her underwear to Madonna's 'Open your Heart to Me' "which is one of my all time favourite songs. It was great to dance to it in the movie because it's such a light-hearted, fun song and something that all girls like." As for dancing around provocatively in her underwear, Spears defends that decision by maintaining that "it's real. I personally sleep in a T-shirt and she just had her little briefs on and is chillin'. That's just what we do - or at least me." Britney DID make sure that she didn't embarrass herself in front of the crew, "by making sure that of course not that many people were on the set, but it's part of the character and what she was about, so I thought it brought a realness to it." As for boyfriend Justin being jealous of her various love scenes in the film, Spears says there was none of that. "He knows that's a part of what we do, even though I personally don't like it very much and it doesn't make me feel like a million dollars, but I just accept it's acting." 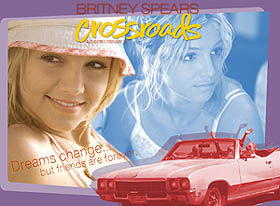 It's not easy for singers to make the transition to actor. Mariah Carey's recent attempt was disastrous. Britney has no idea whether she will succeed where others before her have failed. "I don't know, man. I don't know how my movie's gonna do; I'll just see how it does and if it is a big flop, then I'll know what NOT to do next time."

Spears was born in Kentwood, Louisiana in 1981. After sharpening up her teeth in local dance showcases and church choirs, at age eight she auditioned for a role on the Disney Channel's "Mickey Mouse Club" show, and although the series' producers deemed her too young for the job they were sufficiently impressed with the girl's talent to assist her in gaining entry to New York's Off-Broadway Dance Centre and the Professional Performing Arts School.

After a series of television commercials and stage appearances, at 11 Spears finally joined "The Mickey Mouse Club", where she remained for two years; continuing on as a solo artist, she signed to Jive Records and in early 1999 issued her debut LP ..."Baby One More Time". From that time on, the beautiful blonde performer hasn't looked back. Despite her extraordinary success, Spears insists on keeping her life in perspective, and despite being bombarded with offers, keeps her own life in check by listening to her mother, with whom she remains close. "She always told me to remain true to yourself, don't take any bull from anyone and show 'em what you got." Nor does she take any 'bull' from her critics. "They can talk about personal stuff as much as they want, but as long as they don't talk about [touch wood] my performance and what I do. So far they haven't." As for those who criticise her move towards being more provocative on stage, Britney remains nonplussed. "Everyone's entitled to their own opinion. I do what I want to do, I get on stage and I love to perform. So you either come, watch it and you like it, or you don't." It's that simple philosophy that keeps her focussed, she insists.

When not sticking to an almost ridiculously busy schedule, Britney listens to Otis Redding. "I love him, man; I think he's just awesome. There's nothing better than putting him on, getting in the tub, lighting some candles and just chilling." Britney also loves "hanging out, ordering room service, watching TV and I'm addicted to spas and massages." She also hangs out with her closest friends - three of whom she has been close with very much pre-fame. "I'm very blessed with the friendships I have. What inspired me to do "Crossroads", in part, is the fact that I still have my girlfriends that I grew up with. We just feel comfortable with each other, we're honest and we're total goobs. But honestly, I thought everyone had that, and I hope young girls will see this movie and be inspired by that."

Britney admits that her music career is currently on hold; the acting bug has caught her in a big way. "I'm going to try the acting thing for a little while; it'll be a while before I do another album."