by Paul Fischer at the Sundance FilmFestival.

KEIRA TAKES SUNDANCE AND THE WORLD BY STORM.

In the thick of Park City, Utah, home of skiers and movie lovers, that annual love fest of Indie cinema known as the Sundance Film Festival is in full throttle. It may not exactly be the arena in which one would normally find Keira Knightley, that tall, languid British rose, who has suddenly, almost inexplicably it seems, risen to the top of Hollywood's A-list.Perhaps that explains the frenzied scene on top of Park City's hub offrenzied activity in Main Street where outside one of the area's more chiceateries, the paparazzi are gathered en masse, crowded around with avulture-like intensity, ready to pounce upon this tall, British lass, withan all to eager ferocity. Such is the life of a now popular film star, butbeing leapt upon by photographers and a throng of enthusiastic onlookers, isnot something Knightley, at near 20, enjoys, to put it mildly.

Away from thefrenzied scene outside, as we chat in a dimly sit section of Main Street'sChamaya restaurant, Knightley, dressed appropriately for the wintry ParkCity, is relaxed and in god humour, as she smilingly compares the Paparazziscene to a classic Hitchcock film. "It was like a scene from The Birds," shebegins, then breaks into a quiet laughter. "It was like at first there werethree, there were eight, then there were ten, then there were justmillions of them, and it was like 'oh my God'." Knightley, whose exposure tofame has occurred in such a short space of time, says that her exposure tothe press is uncomfortable because that is not something she expected frombeing an actor. "I think it was Tom Hanks who said: 'I just don't want tobe near you all the time, because if I was completely comfortable being MEall the time then I wouldn't be an actor since I wouldn't feel the need tobe many other people.' I guess that's true," Knightley concedes, who was atSundance to promote the sci-fi thriller The Jacket, in which she playsJackie, a very American, unglamorous role, poles away from the personas shecreated in Love, Actually or Bend it Like Beckham. "I feel very comfortableplaying Jackie where you can explore emotions that normally you'd run awayfrom and because it's not you that's exploring them. Suddenly you're freeand you can really look into it, whereas if it was me, I'd turn away fromthe emotion. As soon as it's meant to be me, it's a very scary thing to havepeople actually looking at you as opposed to looking at your character."

In the three years since Bend it like Beckham placed Knightley in the centreof an unwanted attention, the young actress has had to learn to deal withthe nature of fame and celebrity, all of which seems far removed from herMiddlesex background, as Hollywood celebrity rears its ugly head. ButKnightley remains philosophical about her sudden road to fame and glory, yethates the tabloid journalism that is part and parcel of her success."Without complaining about it, it's hugely invasive and uncomfortable. Idon't read any magazines or newspapers any more, because I find it reallyscary and I get really scared when I'm followed by photographers. I have, onmany occasions, broken down in tears because I find it terrifying and Idon't know why," Knightley concedes, adding that once the mystery about youhas been eradicated, there is no point in the public seeing you on thescreen.

Yet despite the by=product of fame and celebrity, Knightley wouldn't have itany other way, because acting is what she has always known and loved. Thedaughter of actor Will Knightley and playwright Sharman Macdonald, it was atthe age of three that young Keira requested an agent, so her dutiful parentsallowed her to work on productions in her summer holidays. Her first rolewas at the age of 9, in Moira Armstrong's A Village Affair (1994). However,Knightley's first high profile role came in 1999, as Sabe, Decoy Queen toNatalie Portman's Queen Amidala in Star Wars: Episode I - The Phantom Menace(1999). Since then she has completed an impressive array of films includingThe Hole (2001), but is probably best known for her role of tomboyfootballer Jules Paxton in Gurinder Chadha's Bend It Like Beckham (2002),before cementing her success in Love Actually and Pirates of the Caribbean.Despite her success, Knightley admits to being "desperately insecure" yetdespite those insecurities, acting is what she continues to crave, and has no idea what she would do once the acting stops, "and when I do have an idea,I'll do something else, but at the moment I dropped out of school when I wassixteen, so there's nothing else that I CAN do. If I knew what I wanted tostudy I would actually go back to studying, and I'm not going to wasteanybody's time."

Knightley has no reason to be professionally insecure. After all, here sheis at Sundance promoting The Jacket, co-starring Oscar winner Adrien Brody,who plays a military veteran, returning to his native Vermont suffering frombouts of amnesia. When he is accused of murder and lands in an asylum, awell-meaning shrink puts him on a heavy course of experimental drugs,restrains him in a jacket-like device, and locks him away in a body drawerof the basement morgue. The process sends him on a journey into the future,where he can foresee his death (but not who did it or how) in four day'stime. Now the only question that matters is: can the woman he meets in thefuture, Jackie, save him? It is a character such as this, a downtrodden,impoverished American, which enticed Knightley to shed her glamorouspersona, for this less likely character. The actress says it roles like thisthat make her want to act with increasing passion. "This reminds me of whatI love to do, which is to be lost in a character, to create something, bepart of that creative process and to be with people who are true artists."

Knightley pauses, smilingly, then laughs when asked if can relate to Jackie,a woman born in deep poverty to a mother who seems disconnected from herfailed existence. "No - oh God I hope we have nothing in common." Keira'srelationship with her own mother, for instance, is a long way from themother-daughter relationship explored in The Jacket. "We're reallyincredibly close yet really different people," Knightley says, referring toher mum as "an eternal optimist and absolutely incredible. Both my brotherand I who are very close to my mum, always say she's the youngest of threechildren and full of energy. The woman never sits down and when she doesinterviews, she's out with the journalists all night and they're bothgetting pissed together. It's absolutely extraordinary and she's totally afree spirit." Knightley admits that she doesn't share her mother's sense ofoptimism, which is hard to imagine while one is sitting down chatting toher. "I'm not the eternal pessimist, but I'm certainly more pessimisticthan she and she says that I'm naturally melancholy which mum says is verytedious." Knightley adds that she has no idea why she is melancholy, butsimply realises, "that I can be a moody cow."

Yet Keira, who recently bought a flat in London which she rarely sees thesedays, is at least enjoying early trappings of success, and is more thanhappy to shirk her melancholy state, for the respite of a character. Andwhile Fate is a theme recurring throughout The Jacket, Knightley says thatto some degree, she is a believer in certain aspects of Fate. "In a funnykind of way I think I do. You know, the Celts believe in fate and they alsohave that huge guilt trip as well, so I think I've got both of that going onwithin me, but I suppose there are parts in me that go, okay if somethinggoes badly or if I didn't get a part, then I do always say that it wasfate." And what about the old idea of love at first sight, that alsoresonates throughout much of her on-screen work, as in The Jacket? "No, Idon't think so," but adds that as far as men are concerned, the actress isnot treated that differently now that she is famous. "Do you know what? I'veactually had a lot more guy friends than girlfriends. Growing up as a bit ofa tom-boy I suppose that's just the way it's been and so most of the friendsI have at the moment have been the same friends that I've had for years andyears and years. I'm not terribly sociable. and am in fact prettyextraordinarily UNSOCIABLE, so I don't meet that many people and when I do Ionly meet them through the friends I've already got." 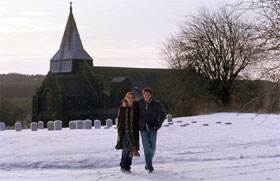 Given her professional future, however, Knightley may have little time tohang out with friends of either persuasion. She finished wrapping Pride andPrejudice, but more of interest, is Domino, in which she plays a striper,has a topless scene, but decided she was to shy to show her bum, so ended upwith what she laughingly calls "a bum double." Knightley had to choose theright posterior to of course to her own, justice. "I was standing in anoffice and women came in and started stripping," she recalls, tryingunsuccessfully to keep a straight face. "Actually - you know what - theyhave fantastic arses and it's at those points where you look at their bumsand you think you've got an alright bum and then you go okay, unless yourbum looks like that don't show it on film. If it looks like that - show itby all means, but I don't have a bum like that and therefore it will not beshown on film. I didn't know what to do and you sort of don't know where tolook, but you've got to look at their bum and then you sort of think, wellshould I talk to them, or should I not talk to them?" It all sounds like anodd way to make a living, but Knightley says, it's part of Hollywood's dreamfactory, bums and all. "What it is, is a dream world, and that's what filmsare. They're fantasies, stories, and escapism for people. Now in thatparticular scene, what they wanted was a perfect image, so in this story, inthis fantasy, in this dream, you didn't need my arse up there, you wantedsomething perfect up there gyrating around, so let's get something perfect -you know?"

While her bum may not be shown in that film, her swordplay will be back inPirates of the Caribbean 2 and 3, buit beyond that, she has no idea, if thetwo films will be shot simultaneously, or even what they're about. She hasyet to read a script, "but all I know is we're supposed to be filming inMarch." Beyond Pirates, Keira isn't sure what the future brings, but saysthat at last she knows that that she's in this game for the long haul. "I'vejust signed on the dotted line for Pirates, but I don't know what I'm doingafterwards. I know that I'm really proud of the last three films that I did.I don't know whether people are going to go - oh no you're a phoney, oractually you're okay, let's keep going. I don't think that in thisprofession, it doesn't matter how good you are or how good your work is, younever know whether you're going to carry on working or not, you reallydon't. I know I've said that till I'm blue in the face, but it's so true andI think because having been brought up in the theatre background, I've seenpeople who've gone two years out of work." Yet despite these feelings ofinsecurity, Knightley continues to remain ensconced in this most desperateof professions, even with paparazzi in hot pursuit, and the nagging worrythat it could all end tomorrow, "because getting to a set and creatingsomething is a weirdly powerful, provocative and amazing feeling and I can'timagine doing anything else and this is the only world that I know. I'vebeen brought up in it, I don't know anything else and I suppose it's theinsecurity of it that, in a strange way, that makes me feel safe."

THE JACKET OPENS IN MAY