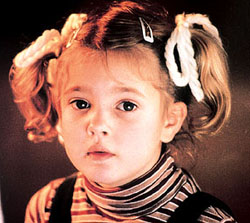 Before she was controversial, and well before she briefly married - and divorced - Tom Green, Drew Barrymore was this cute child whose portrayal of Gertie in the now classic E.T is forever etched in our consciousness. With the film's 20th anniversary fast approaching, Barrymore sat down with Paul Fischer to talk about her memories of that more innocent period in her life.

It seems only yesterday when moviegoers first saw a 7-year old Drew Barrymore screeching at E.T. Now at a less precocious 27, Barrymore recalls that more innocent time in her life, before the drugs, controversy and stardom took over. "I remember everything extremely vivid as if it was yesterday", Barrymore explains with genuine enthusiasm. "When you have to remember your lines and just be there and responsible, it stimulates your memory so well or your awareness. So, you know, it really as if it was very recent in my memories even though I'm realizing it was 20 years ago." It was only a few days prior to our meeting that Barrymore saw E.T again, for the first time in over 10 years "and it was just such an incredible film that just makes you feel so good, makes you so emotional that you just let go and enjoy the adventure of it." This time around, Barrymore saw the film as an adult for the first time and recalls just being "moved by it not believing how beautifully shot it was, admiring the scoring and music and how well the special effects were handled. It really occurred to me just what an incredible film it is on a filmmaker's level and the writing and the acting; I was just overwhelmed by how wonderful it was."

This was only the third time that Barrymore had seen E.T, each time at a different phase in her life: At age 6, 14 and of course as an adult. Barrymore recalls those different experiences. "The first time, I thought it was still in the middle of the family. We made the film. We were promoting it and everyone was still together. I was getting to travel the world and see that there were all these different types of cultures and people, as I had never been outside of California. Wow, the world was so big, and it made me so non-judgemental towards people. When I saw it again when I was 14, I had just moved into my first apartment, I was living on my own, things had been a little crazy in my life. So I'm sitting in this apartment and I'd borrowed the video from a neighbour. I watched it, I cried and I just thought: This is such a good movie. It's sweet; it's so wonderful and interesting. I don't know how much pain I really had. I just sort of watched it feeling a little distant from it and now, when I watched it THIS time, I was so happy, thinking: God, I have this great life and I feel so good and I let the film completely take me over. I was just really moved and excited and had my little tissues and wasn't afraid to cry. The film seemed better than ever."

E.T is being reissued with an additional scene and the re-mastering of some of the film's sequences, but at its core, Spielberg's much discussed sci-fi fable has emotional elements that still manage to speak to a more cynical audience. Young Drew was required to shoot a number of emotional scenes, and handling those moments, the actress now recalls, was simply part of her job. "I never took it seriously and when I had to get sad we got sad, you know? Spielberg told me that when I was doing the film that I should never act my character, that I should see my character, which is a lesson that has been more valuable to me than 20 years of acting classes just in that one thing that really hit me and gave me the key to travel the universe."

Spielberg remains one of Barrymore's strongest influences, and became her Godfather, recalling that "he was definitely the first adult male in my life that showed me trust, consistency and giving of your time was actually a very real thing and I did not believe that before him."

Barrymore's life has not been all peaches and cream. After E.T, despite starring roles in the likes of "Firestarter", "Irreconcilable Differences" and "Cat's Eye", Drew's adolescence was one of drugs and alcohol, coping with her newfound celebrity. By the mid-nineties, Barrymore found solace in her work, garnering positive reviews for "Boys on the Side", "Batman Forever", "Everyone Says I Love You", "The Wedding Singer", "Ever After" and "Never Been Kissed", to name a few. Now as prolific a producer as well as a movie star, it's hard to believe, chatting to her now, that she had a once turbulent life. Perhaps it's that turbulence that has kept Barrymore grounded. "I realized that I had to overcome the trials and tribulations of my life. You have to; you don't have a choice. And the fact is that everything in life actually IS a choice, so I just chose to experiment, get my life back on track and continue to go on an incline for happiness and enjoyment of life on a daily basis."

And Barrymore's career continues to go from strength to strength. She is producing and starring in a remake of the campy sci-fi film "Barbarella", is shooting George Clooney's "Confessions of a Dangerous Mind" and yes, Barrymore is producing and starring in "Charlie's Angels 2", about which she is most excited. "We're looking at it as this is our second case, our sophomore year; we were freshman, now we're sophomores, so it's a little bit more adult. We've grown, we know things now and I think that's reflected in the tone but it's still really true to what it is."

Now divorced, Barrymore admits to being happily single and searching for her lifelong companion. She has learned a lot since those E.T days, but asked if she would encourage her own children to be actors, Drew is philosophical. "I wouldn't NOT encourage them. I think that's what was so great about Steven is that he was so safe and unexploitative in a world of child actors that can be just very dangerous to children. It can rob them of their childhood and there is such a thing as escape smother and it can get very confusing for them, but there are some children who really want to be doing that and there are people like Steven that just make it such a safe, fun, awkward community of a lifetime environment and if my child could have that experience that would be very interesting. I think I would love to let my kids be a kid for a while and maybe when they were a little older, they can pursue it."