Queensland Children's Hospital patient, Ruby, 10, sees her heart surgeon, Dr Scott Fox as an 'older brother' getting her through five operations since she was born.

Dr Fox has been nominated as part of the Juiced TV Super Hero Awards Program, supported by QSuper. The program recognises Queensland Children's Hospital medical and support staff who selflessly dedicate themselves to the wellbeing of others.

The surgeon was nominated by Ruby, her mum, Yvette and dad, Wayne, due to his endless dedication and special relationship forged with Ruby in her almost 11 years.

"Dr Fox is so down to earth and a very dedicated and caring fellow. Over the years we've become quite close to Dr Fox and Ruby thinks of him as part of the family. We have so much respect for him," Yvette said.

Yvette acknowledged it was a hard choice to only nominate Dr Fox as he is supported by a team of experienced healthcare providers at Queensland Children's Hospital.

"There has been a whole team who has cared for Ruby during her five operations and hospital visits. They have their own lives but they show so much dedication. Dr Fox is always there for Ruby, checking in with her after every operation, no matter how late at night," Yvette said. Juiced TV – a program made by the kids in hospital, for the kids in hospital – will film a special episode to announce Dr Fox's nomination at Queensland Children's Hospital on Friday 16 August.

The episode will highlight Ruby and Dr Fox's special bond, to be broadcast on 26 August. Along with supporting the Super Hero Awards Program, QSuper will help Juiced TV increase its positive impact on the kids and their families at Queensland Children's Hospital, and also throughout the state's regional hospitals with a 'Juiced Box' mobile application.

Question: What does it mean for you to be nominated as part of QSuper's Super Hero Awards program?

Dr Scott Fox: I'm super chuffed of course. Everyone likes to be thought as a superhero and I don't necessarily think of myself as one, but I can't wait to tell my family.


Question: What do you love about your job?

Dr Scott Fox: The kids make the job. The science and the medicine is very interesting, but it's the talking to the kids in the clinics that make my day.


Question: Is it rewarding to see Ruby doing quite well now?

Dr Scott Fox: Yes, we had a lot of concerns about Ruby when she was a little baby and we weren't quite sure whether we even had options for her surgically, but it's really pleasing to see that even though she's been through five operations so far, she's done really well and has a positive future now.


Question: How long have you been at the Queensland Children's Hospital?

Dr Scott Fox: I've been at the Queensland Children's Hospital since it opened in November 2014.


Question: You've known Ruby since she's been born, tell me a little bit about her journey?

Dr Scott Fox: Thinking back to Ruby's pathway through the clinics. She was such a shy and scared little thing when she was young and she often cried during her echocardiograms but the day that she braved it without crying, that was a truly magical moment. She was so proud, and I was so proud of her as well. 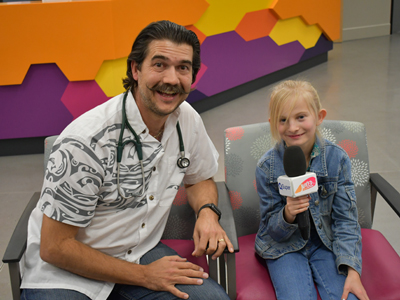 Question: Tell me why you nominated Dr Fox?

Ruby: Because he feels like he's my big brother.

Yvette: During Ruby's five lots of open heart surgeries he has always been there. You can talk to him at any time. After surgery he will always come around and check on her to see how she's going and make sure she's okay.


Question: How has he helped with your journey?

Ruby: He's made me overcome my fears.

Yvette: He's helped us get through what we need to go through. Dr Scott has been there since Ruby's birth, and he's followed our journey all the way to make sure Ruby's gotten to where she is today.


Question: Why do you love Juiced TV?

Yvette: It's there for the children to help them to think about other things so they're not focused on the pain they're in. It helps to brighten up their day and helps them to move forward to be able to go home.