A Challenge For The Iron Throne

When it comes to nutrient deficiencies in women, iron is king.
But there are four other contenders for the throne…


Now in its seventh year, Women's Health Week, (September 2-6, 2019) is a time for women to prioritise their wellbeing above others for at least five days. To help Australian women unlock the powers of better health this week (and the other 51), GO Healthy chief naturopath, Peta Teuma, has shared a handy list of the five key nutrients that women need to keep in check.

"Heart disease is often thought of as a disease affecting men but half of women over 50 die from it" says Peta. "During menstruating years women have a reduced risk for cardiovascular disease, but once menopause kicks in the cardioprotective effect of oestrogen levels reduce."

Peta points to emerging research showing that Vitamin K2 is needed for the body to properly utilise calcium and to reduce calcium deposits in the arteries, which can lead to high blood pressure and heart disease. "Vitamin K2 has also been shown to slow down the rate of bone weakening after menopause. So, if you are taking a calcium supplement, pair this with K2 or take a supplement containing K2," she says.

Calcium is known for its role in bone density but it is also necessary for many of your body's functions, such as blood clotting, and nerve and muscle function. "With osteoporosis so prevalent in older women, calcium remains a vital mineral to keep in check," warns Peta.

Almost one third of Australian women between 18-34 years are Vitamin D deficient, with a staggering 49% of all adults in our southern states deficient at this time year. This can cause problems with mood and immunity now, and bone density further down the track.

"Rates of Vitamin D deficiency have been increasing over the last decade as we become more sun aware and spend more time indoors. While sunscreen significantly reduces the risk of skin cancer, it also reduces the absorption of Vitamin D by as much as 95 per cent," says Peta.

"Vitamin D plays an integral role in calcium balance in the body, and bone health, helping to maintain and build bone density. After menopause women lose up to 10 per cent of bone density in the first five years, so maintaining good levels of Vitamin D is crucial, particularly during this period."
Try: GO Vitamin D3, 1000IU – RRP $29.99 / 150 SoftGel Capsules

Magnesium is involved in more than 300 processes in the body responsible for muscle and nervous function, energy production and bone density. "It's common for women to crave chocolate during their menstrual cycle and often this is because dark chocolate is rich in the magnesium their body needs," says Peta.

Where deficiency is the cause, magnesium can relieve muscle spasms, cramps and restless legs – a common irritant affecting a good night's sleep. It may also assist with relieving symptoms of PMS, particularly with regard to sugar cravings or headaches.
Try: GO Magnesium 800 High Strength – RRP $52.99 / 120 VegeCaps 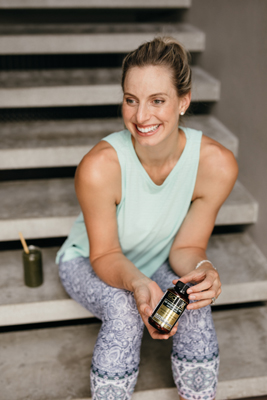 There's good reason iron reigns supreme when it comes to women's nutritional needs. A staggering one third of women suffer from iron deficiency, and likely many more from low iron levels, says Peta.

It's recommended women consume 18mg of iron daily and pregnant woman 27mg – and a serve of beef provides just 4mg. "That puts in perspective why women, particularly menstruating women, can find it hard to meet their iron needs with diet alone," she says.

Peta says a simple blood test with your GP can check your iron levels and whether you require a supplement to meet your daily requirements.

GO Healthy has just launched its iron supplement, GO Iron 1-A-Day (RRP $14.95 / 30 VegeCaps) into the Australian market. The formula combines Iron (II) glycinate with Vitamins B and C to assist with maximum absorption and red blood cell development. It is also perfect for vegans and vegetarians – a common iron deficient cohort – as they are made using VegeCaps. These are 100 per cent free from animal products such as gelatine and are easily digested once swallowed, allowing optimum absorption of ingredients.

GO Healthy stays on the cutting edge of research and looks to constantly challenge the status quo. The New Zealand brand selectively sources the best ingredients from around the world and its comprehensive testing guarantees quality and purity. GO Healthy products are available at leading pharmacies nationally.
For more information or to find a stockist, visit gohealthy.com.au