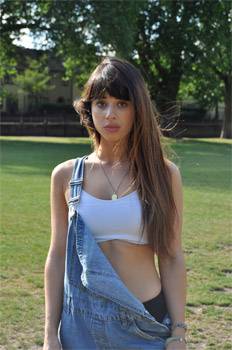 Pop always works best when there's a beating, sometimes bleeding, heart at the centre of it. The power of the dichotomy of soaring pop melodies anchored by melancholia is something Foxes, aka 22-year-old singer and songwriter Louisa Rose Allen, knows only too well. 'I always write melancholy songs but I like happy-sad," she explains. 'Songs that make you feel like everything's shit at the beginning and then everything's great by the end. It's that hope. I'm a big fan of that sort of thing and I think I live my life a bit like that." It's there in spades on her new single Youth, a sky-scraping ode to grabbing your chances set to plaintive piano and echo-laden beats, and on the gargantuan Zedd collaboration, Clarity, which has soundtracked the summer in America and recently found itself nestled happily in the Billboard Top Ten.

Youth specifically has a special place in the story of how Foxes went from singing at open mic nights to performing rapturously received shows at SXSW and being name-checked as one to watch by global megastar, Katy Perry ('It feels really really unreal, it's crazy," she says in a daze). Originally released alongside Home as a 7" vinyl single by hugely respected pop label Neon Gold, not only did Youth get her the attention of Ms Perry, it was also the song that caught the ear of Lady Gaga-collaborator Zedd, UK production gurus Rudimental (Foxes appears on their current single Right Here) and also Pete Wentz of Fall Out Boy who stopped his birthday party to ask a friend who was on the stereo before demanding she appear on the band's new number one selling album (which she does on a song called Just One Yesterday, which they performed together for the first time live at Reading Festival last month). 'There's a lot that's come from Youth," she says with a slight hint of understatement. 'For me, it makes sense to lead with it as the starting point after all of the featuring stuff. It's where it all began and it's what I'm most about - it makes the most sense."

Youth is also evidence of the fact that while Clarity may have made her a star in the US ('I get recognised in America. I've had a lot of 'oh my god, are you Foxes?'"), she's keen to prove she also has the songs to do it on her own. 'It's funny for me because the American success is an accomplishment but it feels like Clarity has done that, and while that's great, it's about what I do now with my own stuff. I think I've still got a long way to go," she says, with more than glint of determination piercing her saucer-like eyes. 'I'm excited to get the new stuff out, it's going to be really really great. This album for me is something I can't wait to have out now."

Growing up in Southampton with her mum and older sister, Louisa always knew she wanted to perform. In fact, all of the family knew she wanted to perform because that's all she ever seemed to do. 'I'd always be the kid at Christmas who would stand on the table and perform for my family. They all thought I was really annoying. I'd be singing The Little Mermaid and Celine Dion and they'd all be laughing at me." But it was this childhood filled with music that eventually helped inspire her to start working on her own songs, possibly more than she initially realised. 'I recently got back loads of baby videos and it was really weird because I'm scurrying around the floor and in the background is all this really odd music which sort of sounds like the music I make now," she explains, slightly in shock at how it's all worked out. Those sounds were actually a mixture of what her mum was into; unique female singers like Bjork, Kate Bush and Portishead's Beth Gibbons.

Having upped sticks and moved to London to do a music course, Louisa soon started to take tentative steps towards the London live scene. While the music course itself didn't allow for any real creativity, in a way it galvanised her into seeking out other ways of performing and honing her songwriting skills. 'I did a lot of open mic nights. Lots of playing to like two people that look like they want to cry," she laughs. 'It's been a journey." By this point she was performing under the moniker Foxes, a name inspired by one of her very early songs and confirmed by her mum who had a slightly odd dream in which foxes were performing some of the most beautiful music she'd ever heard. Building up her confidence on the live circuit also coincided with meeting the producer Ghostwriter who was able to draw out of Louisa something she'd found almost impossible to communicate to other producers. Together they've created the majority of her forthcoming debut album, which is currently being given some extra pop sheen by super producers Future Cut. 'I told Ghostwriter the sounds I wanted and it was a lot of fun and we'd be banging spoons together to make sounds. It didn't sound like a producer trying to make a hit," she says of the relaxed sessions. One of the first songs Louisa and Ghostwriter worked on was Youth, which along with the delicate Home were duly placed on Soundcloud simply to test the waters. As we now know, those waters have well and truly been disturbed since, with Foxes quickly becoming the name on most self-respecting pop fans' lips.

Other songs you can expect to hear on the album – due early next year - include the shimmering Let Go For Tonight, a collaboration with Jessie Ware collaborator Kid Harpoon, the 90s triphop-indebted recent single, Echo, which represented a slight shift in her songwriting. 'I don't usually write relationship songs but I wrote this song after having a bit of a spat with my ex-boyfriend," she explains. 'It's weird because it's probably one of the only ones that's based on feeling as if someone's given up on a relationship. It's about people saying they would try to make it work until there was nothing left and sticking it out until the echo of our relationship is still making a sound. It's more about feeling your relationship is falling apart and just asking for them to sort of believe in it a bit more."

For Foxes, music isn't just a hobby or a passing phase, it's something she's always wanted to do without really realising it. Her uniqueness comes not from stomping about making everyone aware of her – she's been there and done that round Auntie Joan's at Christmas – but from quietly and subtly making you fall in love with her songs. 'I'm not desperate for the fame. I don't want that part, I just want to make music," she states firmly. 'I've learnt so much this past year and now is the best time for me to be putting stuff out. I had a lot to learn and a lot of life experiences to go through and it's a better album because of it. I'm more ready for it now. For whatever happens." A quick pause, before she adds: 'I want to make this sort of music for the rest of my life." Something suggests she will do just that.

Question: Are you enjoying your time in Australia?

Foxes: I am loving it, I haven't got to see much of Australia which is gutting but I always love coming here. I would like to see more than the hotel and the venue though. I'd love to have a holiday here, that would be nice.

Foxes: I am loving it, it's good! Bastille are such great lads and it's amazing to hang out with them, it's incredible!


Question: Tell us about filming the Holding Onto Heaven video clip; it looks like so much fun!

Foxes: Yes, it was incredible; I always get heavily involved in videos to ensure it tells the story of the song. Holding Onto Heaven is a confusing concept to try and put across but as you can see there are two of me and I'm in multi-dimensional universes.

Foxes: Sometimes I start writing three different songs and after the first song I need something that is upbeat that allows me to have fun and dance to. Let Go For Tonight came from the idea of not worrying about things too much, the whole -don't sweat the small stuff' thing. It's really about living in the now. The idea for the video came when I was reading and 8 year old diary, the story was from my 8 year old mind which is quite funny!


Question: How does it feel to hear your songs played all over the airwaves?

Foxes: It's amazing! In the UK there were so many moments where I heard the tracks and I couldn't believe it. It's so nice to hear them on the radio. One person buying my music that's not my Mum is amazing (laughs)!

Foxes: After finishing this tour I'm going on tour with Pharrell for six weeks which will be really fun and then I'll be doing lots of festivals, in the UK. It's going to be a super busy Summer.

Foxes: There haven't been moments where I thought about walking away because I love what I do and really I'm living my dreams every day.

Foxes: I love both as different moments of them are amazing. Performing live is so magical and there is a feeling of euphoria that I haven't experience anywhere else as the crowd are singing your words. Creating music is something I've always done and loved doing so recording is like therapy. I love both, the same, really.

Foxes: When I was growing up, my Mum played great, strong, female musicians like Patti Smith and Björk – they were the soundtrack to my childhood which inspired me to write real, honest music. I've always written music, I think it came naturally, for me.

Foxes: I love Banks, I think Banks is incredible. There are some great UK musicians like Sam Smith and Clean Bandit too who I'm listening to.

Foxes: When I get up I normally have no idea what city, I am in (laughs). At the moment I often get on a plane (or drive) and go to another city, soundcheck, have some food and do some promo (sometimes at the same time) and then get on stage before starting all over again. Airport, venue, hotel. It's all amazing and very fun!

Foxes: All of it has been amazing; being on stage every day and hanging out with amazing people has been so incredible and fun.

Foxes: I love Sia, I think Sia is a great artist and I love how her career has panned out. I think she is incredible.