Leila By You Now Interview Leila couldn't be further from your typical indie artist. Hailing from Neverheardofit Pennsylvania, her sound and lyrics carry their humble roots. A little Jazz, a little soul, a hint of strange and three shots of romance will keep this spellbinding cocktail of uncanny ballads in your head forever. Having grown up playing piano, singing, and dancing in recitals and competitions she was exposed to the industry at an early age, setting the stage for this artistic endeavor. Her love for Chopin and Debussy heavily influences her songwriting, infusing her sound with a musical maturity and sophistication.

Primarily inspired by late romantic classical composers and vintage Italian film scores, Leila describes her sound as "Subtle Freak Hawaiian Prom." A syrupy vocal and hypnotic wave of guitars wash you away from wherever you're sitting and into a velvet armchair at a sparkling B-list dinner party.

All songs, artwork, and music videos are painstakingly created by the artist herself by way of a full time career in software engineering. Her sheer determination is the driving force behind her upcoming debut album Glass Highways. Produced with Tim Carr (The Americans, Fell Runner), the ten-track release is a breakup album exploring the stages of romantic loss. Beginning with doubt and moving all the way through to reflection. Leila confides, "I tried not to be too prescriptive in my lyrics, but rather acknowledge the varied and at times dissonant emotions we face amidst heartbreak."

Glass Highways is a vocal-heavy album, featuring bittersweet lyrics, inviting the listener to consider the dark and light of life in tandem, adding candor and humility to Leila's story. Thematically, the album is romantic and lush, consisting of long, dramatic songs oozing with cinematic flair. The songwriter reveals, "During production of my songs, I try to feel like I'm enveloped by them. I want them to wrap me in sound and feeling, as if pulling me into a daydream, or LeilaLand, for that matter."

Single "Missing You" describes a narrator aching with nostalgia musing over the next time she'll encounter her lost love. She imagines running into them in various scenarios, describing how they'll react with each other in this new and uncertain distance they've created. Then there is "By You Now", a two-phase epic of wistful confession. Leila expresses, "Despite how emphatically we attempt to distract ourselves, the reality of heartbreak inevitably sets in. That's the arc I was going for in 'By You Now' with a vibrant upbeat opening that ultimately leads to a somber and lonely ending".

Upon moving to LA, Leila joined the Angel City Chorale touring England and ultimately performing with the London Philharmonic and recording at Abbey Road Studios. While singing in this choir, she began writing and producing original songs, many of which are included in Glass Highways, slated for release in fall 2020.

Leila: Romantic indie soul with a hint of strange.


Question: Can you tell us about By You Now?

Leila: "By You Now" is a two part epic moving through the highs and lows of heartache. It starts as an upbeat dance party, motivated by nostalgia, mirroring the nights out we indulge in to forget a lost love. But when the party's over, it ultimately turns into a somber acknowledgement of loneliness and solitude which marks part II of this track.

Leila: There is no black and white to love and life, but rather all the bittersweet intricacies in between that make our memories rich and special.


Question: How has LA influenced your music?

Leila: LA has undoubtedly brought a vintage pop element to my sound. My producer Tim Carr is inspired by bands like the Beach Boys, and that influence is apparent in our production. 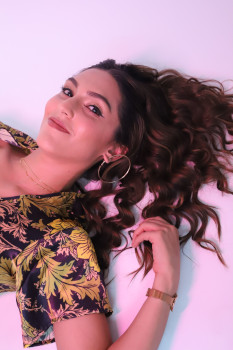 Leila: An attempt to be honest and say something meaningful with eloquence, and the lyrics of Leonard Cohen.

Leila: This is something I've wanted for myself from a young age and can't pin the inspiration on a single person or source.

Leila: Regularly! This project is extremely taxing to balance with a full-time engineering job. Despite that, these moments have further confirmed that I'm in it for the long run.

Leila: The songwriting and production process. Making and shaping the music is the most challenging and rewarding part of the process for me.

Leila: This single precedes the release of my debut album Glass Highways coming this fall! I will be releasing another single, a few more music videos, and holding a remix contest in that time as well.
I have also started writing a good bit of my next album and am ready to hit the ground running with new material as soon as Glass Highways is out to the world.