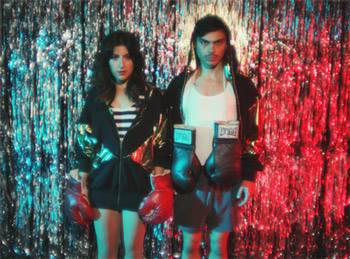 There are two ways to get what you want in life: you count on your luck and wish for the best, or you fight for what you want. This pair could have counted on their lucky star, the one that guided them to where they are today. But Nili and Ben decided to fight to achieve their dream. Two years after their magical and unexpected success, Lilly Wood and The Prick get back into the ring to conquer our hearts with their second album The Fight.

Their trajectory has been exemplary. Their paths crossed five years ago in Paris, in a bar, late at night. It's easy to guess what brought them together, apart from pure chance. Both in their early twenties, Nili and Ben were finding their way, floating between melancholy and lightheartedness and found music as something to hang on to. That same night, with her on the mic and him on the guitar, they spontaneously composed their first ballads made of a heady kind of folk blues, not knowing where it would lead them.

Their first songs already embodied the whole universe of Lilly Wood and The Prick; an unabashed, disabused, melancholy and playful kind of pop. Their songs quickly spread on the internet, circulated by a generation, their generation, who recognised itself in them. In 2009, Lilly Wood and The Prick where an internet hit, and thanks to their song -Down the Drain' with its fantastically quirky video and to their clever cover of Santigold's -L.E.S Artistes', the duo reached the status of young promising trendy band.

In 2010, the general public discovered Invincible Friends, their tenderly rebellious debut album in which these two self-taught musicians explored every sound permitted by their youthful curiosity: pop melodies mixed with electro arrangements, a bluesy voice transported by folk chords. This first album resonated as the call of a generation that finds its strength in disillusion.

The rest of their story is like a fairytale in which the public waved its magic wand to send Lilly Wood and The Prick to new heights: 2011 was a magical year that brought them a gold record, a sold-out tour (Olympia, Bataclan, Cigale…), the biggest festivals (Rock en Seine, Les Francofolies…) and a Victoire de la Musique as the new Revelation (voted by the public).

The story could have ended there, but the euphoria and the energy brought on by these successes soon got the duo composing again, as if to convey the story of the past three years. One thing is for sure, if the first album was the product of a spontaneous verve, this second record is that of a battle to succeed. They logically called it The Fight.

At first, they perceived this new album as a challenge, a test of their duality that they needed to isolate and find again, expose and transcend, to find a perfect balance. The duo has retained its instinctive quality and still composes with the same candidness, but each sound, each word is more carefully selected and applied. Lilly Wood and The Prick chose to evolve surrounded by their original team (Pierre Guimard and Pierrick Devin as producers), but left the DIY atmosphere behind to give place to a more produced and precise sound. The arsenal changed, like a beat box giving place to a drum set, creating a combative, fiercely passionate atmosphere. The lyrics dig deep to reveal another battle: adulthood; when your youth slips away, torn between the carefree past and the weight of the future; the youth that brought on so many heartaches, but that you're already starting to regret.

Song after song, the duo avidly explores new musical sceneries, never losing itself, never getting trapped: flying off into atmospheric ballads (-Briquet', -Into Trouble'), diving head first into a bath of electrifying pop songs (-Long Way Back', -California'), even daring an exotic escape (-Guys in Bands'), before entering nighttime with a disco hit (-Middle of the Night'). From Paris to Los Angeles, the adventure continues, shooting a double video, a powerful short-film revealing two catchy tunes and the general atmosphere of this new album. The Fight is an intrepid record that scatters the contagious energy of a duo that believes that dreams can come true. Lilly Wood and The Prick may have grown-up and wised-up, nothing seems to alter their unmistakable energy. It gets through to us and makes us want to join their cause.

Interview with Lilly Wood & The Prick

Question: What is the story behind the band's name?

Nili Hadida: Unfortunately there is not much of a story there, we started playing music for our friends and thought it was a funny name, we didn't think it would go anywhere, if we had known we probably would have gone for something less dramatic, but it's part of us now and we still think it's funny. 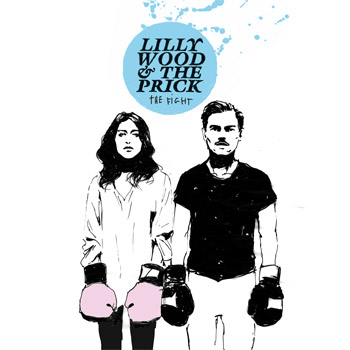 Question: Can you tell us how the band came about?

Nili Hadida: Ben and I had a couple of friends in common and one night we were at the same bar and decided to try writing a few songs together, the next day i went to his house, we didn't talk or anything, we wrote three songs in one hour and never stoped since.

Nili Hadida: Like any kid that has a band the first time we heard one of our songs on the radio we went completely crazy especially myself, but I think we are down to earth people and we know that things can change really fast in the music industry. We just try to make something that we like and that expresses how we feel and who we are, and if it ends up being played on the radio it's great but it's not what we aim for.


Question: Describe The Fight for us:

Nili Hadida: Ben and I are very sensitive people I think we are mostly fighting with our inner selves most of the time. And of course, sometimes with each other, having a band isn't always easy but it is the best experience!


Question: What are you looking forward to most about the upcoming, 2014, tour?

Nili Hadida: Touring Australia is an amazing opportunity for us and we are looking forward to it.

Nili Hadida: Yes. Everyday life. We are trying to deal with our upcoming adulthood, and where we stand, I think we are a very confused generation.


Question: How do you ensure you stand out as artists, with each individual track?

Nili Hadida: We don't. We never TRY TO do anything as I said above we really just make music in a very naive way, we are inspired by movies, photos, people, our lives and we try to make music like we would want to hear it. But we don't calculate things. Ever.


Question: What music/artists are you currently listening to?

Nili Hadida: James Blake, The Weeknd, Frank Ocean, Rihana, Half Moon Run, Odd Future, and a whole bunch of other stuff like Chopin or Debussy and Otis Reading...


Question: What have you learnt, in regards to your career, over the past years?

Nili Hadida: I've learnt that you are never done learning. Being a person means changing and evolving all the time.

Nili Hadida: Recording is great but a lot of pressure comes along with it as you have to settle and freeze on some idea of your music, and it's hard as there's not just one way to arrange a track. That's why live concerts are so important to us, it's the only time you can share your music in the purest way with your audience.

Nili Hadida: Half Moon Run, The Rapture, so many!!!