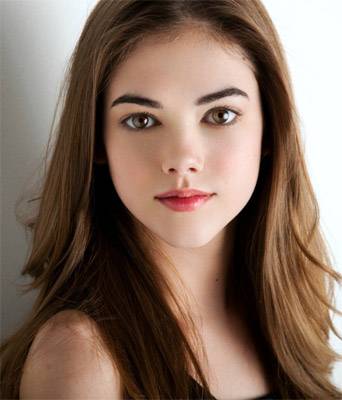 16 year old McKaley Miller is best known for her role on the popular dramedy 'Hart of Dixie.' Miller plays Rose Hattenbarger, a small town teenage blogger who quickly befriends the fast-talking New Yorker, Zoe Hart (Rachel Bilson). Due to her intellect, Rose considers herself an outsider among her peers and even her parents.

McKaley Miller's television credits include a recurring role on ABC's 'The Gates' and joined the Disney Channel award winning comedy 'Wizards of Waverly Place' for a multiple episode arc as Talia, the love interest for Max Russo.

Up next, McKaley Miller will share the big screen with Winona Rider, Michael Shannon (Boardwalk Empire), and James Franco in the true-crime thriller 'The Iceman.'

Besides acting, Miller is a competitive dancer, with more than six years of experience in jazz, hip hop, clogging, tap, lyrical and ballet.
McKaley splits her time between her native state of Texas and Los Angeles.

Question: Can you tell us about your character Rose Hattenbarger on the show Hart of Dixie?

McKaley Miller: I feel like Rose is a character that a lot of people can relate to. She's not super popular, she has boy troubles, and she's just a girl trying to find her way. One thing I really admire about her is that she is who she is. She's not afraid to be herself, and she doesn't care what other people think of her. Rose wants to get out of her small town of Bluebell, and she wants to live in the big city... so when Zoe comes along you can only imagine how excited Rose is.


Question: How are you similar to the character Rose Hattenbarger?

McKaley Miller: I am similar to Rose in the way that we're both outgoing, and also laid back. We both have our own sense of fashion; (If you notice, Rose always dresses different from all the other Bluebell natives). We also both love dance. Plus, we both wear glasses.

McKaley Miller: Working with Rachel is a blast. She is the ideal person you would want to lead your series. She cares about everyone, and makes sure everyone on set is happy. She makes the whole set environment relaxed and fun. She is such a professional, and always comes to work prepared. I love working with her!


Question: What inspired you to go into the acting industry?

McKaley Miller: I have been performing since I was little. I would constantly be putting on performances for my parents, and always making up characters. My grandma was a singer, and I would go on stage and perform with her on occasion... so I guess you could say that's what inspired me.


Question: Do you think your previous competitive dancing experience helps you act in from the cameras?

McKaley Miller: I definitely think it helps! I was a competitive dancer for 5+ years, so I think the experience of dancing in front of a big audience has helped me to no be scared when everybody's eyes are on me.


Question: Can you talk about your role on the upcoming film, The Iceman?

McKaley Miller: The Iceman is based on a true story about a man named Richard Kuklinski, who was a hit-man for the mafia. He led a double life where on one side he was this terrible hit-man, and on the other side he was a completely normal guy with a family who he loved very much. (His family had no idea about his job.) I play his oldest daughter Anabel who has a very special relationship with her father, and she loves him very much.


Question: How was it working with Winona Rider, Michael Shannon and James Franco?

McKaley Miller: I learned a lot by working with Michael Shannon. I really enjoyed watching him become this character, and watching how committed he was. He is one of the most talented actors I have ever worked with. Working with Winona was unbelievable as one of my favourite movies is "Edward Scissorhands", so when I found out she was playing my mum, I was very excited! She is so incredibly sweet, and was constantly by my side making sure I was alright. Not only is she a phenomenal actress, but she is the nicest person off camera. I had a great time filming with her, and bonding with her. I didn't get to actually work with James Franco because he finished before I started filming, but I heard he was awesome!

McKaley Miller: Honestly, I don't like watching myself on the big screen (laughing) it's so weird!


Question: What is your top pick-me-up trick?


Question: Where would we find you on a Sunday?

McKaley Miller: You would probably find me at home... I'm pretty boring!

McKaley Miller: I think the biggest challenge for me is hearing all the 'nos'. I'll audition for something that I LOVE, and then to hear that 'no' is hard. But, I believe that everything happens for a reason, so I don't ever get too upset over the 'nos'. I know that there is something just around the corner, and there's a reason for everything.

McKaley Miller: Usually I wake up about 7:30am, and get ready for school. My favourite class in school is Art, so I look forward to that. Then after school I'll go home and play games with my brother or do homework. This is my usual schedule, but sometimes I'm not at home to go to school, and I'll be in Los Angeles. In that case, I usually wake up, do some school, and then go to whatever audition or meeting I have that day. My schedule changes constantly.


Question: If you could collaborate, on screen, with another actor, who would it be?

McKaley Miller: Emma Stone or Reese Witherspoon; I love both these actresses so incredibly much! I admire their career, and the choices they've made along the ways.

McKaley Miller: 1) Do what you love, and get rid of negative energy.
2) Take risks.
3) Don't be afraid to be a little crazy.
4) Smile all the time.
5) Be thankful for the things you have.


60 Second Quiz
Full Name: McKaley Nicole Miller
Nickname(s) : Mac, Mickey
Star Sign: Taurus
Favorite Food: Pizza
Favorite Film: Coraline
Favorite Actor: Reese Witherspoon
Pet: 1 dog
Person You Would Most Like to Meet: The members of One Direction
Hobbies/Interests: Dance, acting, singing and art
First Job: Modeling for JCPenny
What Can You Never Leave Home Without: My phone!
What is the first thing you think of when you wake up in the morning: One Direction (Only because my friend bombards me with texts about them before school)!
Interview by Brooke Hunter