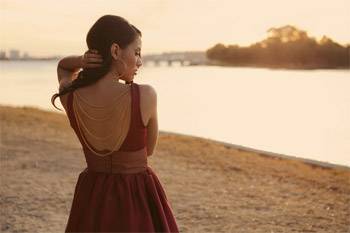 Socially conscious Perth soul songstress, Shameem has announced the release of her new single, Under One Sun (out Friday 12 December) and new album, The Second City set for release on January 16. Shameem will be celebrating the releases with a national tour kick starting in Perth at Subiaco Arts Centre on January 17, moving through to Melbourne on February 19, Canberra February 20, Sydney February 21, Newcastle February 22 & 23, Brisbane February 27, Byron Bay February 28 and finishing up in Adelaide on March 1.

With a strong soul influence and a unique jazz sensibility, the follow up to acclaimed first single, Beautiful Soul, Shameem's latest offering, Under One Sun was co-written with Grammy-winning UK-based producer, James Bryan (Nelly Furtardo, Olly Murs, James Morrison). Peddling an important message, Under One Sun is a catchy soul pop number that will leave you singing the heartfelt lyrics long after song's end. Touching on how humanity has a common root, the chorus sees Shameem sing, -everyone's dreaming under one sun'.

'We are all members of one human race, we all live on the same planet and receive life from the same sun in the sky," explains Shameem. 'I want people to think about why it is that we treat some people differently to others, when they are all equally our human brothers and sisters, no matter where they come from, what colour they are or what they believe."

After discovering the work of Western Australian artist, Renee Farrant, who makes paper cut art using plain white paper, Shameem says, 'I thought how cool would it would be to make a video where everything is made of paper?' So she floated the idea with director/ producer Jason Eshraghian (Passenger, Northlane), and he came up with the story of an artist who lives in a paper world, and this became the song's inimitable and clever film clip.

The Second City LP was co-produced with Rob Agostini (Rai Thistlethwaite, Tim & Jean) at Soundbaker Studios in Perth. Rich with soulful vocals and keys-driven works of art, the record offers insight in to Shameem's inspiring passion for life, positivity, spirituality and general desire to assist in the betterment of the world via song and goodwill, not dissimilar in sentiment and talent to global superstar, Alicia Keys. It touches on a number of thought-provoking themes over the generously loaded 15-tracks; the overcoming of prejudice, broken trust and forgiveness, thankfulness, and gratitude in the face of difficulties.

Excited about releasing her sophomore record, she jokes, 'I'm also feeling a mix of anticipation and impatience. I'm guessing that this is how a pregnant woman feels; I've been cooking this album up for so long and I just want to give birth to it already!"

Keen to hit the road to bring a new life and energy to her songs on stages around the country, Shameem beams, 'we stretch out the song arrangements and I like to let my band members improvise and re-interpret the songs. I love chatting to the audience, so I tell all the stories about what inspired me to write the songs and the meaning behind the lyrics."

Question: How would you describe The Second City?

Shameem: A diverse album with the sensibility of neo-soul tying it all together, but also exploring aspects of reggae, rock and Middle-Eastern music. Conscious lyrics and emotional stories, with an overall theme of gratitude for life.


Question: What was the main inspiration behind the track, Under One Sun?

Shameem: As a child I was taught that we are all members of one human family. In the Baha'i Writings it says that we are all made from the same dust, and that no one should exalt themselves over someone else. It also says that instead of loving our country, we should prefer to love our kind. I find it very interesting that scientists have recently concluded that all of humanity is genetically linked and that we are all descended from the same group of people who lived in Africa thousands of years ago. So from whatever angle you look at it, we are all one people.

Shameem: Yes, I write all of my own songs. Some songs are inspired by my personal experiences and stuff that I'm going through, some are inspired by social messages or ideas that I want to raise awareness or create a discussion about, and some are me expressing my more spiritual side and sharing spiritual ideas.

Shameem: Too many different artists to name! I listen to everything from classical music to old school rock to new school soul. Bach, Debussy, Joni Mitchell, Jeff Buckley, Michael Jackson and Emeli Sande are all on my playlist, to name but very few.


Question: What should we expect from the upcoming shows?

Shameem: My tour shows around the country will be our usual solid band show, with my 6-piece band pumping out our own brand of neo-soul and stretching out our song arrangements for some improvisation and spontaneity. Plus I always like to chat to the audience and share with them the stories behind my songs. My album launch show in Perth will be quite a particularly special gig, with some extra trimmings like guest artists and an art display.

Shameem: What do you mean by throwing in the towel? I would never throw in the towel on music; music is too deep in my soul for me to ever stop singing or playing or writing. But in terms of pursuing a career in recording and performing… It's a constant struggle and I'd be lying if I said that I've never felt like giving up. For every good piece of news that people hear about my career, there are 10 or 20 doors that close in my face. When you're an independent artist trying to make it in this shark tank industry, you have to develop a very thick skin!

Shameem: I love them both for their own reasons. Performing live is fun because you get to share and interact with the audience; recording is fun because it's ultimate creative time where you can craft a song or a sound exactly how you like it.

Shameem: Many artists have inspired me in terms of creating and performing music. But I'd have to say that my singing teacher in high school was the first person who made it seem like something that I could actually make a career from.

Shameem: Depends what day of the week it is. If it's a Monday – Wednesday, I'm teaching singing lessons. If it's a Thursday or Friday, I'm working from home promoting my music, applying for a grant, writing songs or planning an upcoming project, like a tour. If it's a weekend night, I'm probably gigging!

Shameem: When people come up to me after a show and say, 'I love your song, XYZ… when I heard it, it reminded me of this time in my life when blah blah blah happened, and it was so inspiring to hear you sing about it." That's the best!

Shameem: Every one of us can make a difference in the world. This world of ours needs a lots of healing, and we can all do our part to make the world a better place.