Jai announced to his fans via Twitter -Shy' would be released on December 12th along with four covers including his take on the current Ed Sheeran #1 ARIA single -Thinking Out Loud', as well as Sam Smith's -I'm Not The Only One' and -Tomorrow' originally by Olly Murs. Jai has also put a spin on the holiday favourite -White Christmas' which is sure to bring out the festive spirit!

Since releasing his iTunes #1 Get To Know You EP in March earlier this year and following on from his world first Vine app music video integration, Jai continues to set the internet alight and speak to his fans directly.

Jai most recently launched a YouTube charity campaign as an ambassador for the Sony Foundation. Through his YouTube clips he is building awareness with weekly sharable content and fan nominated challenges resulting in incremental donations to the Sony Foundation. His most recent challenge has accumulated over 100,000 views already with his first video involving Hamish & Andy, Natalie Bassingthwaighte, Marlisa, Karl Stefanovic and more! You can check it out here.

Proving to be a dynamite behind the mic Jai has been invited onto the red carpet yet again, this time by Twitter as their official ARIA -Tweejay' at this year's 28th annual ARIA awards connected by Telstra. Fans can get up close and personal with their favourite musicians through Twitter with the hashtag #jaiasks and can watch the action unfold across Jai and Twitter's socials, reaching over 6 million users worldwide.

Jennie Sager, Partnerships Manager – Music, Entertainment, Events at Twitter Australia commented "One of the great things about Twitter is that it lets our users get closer than ever before to their favourite stars. With Jai as our first ever "Tweejay" on the ARIAs red carpet, Twitter users will get an access all areas view up close and personal with all the action as it happens. We can't wait to see what he has in store!"

Jai's most recent video for -Get To Know You' has accumulated over 6.5 million views since its release in April making it one of the highest viewed videos for an Aussie artist. 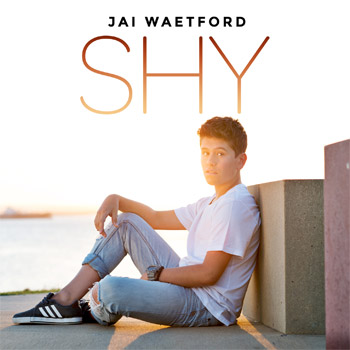 Question: How would you describe Shy?

Jai Waetford: It's a song about a girl making a guy crumble under her beauty and not being able to approach her. It's a chilled out vibe, just me and my guitar.


Question: What was the main motivation behind the track, Shy?

Jai Waetford: I was in the studio in Los Angeles with a couple of writers/producers and started playing around on the guitar with some chords, we all liked them and it just started from there.


Question: What can you tell us about the upcoming album release?

Jai Waetford: It comes out on Friday 16th January, it is one original song -Shy' and then a few covers of some great songs that I like.


Question: What was the best part about creating this album?

Jai Waetford: Just being in the studio again, I love recording music, my trip to LA was great and I met some amazing writers and producers.


Question: How did it feel to hear your songs played all over the airwaves?

Jai Waetford: I haven't heard -Shy' on the radio yet, but in the past when I have heard -Get To Know You', it's a strange feeling at first, a bit surreal, like 'Is that really me?" I really hope to hear more and more of my songs played on the radio.


Question: What's next? A Tour?

Jai Waetford: I want to get busy, busy writing an album, and then hopefully tour that album towards the end of this year.

Jai Waetford: Definitely Live, there is nothing better than performing for a crowd even if its 50 people or 5000 people, I just love being on the stage.

Jai Waetford: Wake Up, check social media and update my status, go to the studio do some recording or filming, some Playstation or X-Box and then bed.

Jai Waetford: I would love to work with Bruno Mars, Usher, Chris Brown.