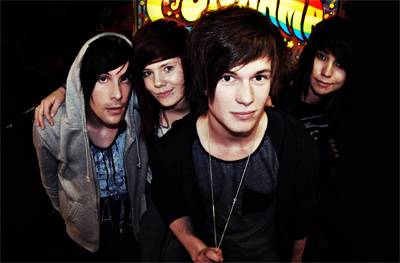 Sydney's most exuberant power-pop dance band The Never Ever are back for one special Sydney show at The Lair (Metro Theatre) on Saturday November 5 with special guests Gold Coast (QLD) rockers Nine Sons of Dan and The Monster Goes Rawrr!

The Never Ever has been busy recording their new EP "Breathe", a long awaited and much anticipated recording for their fans who have been waiting for this for some time. The Never Ever are delighted to be performing the songs from "Breathe" which is sure to incite a real buzz for their fans. They want the show to be a special experience and can't wait to meet up with their enthusiastic and supportive fans. The show is set to be like a big party, packing lots of fun and dancing into their performance.

Having been together for almost two years, The Never Ever have already achieved some noteworthy milestones such as supporting international bands Ivoryline and The Wonder Years, a clothing endorsement with urban style retail clothing specialists, Factorie and signing a publishing deal with Centrifuge Music Publishing Company.

The band have also enjoyed success with their 2010 debut EP "Dancefloors and Dinosaurs" and more recently with their latest single "Hey KT" which received national radio airplay on commercial radio stations including B105, SA FM and Triple M and the accompanying music video having been featured on Channel 10s Landed Music programme, Stay Tuned ABC 3 and Channel 7s Saturday Disney show.

Special guests are Gold Coast rockers Nine Sons Of Dan. Since releasing their debut EP in 2010, Nine Sons Of Dan have played a plethora of shows all over the country, impressing fans and critics alike at the Gold Coast Big Day Out in January and continuing to develop a reputation as a must-see live band with an electric presence on stage. The band's current single 'She's So Fine' features the work of Paramore guitarist, Justin York and the accompanying video clip stars the very beautiful Miss Universe Australia, Jesinta Campbell.

Having formed in mid-2009, The Monster Goes Rawrr has already made waves in the local music scene, supporting US electro heavyweights 3OH!3, UK rockers You Me At Six and Kids In Glass Houses, Texan popster The Secret Handshake and Aussie ex-pats Closure In Moscow. With a brand new EP on the horizon, The Monster Goes Rawrr are destined to propel themselves further up the ranks of the local music scene with their powerpop, rock, dance, trance and electronica and an energetic and professional stage show.

The Never Ever Tour with Nine Sons of Dan and The Monster Goes Rawrr:
Saturday 5th of November at The Lair, Metro Theatre, Sydney
Tickets on sale now from www.metrotheatre.com.au or (02) 9550 3666.