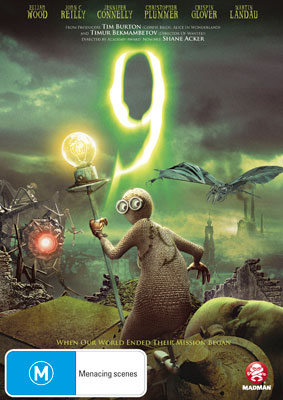 When our world ended, their mission began

From visionary filmmakers Tim Burton (The Nightmare Before Christmas) and Timur Bekmambetov (Wanted) and Academy Award®-nominated director Shane Acker comes this visually stunning and original epic adventure. In the final days of humanity, a dedicated scientist gives the spark of life to nine of his creations. The world has turned into an unrecognisable landscape of machines and spare parts, but this group of nine finds that if they band together, their small community might just be able to change the course of history.

Special Features:
Feature commentary
9 - The Long and the Short of It featurette
The Look of 9 featurette
Acting Out featurette
9 - the original short (with commentary)
Deleted scenes