Born and raised in Puerto Rico, Alondra Delgado got her start in the entertainment industry at an early age. Ever since she was little, Delgado has fond memories of watching telenovelas and telling her mom that she wanted to star in them. At the age of four, she started acting in a local theatre company and, shortly after, began working with a talent agency. By age seven, she already had her first lead role in a feature film called Zompi, which was directed by Ari Maniel Cruz and shown on Channel 6 in Puerto Rico.

It wasn't long before her career began to take off. She portrayed Elenitam, in the TV movie Angeles Perdidos. Soon after, she landed a role in the film Ángel, by the award-winning Puerto Rican director Jacobo Morales. She also appeared in the short films Suesville and Mala. From then on, Delgado began to make her mark in Puerto Rico as an up-and-coming actress. After high school, in an effort to hone her craft, Delgado made the decision to move to Los Angeles to attend college and pursue her acting career.

In addition to her acting accomplishments, Delgado has ventured behind the camera into the world of writing and producing. Her film A Will to Love follows two groups of three unwitting young men and women who are called together for the reading of the last will and testament of their father, only to discover that he had two completely separate families. Delgado also stars in the role of Veronica. She also wrote and produced Bygone, a short that follows her character Harper, who wakes up after a night of drinking with blood on her hands, her fiance missing, and the task of figuring out what happened the night before her wedding. Her performance earned Delgado Best Actress honors at the Austin Micro Short Film Festival.

Her American television debut came when she joined the cast of the hit FX series Mayans M.C. She plays the role of Monica, a young rebel with a checkered past who has been forced to be tough and endure adult situations that teens her age aren't typically faced with. She also guest-starred as Rosario on the STARZ series Vida.

Delgado landed her big break when she was cast in Season 3 of the popular CW series All American as Vanessa Montes, the daughter of the Beverly Hills High football coach. Her character reveals secrets when it is discovered that she spent an intimate summer with Asher, played by Cody Christian. Despite the drama she brings, Vanessa has quickly become a fan-favorite on the show. She is also set to return to the world of film as lead character Carla in the action indie Safe House as well as Aimee, a poignant story about human trafficking.

In her spare time, Delgado loves to write poetry and music, journal, and dance around her apartment. She also enjoys traveling around the United States and spending time with her pets, including her new French Bulldog puppy Cash. She currently resides in Los Angeles.

Question: Can you tell us about your role as Vanessa Montes?

Alondra Delgado: Vanessa Montes is such an awesome girl. She is confident, bold, and very upfront. She sees things in people that maybe they haven't realized in themselves. She just wants to have a fun time in high school, but being the new kid in school brings drama and problems with it.

Alondra Delgado: I think it is how bold she is. She is not afraid to speak her mind and I think I admire that in her a lot. 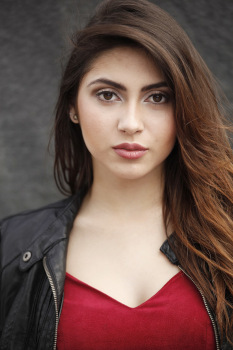 Question: Without giving too much away, what's your favourite part of All American?

Alondra Delgado: I love the show! I've always been a fan of it. So being able to interact with my cast members and the fans is a great and beautiful experience that is teaching me a lot and helping me grow as an actress.


Question: Who's the funniest person in the cast in real life?

Alondra Delgado: They are all pretty funny and so much fun to hang out with. I think Hunter (JJ) is very funny.

Alondra Delgado: My first performance was kind of scary. I was very nervous and cold and because it was out on the football field. I felt a lot of pressure, but after the first take I let loose and had fun.

Alondra Delgado: It's a lot of fun. I get to wear cute outfits, have my hair and makeup done by a great team, and then we get to have fun on set and talk and joke around between takes. During the downtime, I write in my trailer or sometimes we take short naps.

Alondra Delgado: I would love to work with Steven Spielberg and Meryl Streep.


Question: How do you fill your days when you're not on set?

Alondra Delgado: I like to write a lot. I also play with my new puppy and go on walks with music on.

Alondra Delgado: I have an upcoming feature film called "The Safe House" and hopefully I can book a series regular role soon. I would love to do that next!