Barbie lets you in on a secret™

Get ready for Barbie™ A Fairy Secret, an amazing new adventure with Barbie™ where she discovers there are fairies living secretly all around us! When Ken™ is suddenly whisked away by a group of fairies, Barbie's two fashion stylist friends reveal they are actually fairies and that Ken™ has been taken to a magical secret fairy world not far away.

Barbie™ and her rival Raquelle take off with the fairy friends on an action-packed journey to bring him back. Along the way they must stick together and learn that the real magic lies not just in the fairy world itself, but also in the power of friendship.

Special Features:
· 'Can you keep a secret?' Music Video
· Outtakes
· And more!

Honest, independent, fashion-forward, smart, and fun. Barbie is a leader who is very grounded amidst her over-the-top amazing life. Her friendships and her sense of right and wrong are really important to her - as is her sense of style! She's quick-witted and playful, willing to be self-deprecating, and usually keeps a cool head in crisis, but can explode when she's pushed too far.

Think Justin Timberlake - he's super cool and super hip, but also can make fun of himself and has a keen sense of humour. An amazing soccer player whose skill on the field translates to real confidence off the field. He's crazy in love with Barbie, and also has independent friendships with many other people, including Raquelle.

It's all about Raquelle. She's driven and needs to be the center of attention at all times. It's not enough that she's a huge star... she has to be a huger star than anyone else around. And that never happens when Barbie is in the room. She's jealous and catty and will always speak her mind... but when she's on your side, she's fiercely loyal and will fight to the death for you.

Carrie is more kinetic and daffy. She'll put two and two together and make twenty-two: not wrong, just different. Her mind races a million miles an hour and in all kinds of wild directions. She's always positive, and rarely without a smile on her face and a ready laugh in her voice.

Celebrity reporter ala "Access Hollywood" type show, hobnobs with the celebs in a respectful, chummy way, and doing this enough that she's a bit of a name in her own right.

Beautiful, haughty, and shallow. She thinks only of herself, will do what it takes to get what she wants, and tries to avoid all personal responsibility. She's in love with Zane and acts very coquettish around him.

Regal and strong, she's normally just and fair. She is a passion fairy. When under the love potion (as she is through most of the movie), she's convinced she's in love with Ken, and will let nothing stand in the way of them being married.

Fiery Latin Lover. Can be VERY over the top because his emotions run that deep, but to him it's not over the top at all. He believes everything he does wholeheartedly. He is deeply in love with Graciella, and will do anything to hold onto her love.

Famous fashion editor and fairy. Very proper and refined, high status. Barbie first met her in A Fashion Fairytale, but didn't know that she was also a fairy. 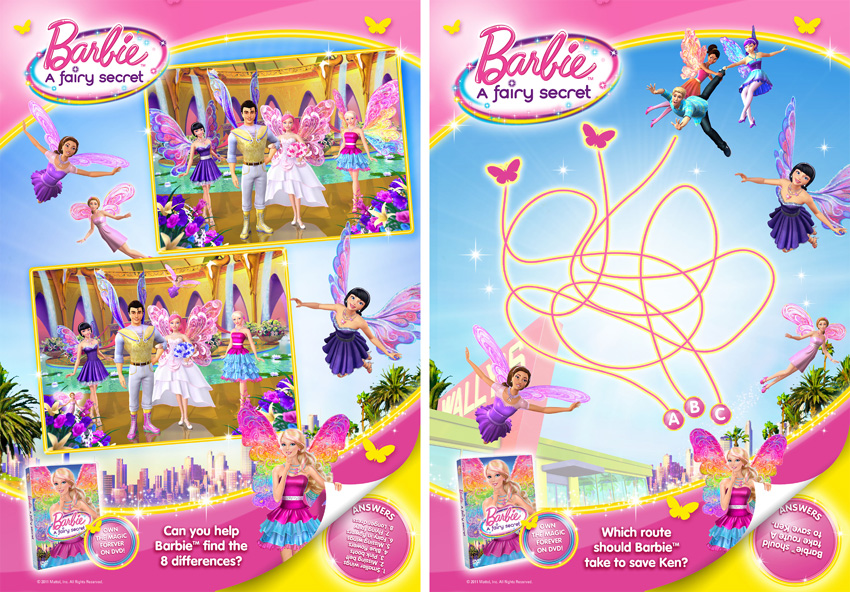