Miley Ray Cyrus (born Destiny Hope Cyrus; November 23, 1992) is an American singer, songwriter, and actress. After playing minor roles in the television series Doc and the film Big Fish in her childhood, she became a teen idol starring as the character Miley Stewart on the Disney Channel television series Hannah Montana in 2006. Her father Billy Ray Cyrus also starred on the series, which aired for four seasons until 2011.

Cyrus has earned three number-one albums on the US Billboard 200 with Meet Miley Cyrus (2007), Breakout (2008), and Bangerz (2013). Her releases The Time of Our Lives (2009), Can't Be Tamed (2010), and Younger Now (2017) debuted in the top-five in the United States, while her album Miley Cyrus & Her Dead Petz (2015) was released for free online streaming on SoundCloud. Further, Cyrus has attained an additional two number-one and three top-ten soundtracks credited as Hannah Montana. She has also earned nine top-ten entries on the US Billboard Hot 100: "See You Again", "7 Things", "The Climb", "He Could Be the One" (as Hannah Montana), "Party in the U.S.A.", "Can't Be Tamed", "We Can't Stop", "Malibu" and the chart-topping "Wrecking Ball".

Cyrus launched her film career as a voice actress in the animated film Bolt (2008), and later starred in the feature films Hannah Montana: The Movie (2009) and the coming-of-age film The Last Song (2010). Of her television credits, she was the host of the 2015 MTV Video Music Awards and has hosted Saturday Night Live three times since her first appearance in 2011. Cyrus has also been featured as a coach on the singing competition television series The Voice, and has appeared in two seasons of the show since her debut in 2016. Cyrus' image has been the subject of significant media commentary and public controversy, including the transition from her wholesome image to a highly-sexual persona in the early 2010s. She has earned numerous awards and nominations, was recognized as "Artist of the Year" by MTV in 2013, and was included on the Time 100 list of the most influential people in 2008 and 2014. Cyrus is an outspoken animal rights advocate and adopted a vegan lifestyle in 2013. 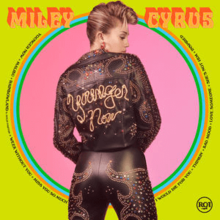 Younger Now is the sixth studio album by American singer Miley Cyrus. It was released on September 29, 2017, by RCA Records. Cyrus began planning a commercial follow-up record to her fourth album Bangerz while simultaneously making her experimental fifth album Miley Cyrus & Her Dead Petz in 2015, although later became influenced by her reconciliation with fiancÃ© Liam Hemsworth in 2016. Younger Now was written and produced by Cyrus and Oren Yoel, with whom she had collaborated on her previous two full-lengths. Not concerning herself with radio airplay, their efforts resulted in an "honest" final product that sees Cyrus "leaning into her roots." It features guest vocals from singer Dolly Parton, Cyrusâ godmother.

Miley Cyrus And Her Dead Petz 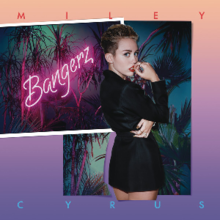 Bangerz is the fourth studio album by American singer Miley Cyrus. It was released on October 4, 2013, by RCA Records. Opting to re-establish her music career instead of focusing on her film career as originally planned, Cyrus began planning the project in 2012. Work continued into 2013, at which time she left her previous label Hollywood Records and subsequently joined RCA Records. Described by Cyrus as "dirty south hip-hop", Bangerz represents a musical departure from her earlier work, which she has grown to feel "disconnected" from. As executive producers, Cyrus and Mike Will Made It collaborated with hip hop producers including Cirkut, Pharrell Williams, and will.i.am to achieve Cyrus' desired new sound. Their efforts resulted in a primarily pop record, with lyrical themes that revolve largely around romance. It features guest vocals from several new partners, including pop singer Britney Spears and rappers French Montana, Future, Ludacris, and Nelly.

Can't Be Tamed is the third studio album by American singer Miley Cyrus. It was released on June 18, 2010, by Hollywood Records; it would become her final album with the label after signing with RCA Records in 2013. Cyrus wrote the project in 2009, while travelling internationally for her Wonder World Tour, and recorded it in 2010. Described by Cyrus as a "good [record] to blast in your car", Can't Be Tamed represents a musical departure from her earlier work, which she had grown to feel uninspired by. As executive producers, Tish Cyrus and Jason Morey enlisted partners including Devrim Karaoglu, Marek Pompetzki, Rock Mafia, and John Shanks to achieve Cyrus' desired new sound. Their efforts resulted in a primarily dance-pop record, which Cyrus' record label acknowledged differed from the original plans for the project. Its lyrical themes revolve largely around breaking free of constraints and expectations, which are largely mentioned in the context of romantic relationships. 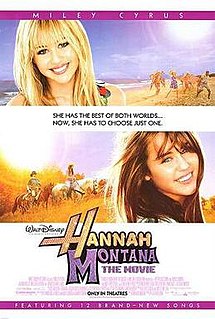 The Time Of Our Lives

The Time Of Our Lives Tracks 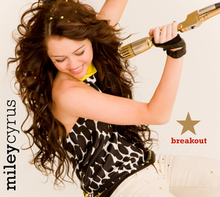 Breakout is the second studio album by American recording artist Miley Cyrus, released on July 22, 2008 by Hollywood Records. It is her first record that is not affiliated with the television series Hannah Montana, in which Cyrus portrays the titular character Hannah Montana. She co-wrote eight of its thirteen tracks, several of which with the assistance of Antonina Armato and Tim James. The majority of the record was composed as she traveled during her headlining Best of Both Worlds Tour (2007–08). Overall, Breakout is dominant on pop rock but explores a variety of other musical genres. Lyrical themes addressed in the album relate to breakups and coming of age.