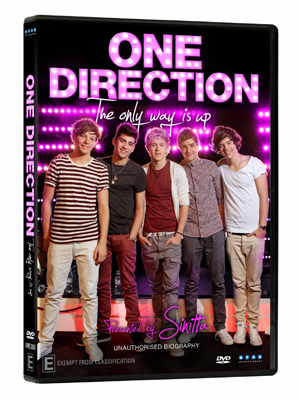 Harry, Liam, Zayn, Niall & Louis have proven they're more than a manufactured boy band by becoming global superstars almost overnight. Presented by X Factor's Sinitta, this program unleashes all the highs of the band's turbo-charged fame. From five individual hopeful singers taking part in Simon Cowell's British X Factor. the boys of One Direction have defied the odds, and their critics, by becoming the hottest British boy band in the world.

With A-List interviews from Piers Morgan, Zac Efron, Katherine Jenkins and some members of the cast of Glee and many others, we explore what makes these boys a chart topping success. Smashing worldwide charts with their debut No 1 single and album, One Direction have it all: great voices, charm and good looks. proving the only way is UP for One Direction.