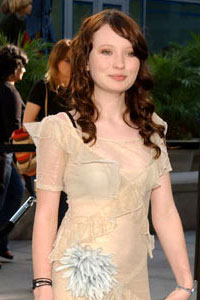 AUSSIE BROWNING TAKES ON A CLASSIC CHARACTER BUT IS NOT HOLLYWOOD BOUND.

At a mere 16, Australian actress Emily Browning is beginning to make quite a name for herself. Remembered for her her ghostly performance in Ghost Ship, Browning has appeared in the Australian films Ned Kelly and The Man who Sued God, as well as the horror flick Darkness Falls. Hailing from Melbourne, Browning says she has no intention to call LA home, but it'searly days yet. Browning arrived in a Beverly Hills hotel to promote Lemony Snicket's A Series of Unfortunate Events, in which she shines as inventor Violet Baudelaire who, along with her brother and baby sister, are constantly being threatened by the villainous Count Olaf [Jim Carrey]. Turning up with a small posse to equal that of major stars, Browning talked to PAUL FISCHER.

Paul Fischer: How did Lemony Snicket's A Series of Unfortunate Events come your way and were you a fan or familiar with the books?

Emily: I read the first script and then after I read that, I read the book and I fell in love with them but the original script was very different tothe script that was actually used for the film. When I first read the script it was like, "hmm", I don't know because it was kinda like a musical to begin with lots of singing, and I would have had to sing in it. I was like, yeah, I don't think I really want to do this. But then I read the books and I was like, OK, these are fantastic.

Paul Fischer: Were you in Australia at the time or were you living here?

Emily: No, I still live in Melbourne

Paul Fischer: So they had all these songs written and then just decided to drop them?

Emily: Yeah, I guess so. I didn't, they had a different director at the time and they still said oh, this still might not be happening. They were unsure, yes, I put an audition on tape for the first director, Barry Sonenfeld and then I didn't hear anything back for a while and about four months later I heard that Brad was directing and that he wanted me to fly here and do an audition. It wasn't really an audition. I just had a meeting with him for a couple of hours and then I got the part two weeks later.

Paul Fischer: How did you manage that whole experience, getting the part?

Emily: Really weird especially because they called up and said, OK, Brad's doing it, Jim Carrey's doing it, he's a little bit interested and the next day they called and said OK, he wants you on the plane tomorrow so I was like, I don't know. Nothing happened for ages and then it all happened really, really fast so it was very scary.

Paul Fischer: How into gadgets are you or did you become more so because of the film?

Emily: I'm not very good with gadgets. I find it difficult to put the DVD player on sometimes, or a computer. I'm a lot more into reading. It was funny because I read a lot and Liam is better with the technology sort of stuff. Like we live next door to each other and if I couldn't figure out the video player, how to record something, I'd ask him to come over so it was like the other way around.

Paul Fischer: Could you draw any parallels between yourself and this character, in her strength, her resolve?

Emily: I don't think, if I was in her situation, I could keep together aswell as she did. I mean obviously she's doing it for her siblings and I have two younger brothers so I guess I would have to figure out a way but I don't think could put on such a brave front like she does.

Paul Fischer: People like to compare these books with the Harry Potter books.What similarities and differences do you see?

Emily: The similarities are that there are three kids in both books and it really ends there. I mean, I really love the Harry Potter books but in those, the kids use magic and have these powers as well as have a few adults who can help them out, whereas these kids are alone, and there's no-one they can turn to. Every single adult there is against them, or not listening to them. They're kind of more real in that their powers are only the ir intelligence and what they can do. Paul Fischer: How would you respond to the criticism that some people will make that the movie is too dark for kids?

Emily: I loved the fact that it's a dark film but I definitely don't think it's too dark for kids. Dark in the way that it looks, yes because the way it's designed, it's very gothic and visually it's really stunning. I think it's amazing, but scary for kids? I really don't think so. The books in away are a lot darker than the film is and kids absolutely love the books. Obviously the books are really popular and I just think when they see thefilm, they're not going to be scared but they're going to feel for the kids in the movie.

Paul Fischer: Is there any chance you'll do a sequel?

Emily: We have no idea yet because it might be kind of hard because unlike Harry Potter, in this, they're meant to stay 14, 12 and 1 for the whole 10,11, I think they're planning on having 13 books so it might be hard to do because by the time they get around to writing a sequel, I might be like 17or something.

Paul Fischer: Why did you want to become an actress?

Emily: Well, I never did until I actually did my first job. I never thought about it. I wanted to be a fashion designer when I was a little kid and then when I was eight, I did a school play just because everyone did the school play at my school. My friend's dad came up to me and said, "I know this casting agent and I want to know if you would like to do a tele-movie with Judy Davis." I don't know who Judy Davis is, but sure.

Emily: Yeah, well I was eight, so. And then I did it and I got the part and I really enjoyed it. So after that, I wanted to get going.

Paul Fischer: Have you ever felt that adults are not listening to you as in this movie?

Emily: Oh yeah, sometimes definitely. More when I was a little kid, it would get frustrating but now I probably realise that was for the right reasons. When I wanted to do things and be more independent as a little kid and my parents wouldn't listen, I understand that they were probably in the right there. But when teachers treat you like you're more stupid than you actually are, which is annoying how they talk down to you a bit, that would be what frustrates me the most.

Paul Fischer: Do you still live in Australia?

Paul Fischer: Have you decided to move here or are you thinking about moving here?

Paul Fischer: Even if this movie makes a billion dollars and they offer you lotsof money to live here?

Paul Fischer: Why is it so important that you retain your Australian roots?

Emily: Because I was brought up there and my whole family's there, all my friends are there. I don't think I could move away from them for more than eight months. That's how long this movie took and it was hard. Anyway, when I'm older, I definitely want to travel, I want to go everywhere, but I think I'll wait.

Paul Fischer: How exciting is it?

Emily: My friends think it's cool but they're not constantly asking questions, that's not what they focus on about me. They're not my friends because of that, which I'm really lucky with. There's a lot of kids at school who bug me about it and some people really don't like me because of it and some people want to be my friend because of it but I know who my real friends are and they think it's cool. They're sort of more teasing when they see a billboard up, a billboard of the movie. They just kind of laugh. It really doesn't matter much to them.

Paul Fischer: Do you have any stories of a relative that you've had to spend time with?

Paul Fischer: Was the decision made from the outset to give you an American accent because there's no specific time or place for this film, and did you at anytime want to do it with your own accent or an English accent?

Emily: When I first read it, when I did the first audition, I just assumed it was an English accent. To me, it sort of has a kind of Dickensian feel to it. I just did an English accent and just assumed that's how it went. I guess because everyone was cast over here, well there were a lot of English people in the film, all the kids were cast over here except me so I think it is a lot easier for an Australian to do an American accent than vice versa, Australian's a pretty hard accent to do. I don't know why.

Paul Fischer: What about working with Jim Carrey?

Emily: That was pretty cool, pretty amazing, in that the first big thing I'm doing is with Jim Carrey, but it was very nuts sometimes because he does a lot of improvisation and it's hard to, when you don't know what to expect, it's really difficult not to keep a straight face because he does so much different wild stuff that's always funny so it's really difficult to be scared of this character while you think he's hilarious.

Paul Fischer: And you guys, the kids, you always stay on your lines even though hecan go off in any direction. Do you remember any particular time when youcracked up?

Emily: No, no, everything. Seriously, every single scene there was at least one take and one shot where we were just.

Paul Fischer: Will it be on the DVD?

Emily: I'm sure it will. I mean, I don't know how much they'd use but there could be like seven hours of stuff where we were just cracking up.Paul Fischer: What grade are you at school at the moment?

Paul Fischer: And do you plan to continue acting beyond high school? Are you pretty sure that's what you want to do?

Emily: I don't really know yet. I'm doing psychology at the moment and I'm interested in that.

Paul Fischer: When are you going back to Australia?

Paul Fischer: And do you have any actual plans beyond this?

Emily: Not yet, just school for the next two years. I'm sure I'll work a bit. I'm sure there are a couple of things. I'd really like to work in Australia because I haven't worked there for about two years but there's nothing definite.

Paul Fischer: Premier presumably for this, here, right? Any particular actor or movie star that you have a burning desire to meet at that event.

Emily: No, not really. I don't know. I might have, before this, said Meryl Streep.

Paul Fischer: Not Brad Pitt or Johnny Depp or any of those people?

Emily: I'm not a big fan or anyone in particular. I don't get star struck. Sorry if that's boring.