Gus & Jim are a two piece indie-rock band originally formed in Canberra after meeting in 2007. Remaining close friends for 13 years, Gus & Jim first produced music together in 2012, having since gained international attention with their hit song "Boyhood" in 2016, garnering a slew of playlists and over 100k spins. Following on from the release of "All They'll See" and "Emua", the duo are about to release the final track of their new EP Out Of Harbour with "Lovely Lady" out November 27.

Influenced by a diverse range of artists, the new EP takes Gus & Jim in a new direction from earlier more melancholic music, attempting to bring focus to the beauty that can be found in common and simple experiences, like sitting on a doorstep in the light of a setting sun or finding a special connection with new friends. This friendship allows the recording process to happen organically which is aided by the fact Gus records and produces all of their music from his own bedroom studio. Because of how far apart the boys live, whenever Jim can make it up to Brisbane it's for a few days at a time. This leaves plenty of room for writing, recording, relaxing and perhaps enjoying an evening brew or two.

Feeling as though they've matured in many ways since they began writing music together, Gus & Jim hope for this enhanced sense of capability and responsibility to connect fans with the new content they've produced for the EP. Recorded while Gus was living in Brisbane while completing his studies to become a doctor, and Jim living in regional New South Wales working as an ambulance paramedic, the duo explain "The recording and production process for Gus and Jim's new EP was at times an emotional one. While recording the final track, "Lovely Lady", Jim was experiencing some pretty severe heartache, and was actually crying during some of the final vocal takes. He now likes the raw emotion this brings out in the track." This similar raw and honest emotion can be heard throughout Out Of Harbour.

Gus & Jim: I think indie-rock is probably the closest genre to describing our sound, with a hint of electronica also flowing in through Gus's capable hands.


Question: Can you tell us about your EP Out Of Harbour?

Gus & Jim: Out Of Harbour has been a work in progress for close to two years now. The tracking was initially done in 2018 at Gus's house in Brisbane, however it took up until now to finally get all of the tracks completed on the production end. Regardless we are stoked on the final result!

Gus & Jim: A difficult break-up for Jim was the unfortunate catalyst for this piece of music. While difficult at the time, we are both super grateful for the raw emotion that it allowed us to instill into the track. 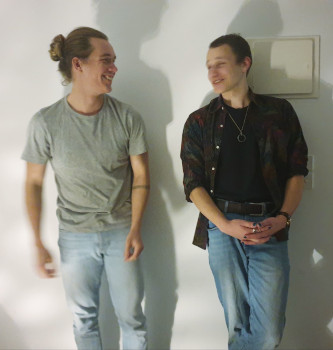 Gus & Jim: I guess one of our major goals is to bring focus to the beauty that can be found in common and simple experiences, like sitting on a doorstep in the light of a setting sun, or finding a special connection with new friends.


Question: How do you guys make music work while living so far apart?

Gus & Jim: The modern world is a beautiful beast and luckily enough it allows fairly seamless production over large distances! We generally have no problems at all working through ideas together by distance, although a beer in person always helps to get the creative juices flowing!

Gus & Jim: We have definitely loved our time performing live, however unfortunately it has now been some time since we did so. We are absolutely looking forward to getting back on stage as nothing quite beats the feeling of playing to our amazing fans!

Gus & Jim: For me (Gus) that would have to be the Queen. I think that seeing her face during one of our shows would be a priceless mix of confusion and joy.


Question: How did you two meet and when did you start making music together?

Gus & Jim: We managed to put up with each other throughout high school where we initially met, however it wasn't until we were completing our university studies that we began jamming together on a Friday night. The project bloomed out from there!

Gus & Jim: Fame and power. No just joking! I remember the first time we ever jammed out our track boyhood and that was such a special moment in time to be a part of. Ever since then we have been chasing those moments and we hope to one day take them to even bigger audiences all around the word.

Gus & Jim: We both love the musical complexity that Rufus Du Sol bring to their music - they are all geniuses and so our playlists are packed with their tracks! Ziggy Alberts, Tash Sultana, and Ocean Alley have been recent favourites that have also influenced some of our tracks.

Gus & Jim: We are both huge fans of Bon Iver and find a lot of inspiration in his music. A team up there would be out of this world and we think that the collaboration would work well given the similarities between our styles.

Gus & Jim: Creating tracks that we both vibe with has been one of our biggest challenges. We both have quite different styles of composition, and so it is often difficult to bring these together. When we do manage though we hope that it brings something special to your ears!

Gus & Jim: We both have full-time jobs, so we generally have to work music in around work. We'll often sit down on a weekend when we both have time off and build our songs out from there over a zoom beer.

Gus & Jim: Onwards and upwards as always! Thanks for taking the time team 🙂 Gus & Jim xx