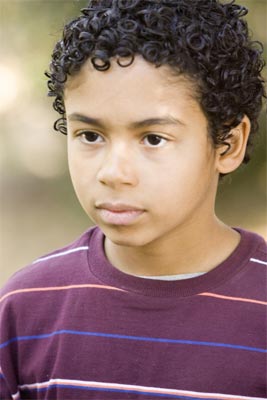 How did you get the part of Micah in Heroes?

Noah Gray Cabey: It was pretty much like everything else except I was really, really lucky. I was doing Ghost Whisperer when I had to do the first audition for Heroes. I was supposed to be changing for another scene on Ghost Whisperer and it just so happened that the auditions for Heroes was on that same lot so that was really lucky. And then a very nice Assistant Director decided to take us over really quickly to that audition centre. We were about the last people there - no, we WERE the last people there. And I auditioned and then went back to Ghost Whisperer after that I got called back and did some more auditions and I got the part. Then the show got picked up. So there was a whole lot of luck right there.


Because Heroes is such a huge success do you get recognised wherever you go?


How would you describe the boy that you play in Heroes?

Noah Gray Cabey: He is definitely super complex and I think that Micah is very deep. What makes him really special is that he observes everything, which makes him a wise character. That is one of Micah's great attributes. So he is a really awesome character to play.


What is it like with the actress Ali Larter who plays your mom in Heroes?

Noah Gray Cabey: She definitely is a terrific actress. And she is so nice, in fact I had to do a crying scene, which was really hard because I have never had to do one of those before. She helped me out a lot with that. She was actually able to help me out enough so that I could finally do it. I think I did it on the last take. I definitely do not think that I would have been able to do that without her. She is really nice and super helpful.


In Heroes you must find that with each episode you are learning more about acting?

Noah Gray Cabey: Yeah, like acting not just with your face but with body language or not acting so low-key but giving a little bit more, even though it may seem to me like I am over acting but on camera it shows up that I am not. These are different things that I have to keep on pushing myself with.


At school do the kids want to ask you about the show and playing the piano?

Noah Gray Cabey: I do get that question a lot and I say that it is super fun. It has been a great experience. I have been playing the piano three years longer than I have been acting so I am used to that but at the same time it never gets old. Sometimes I do get very rusty but playing piano is so much fun and it is one way to express yourself and have a blast. Acting is also fun, it is challenging and that's what I like about it, but it is also a blast and hanging out with the people on set is so much fun.


How do you decide between acting and music?

Noah Gray Cabey: You know what, I don't think I could make a decision. Acting is so much fun and all the people that I have met have been so nice. On the other hand, playing the piano is so awesome. I don't want to do either one of those things for the rest of my life but they are both such fun things. So for now I'd just hope that I would be able to do both.


It's been said that you want to be an astronaut, an archaeologist...even President of the United States?

Noah Gray Cabey: Well a lot of those things were said when I first started...when I was about three! But that's been whittled down a lot. I want to get into politics though. Now the three things that I am interested in are; being a lawyer, because my mom says I love to argue, being a doctor, because I think that would be so cool and interesting and I also want to get into politics because I have watched some of the debates and think they are really interesting.


You already have a foundation, called Action In Music. What's that about?

Noah Gray Cabey: Action In Music is an organisation that takes inner city children, who play instruments, to third world countries where they have concerts to raise money for different charities like Aids. So the money from these fundraising events goes to Aids orphanages. It shows the kids in the inner cities that no matter how badly they have it life can definitely be worse and they do something to help other people. My brother went to Africa when he was younger. He went to some of the orphanages and it really changed him. So the foundation is really important to me.


You have so many talents but what do you do for fun?

Noah Gray Cabey: One of the things I really like to do is play miniature golf with my dad. We also do off-roading some times. We live out in the desert in California so we can go off-roading with dirt bikes and we have a go-kart. So we go out there and we have a great time. I also play with my two dogs and my cat. My dad and I have just set up a semi-home theatre, we are still in the process of working on it and we watch movies on it and that's fun. We do a lot of fun stuff.


What are your favourite movies?

Noah Gray Cabey: I have got to say The Matrix Reloaded would be my favourite movie. I love The Matrix series it is awesome. I love anything that has martial arts, so The Matrix is pretty awesome. I also connected with the computer stuff.


Have you read many comic books?

Noah Gray Cabey: I have not done a lot of comic book reading but my brother has read some of The X Men comic books and he talks to me about that and we love The X Men.


How did you discover your musical talent?

Noah Gray Cabey: When I was about two going on three I had a little toy yellow piano, my dad would play a piece and I would memorise it and bang on my piano when I was supposed to. I wouldn't even play the right notes, I would just bang on it when I was supposed to in time with my dad. Then I decided that I really wanted to play the piano. So I asked dad to teach me a piece. He said I was too young but I kept on asking. So my dad taught me a first measure and I practised that and then he taught me the next measure and after a while I finally learnt the whole piece. And that is how I started playing the piano.


What is your favourite piece of music?

Noah Gray Cabey: Right now it is probably the Mendelssohn Variations. My dad plays that piece and it is really fast and rigorous and I like fast stuff. My mom plays the piano too and she likes slow chords while I like fast, crazy beats.


Do you play alongside your mom and dad?

Noah Gray Cabey: We don't have three pianos. I don't know any piano duets but I am trying to play one. When I was younger my whole family played some concerts and that was really fun. My oldest brother plays the violin and the viola, my 19 year-old brother plays the cello and my 17 year-old sister plays the violin. It is fun playing at concerts but there is a lot of work that goes into it. Everyone has got to work on it.

Noah Gray Cabey: I don't spend a whole lot of time listening to music but when I do I like The Commitments CD. I am starting to play a little blues jazz on the piano. It's a lot of fun because it is easier than classical music.


What school subjects do you most enjoy?

Noah Gray Cabey: Last year I liked History a lot. Maths was getting hard. When I was younger I liked Maths a lot. I am hoping that when I start school again I'll like Maths but for now I like History, especially American History.


Who are your heroes in your life?

Noah Gray Cabey: My real life heroes are guys like Nelson Mandela, not just for the political stuff but because he has forgiven so many people. As for my imaginary hero - Superman is pretty cool. My dad's favourite is Batman because he doesn't actually have any super powers. But if there were a fight between Batman and Superman then Superman would win.

Noah Gray Cabey: Teleportation and time travel because you could go into the future and also teleportation would be very handy.

Man, being a superhero is harder than you'd think and not nearly as fun as it should be. In the case of several of our new heroes, it's downright painful. Meet your new Heroes....

As a total eclipse casts its shadow across the globe, a genetics professor (Sendhil Ramamurthy, "Blind Guy Driving") in India is led by father's disappearance to uncover a secret theory -- there are people with super powers living among us.

A fugitive from justice (Leonard Roberts, "Buffy the Vampire Slayer") continues to baffle authorities who twice have been unable to contain him.

A gifted artist (Santiago Cabrera, "Empire"), whose drug addiction is destroying his life and relationship with his girlfriend (Tawny Cypress, NBC's "Third Watch"), can paint the future.

A down-on-his-luck Los Angeles beat cop (Greg Grunberg, "Alias") can hear people's thoughts, which puts him on the trail of an elusive serial killer.

In Japan, a young man (Masi Oka, NBC's "Scrubs") develops a way to stop time through sheer will power. Together our 'heroes' ultimate destiny is nothing less than saving the world.....

Man, being a superhero is harder than you'd think and not nearly as fun as it should be. In the case of several of our new heroes, it's downright painful.

As people around the world find their lives disrupted by their new, extraordinary abilities, authorities investigate several bizarre, gruesome murders.

Outside a bizarre, gruesome crime scene, Los Angeles beat cop, Matt Parkman, is the only one who can hear the cries of a missing little girl. Claire almost reveals her secret ability to the entire school. Thinking she's going crazy, Niki loses another block of time after waking to find some brutally murdered thugs in her garage. And while office drone, Hiro, investigates New York, Nathan confronts Peter following his plunge off a building.

It's all happening at 'Heroes'!