MORE OF YOUR FAVOURITE DISNEY CHANNEL STARS ARE COMING TO DVD
Take your favourite Disney Channel stars home and start your DVD collection when JONAS, SONNY WITH A CHANCE and WIZARDS OF WAVERLY PLACE Season 1 Volume 1 become available on Disney DVD for the first time! 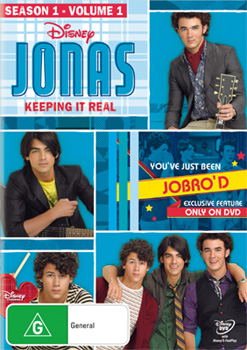 NICK, JOE and KEVIN JONAS are ready to rock your world when Season 1, Volume 1 of JONAS is released to Disney DVD!

Get ready to rock the house with JONAS! Kevin, Nick and Joe are three guys facing the same challenges as teenagers all around the world - the only difference is they are also internationally famous rock stars in the band JONAS!

Art imitates life with the rockin' JONAS trio, the hottest band on the planet. Follow their hilarious adventures as they navigate life in and out of the spotlight. They may be teen idols, but behind the cool clothes and sleek guitars, they're just three best friends from Jersey who still have to do the dishes and answer to Mum and Dad!

Get a sneak peek behind the scenes with bonus features ONLY available on Disney DVD. Watch as a fellow cast member falls victim to one of their famous pranks in You've just been Jo Bro'd: Surprising Chelsea Staub. Plus, start your collection of exclusive JONAS collectible cards with Volume 1 featuring Nick Jonas. JONAS: SEASON 1, VOLUME 1 is the rockin' fun addition to every Jo Bro fan's collection. 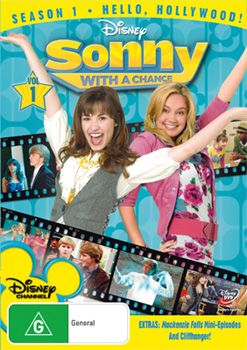 SONNY WITH A CHANCE: SEASON 1, VOLUME 1

DEMI LOVATO hits the spotlight in more ways than one as Sonny Munroe, a young girl plucked from small town USA and thrown into the bright lights of Hollywood. After becoming an overnight internet sensation, Sonny is invited to become a regular cast member of the hit teen sketch show So Random.Not everyone, however, is thrilled about sharing the spotlight - including Sonny's idol Tawni, and Chad Dylan Cooper, the handsome star of rival show Mackenzie Falls.

While playing hilarious characters and trying to make friends with other teen actors, Sonny lives her dream and faces every challenge with her unique sense of humour!

Get caught up in Sonny's excitement and enthusiasm from the beginning with the very first seven episodes of Sonny With A Chance!

Volume 1 is a must-have DVD, packed with loads of bonus features, including all 9 episodes of the rival TV show to So Random - Mackenzie Falls, including the never-before-seen cliffhanger episode that you can only see on DVD! SONNY WITH A CHANCE: SEASON 1, VOLUME 1 also comes with an exclusive collectible card. 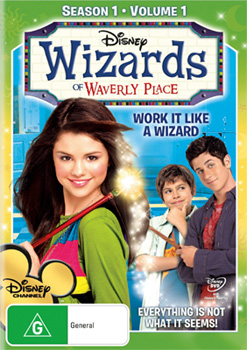 SELENA GOMEZ will no doubt cast her spell on you as a young wizard in training in WIZARDS OF WAVERLY PLACE! Living with her parents and brothers as a normal family in New York there is one small exception - they all have wizardry powers!

Meet Alex, Justin and Max Russo. They are just your average, ordinary kids living in New York City, except they have got a powerful secret: They are wizards in training! Alex and her brothers have lots to learn, like how to fly carpets, turn back time and master their magic wands. And when they try to charm their parents into letting them use more spells to make life easier, things really get tricky... and hilarious!

Watch as they try to balance their ordinary lives with their extraordinary powers with hilarious consequences. This Disney DVD first includes the exclusive bonus features; a magical trip behind the scenes with the cast.

WIZARDS OF WAVERLY PLACE: SEASON 1, VOLUME 1 is sure to leave you totally spellbound and begging for the next volume for your collection! With all your favourite spells, songs and sticky situations, these star-studded Disney Channel original series will keep the whole family entertained. Start your collection now!