Bold and unafraid to speak her mind, twenty year old Lucy Sugerman is back with her latest single "Paralysed", set to be her fourth single release from her debut EP 'hurt that's man made. 'The track leaves no part of teenage heartbreak untouched - wrapping up the often debilitating feeling of your first break-up in a cheeky indie-pop guitar-driven gem.

Writing about her coming of age experiences of modern love and life, Sugerman says the track is the saddest, yet the most upbeat song, on her debut EP 'hurt that's man made'. Written with Joel Quartermain (Eskimo Joe, Fergus James, G Flip, merci, mercy, Meg Mac), Lucy lets people into her world through relatable tales of her struggles and triumphs in romance and growing up, showing that they are not alone and cathartically capturing the spirit in learning from your own experiences.

"Time moves dreadfully slow when you're 17 and devastated over a boy." Lucy says, speaking on the track. "The poor guy didn't even do anything wrong. I'm just glad something cathartic you can dance and scream too was born out of a period in my teens of being so upset."

Inspired by her songwriting heroes from the 70s and with a knack for confessional storytelling tied with assured pop hooks, Sugerman's addictive and youthful energy perpetuates her music, even in her most vulnerable moments.

'I wrote the track on my first ever writing trip to Melbourne. I'd gotten broken up with for the first time that year and it was my first year out of school, so I went into all the sessions armed with things to write about. I couldn't stop singing about the breakup - it felt like I was stuck in time, and stuck in my hometown - all things that reminded me of this boy. All my friends were getting stuck into real adult life and I wasn't doing much and everything felt like it was terrible and wouldn't let up. 'paralysed' is the most literal and diaristic song on my EP, and arguably has the saddest lyrics, despite Joel and I picking a fast tempo, writing with major resolving pop chords and Joel layering up the fun guitar-based production. I guess now I can laugh about how sad I was, and I have a bunch of songs I'm proud of to remember that period of my life.' Lucy speaks.

2020 was a huge year for Lucy, releasing her debut single, "i wanna kiss boys cos i'm bored" (co-written and produced with Hauskey and MUKI), premiered and spotlighted on triple J Unearthed and added to Spotify's New Music Friday AU & NZ and Indie Pop playlists. Sugerman's debut was followed by her second single "Colourblind" released in 2021, co-written and produced with Dylan Nash (Dean Lewis, Eluera, Shannen James, The Million).

Lucy was the recipient of one of APRA AMCOS' Women in Music Mentorships as well as a part of their first ever Song Generations writing camp at ANU School of Music. Lucy was also selected to be a part of APRA AMCOS' SongHubs Melbourne 2021, the first ever all women and non-binary identifying songwriting sessions of its kind, alongside the likes of Alex Lahey, Eilish Gilligan, Ninajirachi, Odette, Tulliah, Woodes, and guest writers Montaigne, G Flip, KLP, Lisa Mitchell and Anna Laverty curated by Gretta Ray. Sugarman has also opened for SummerSalt Festival in Canberra, joining a lineup alongside Montaigne, Boy & Bear, John Butler, the Teskey Brothers and the Cat Empire.

Lucy Sugerman lets people into her world through relatable tales of her struggles and triumphs in romance and growing up with 'paralysed' She shows people that they are not alone, and captures the humour and spirit in learning from your own experiences.

Lucy Sugerman: I would say it's confessional, quietly vulnerable and youthful. I think it leans into the fact pop can be sonically diverse. I love telling stories and painting scenes.


Question: Can you tell us about Paralysed?

Lucy Sugerman: 'paralysed' has probably some of the saddest lyrics I've ever written, yet it's the most upbeat song I've ever released! I wrote it with Joel Quartermain (Eskimo Joe) after getting broken up with for the first time. Time moves dreadfully slow when you're 17 and devastated over a boy. The poor guy didn't even do anything wrong. I wrote the track on my first ever writing trip to Melbourne and was my first year out of school, so I went into all the sessions armed with things to write about. I couldn't stop singing about the breakup - it felt like I was stuck in time, and stuck in my hometown - all things that reminded me of this boy. All my friends were getting into real adult life and I wasn't doing much and everything felt like it was terrible and wouldn't let up. I'm just glad something cathartic you can dance and scream too was born out of a period of being so upset.

Lucy Sugerman: Growing up and even now, it was always lyrics and music that I turned to that reminded me I wasn't alone in my feelings and experiences. I just hope that the music I create can do the same for others, and that it feels relatable and are songs people can attach emotions and time periods to. I like to think I'm capturing the classic teen-young-adult angst time period, and all the fun stuff that comes with navigating heartbreak and figuring out who you are.

Lucy Sugerman: I'd say both are so much fun and have their pros & cons, but nothing beats connecting with a live audience and playing music with my friends.

Lucy Sugerman: At the moment as the country recovers and rebuilds from the recent COVID-19 lockdowns, I'm playing a few shows locally in my hometown of Canberra in celebration of the EP. The main one is the big EP launch at UC Hub on December 11th - full band shows, and two of my favourite Canberra bands Parklands & ZUKO. opening too. 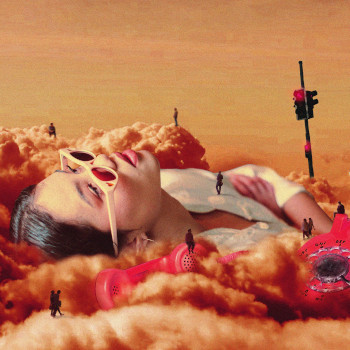 Lucy Sugerman: Definitely the fact that you never know what your brain might dream up when you're writing a song. Songwriting happens differently every time and it's like making something out of thin air. I also really enjoy the catharsis that comes with it when I'm writing about something personal.

Lucy Sugerman: At the moment I am loving PinkPatheress - she's an epic pop artist out of the UK who's around my age - and also really enjoying the new James Blake record and been revisiting my old love for Against All Logic.


Question: Tell us about APRA AMCOS' Women in Music Mentorships?

Lucy Sugerman: The mentorships are an excellent initiative set up by our Australian songwriting royalty and rights body APRA AMCOS to support young female-identifying, non-binary and gender non-conforming artists and musicians by providing funding assistance and real-life professional guidance. My mentorship with Mushroom's Julian McGruther came right as I was preparing to release my first single - it gave me the accountability I needed to structure my preparation and make connections within the wider industry, and Julian was a huge help in shaping the beginnings of my project. The program is all about facilitating the levelling up of careers and providing artists with guidance from key industry professionals and creatives and fostering the next generation of artists -which I think is incredibly important in sustaining the industry.

Lucy Sugerman: I think it's easy to think everyone in music knows what they're doing or are doing it better than you - but the thing about the music industry is that there's never a set path, and a lot of it comes down to luck and timing - what's most important is to carve out your own way of doing things!


Question: What has been your favourite part so far of becoming a music artist?

Lucy Sugerman: I think the fact that every day is one step closer to getting to create and enjoy music full time is pretty special. And definitely meeting new friends and making cool stuff.

Lucy Sugerman: The other great thing is that no day is ever the same! Sometimes it's an admin or finance day, other days it's a vocal recording day, or a songwriting session or music-video editing. Hopefully more gig days too - but everyday involves coffee and listening to an album.

Lucy Sugerman: At the moment I'm writing for my next release (another EP or maybe an album!) and refining the live set to get cracking on more live shows for 2022.