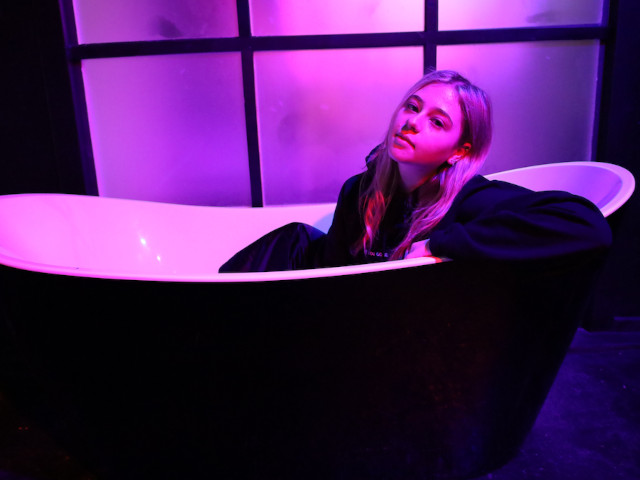 Pop punk singer-songwriter and actress, Maddie Glass is an unapologetic new artist on the rise. Born and raised in and around New York City, Maddie grew up acting and performing all around Manhattan in various Off Broadway productions where she found her love for the craft at a young age and never looked back. Attending NYU Tisch, Maddie Glass soon began songwriting; crafting witty, candid and relatable lyrics over a 2000's throwback sound.

Her debut single "Livin in 2021" is a poignant tale of the struggles Maddie Glass has faced in her young adult life. She confides, "Livin In 2021" is a very vulnerable song for me to release because I discuss my personal struggles with anxiety, body image, eating disorders, which many people deal with in some way". The song also details how unfortunate it is that women particularly often feel unsafe walking home late at night by themselves, which Maddie Glass has herself also experienced. Through unapologetic vocals, jagged pop-punk rhythms and gritty guitars, Maddie Glass successfully takes listeners on an enthralling musical rollercoaster.

On "Space Boyfriend" Maddie Glass discusses the perils of casual dating and her ultimate desires to find the one. The single features tongue and cheek lyrics and soaring melodies over Maddie Glass's signature pop rock soundscapes.

"I was looking for some humor in the swirling of emotions that come with heartbreak, I wanted to poke fun at the situation by writing a song with some "what-if" scenarios to even the score and lighten the mood. While I would never actually revenge kiss an ex's best friend, although the opportunity tends to arise, the idea is amusing. The lyrics are relatable and it's a really upbeat breakup song to listen to loud and sing out as you take your power back and realize they weren't worth the tears after all."

Her debut EP Thank you for Breaking my Heart is a standout collection of coming of age songs. Maddie Glass is the new kid on the block who is here to stay.