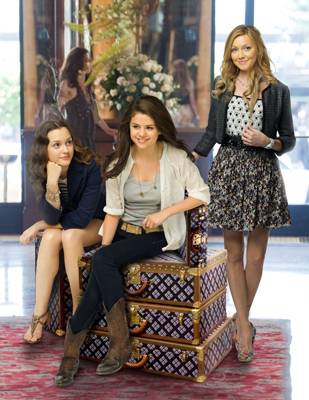 Synopsis: It's a typical summer day in the middle of Monte Carlo. Immaculately dressed women saunter in and out of Gucci and Hermes laden with glossy bags. The roads are packed with Ferraris and gleaming vintage cream sports cars competing for space. The golden heat of the sun is barely tempered by a sea breeze. And Selena Gomez, Leighton Meester and Cory Monteith are filming outside the most opulent building of all, the Hotel de Paris.

Selena plays Grace, a young woman who has dreamed about taking a trip to Paris for as long as she can remember. When she's saved up enough money to make her dreams come true, she persuades her best friend Emma (Katie Cassidy) and stepsister Meg (Leighton Meester) to come along for the ride. Sadly Paris is not all the girls hoped it would be, and they're deeply disappointed with their holiday. When they take a break from a dull guided tour and hide in the lobby of a five star hotel, Grace is mistaken for Cordelia, a spoiled British heiress. Grace does not have a chance to correct the mistake, and suddenly the girls find themselves in the South of France, having a much more glamorous time.

However, the holiday is not without its crazy moments, as the girls must avoid the real Cordelia (also played by Selena Gomez) as well as dealing with the suitors pursuing them across Europe, including Owen (Cory Monteith) who is determined to marry Emma.

Verdict: Monte Carlo showcases a young girl's ultimate dream - to be mistaken as a princess and be taken to the South of France on a glamorous ride with her two best friends!

After graduation Grace (Selena Gomez), her step-sister Meg (Leighton Meester) and best friend, Emma (Katie Cassidy) embark on a week-long trip to Paris. The Paris trip Grace has been dreaming of her entire life turns out to be less than perfect with horrible hotels and rapid tour buses until Grace is mistaken for troubled English heiress Cordelia Winthrop-Scott (also Selena Gomez) and the three girls are taken on the ride of a lifetime with private jets, 5 star hotels, couture gowns and sparkling diamonds.

Grace takes on the role of becoming the heiress without too many hiccups until Cordelia Winthrop-Scott's aunt sees through the scheme. The aunt continues to allow Grace to mimic Cordelia, until the end of the week, for the sake of a charity auction.

Monte Carlo is the perfect Cinderella story for the tween-aged demographic as the movie is equipped with lessons, romance, friendship, stunning scenery and of course a happy ending.
Rating: ****