One Direction have brought forward the radio and video premiere of their brand new single Live While We're Young to today, September 20th.

The hugely anticipated single will premiere on radio in the UK at 5pm and 2am AEST, with the video premiering on Vevo worldwide at 6pm (3am AEST).

An unauthorised, poor quality version of the video leaked online this morning prompting Syco/Sony to bring forward the premiere of the single by four days. The band did not feel that it was right or appropriate for the fans to hear the track as this illegal upload, so they have responded quickly, and sent out a message to fans this afternoon via a live Twitcam announcing plans.

One Direction say: "We wanted our fans to see the video and hear the single in the proper way so we've moved the premiere to tonight. We're really excited about Live While We're Young, we've worked really hard on it and we can't wait for everyone to see and hear it later today!"

Live While We're Young is the first single to be taken from One Direction's upcoming second album, TAKE ME HOME, released on November 9th in Australia. The single was available to pre-order earlier this month and immediately became the fastest selling pre-order single in history. The EP hit No.1 in over 50 countries within hours of it going on sale.

Live While We're Young will be released on 28th September in Australia.

Their debut album UP ALL NIGHT has to date reached No.1 in 17 countries - becoming the first UK band to debut at No.1 on the US Billboard chart with their first album. UP ALL NIGHT is certified triple platinum in Australia, their debut single, What Makes You Beautiful is 6x Platinum and One Thing is now triple platinum. UP ALL NIGHT: THE LIVE TOUR DVD is an incredible 7x platinum. They've sold out tours across the UK, USA, Australia and New Zealand, alongside New York's Madison Square Garden along the way. One Direction's live DVD has also been an amazing success, reaching No.1 in 27 different countries. One Direction have accumulated over 532 million YouTube views, over 37 million followers on Twitter and 9.5 million followers on Facebook.

In Spring 2013, One Direction will begin their sold out World Tour in the UK, which includes a massive nine shows at London's O2 Arena before heading to Australia for 20 sold out shows in September 2013.

WIN a copy of ONE DIRECTION: ALL FOR ONE on DVD 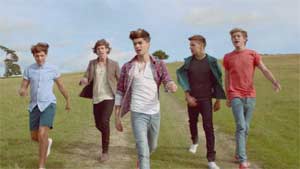