This album is certainly something for Reece to be proud of. "Recording this album was an amazing experience - I'll never forget the process of writing my first real album with my own original songs. I had the opportunity to work with so many talented and creative people. This one's the big one! I couldn't be prouder of these songs - I can't wait for the Lil Rockers to hear it. I think my sound has developed - it's so rock! It's fused in with everything. It's really me."

To celebrate the release of BEAUTIFUL NIGHTMARE, Reece will be making his way around Australia to see his Lil' Rockers where he will perform and be signing copies of his new album at the following locations:

Reece's win on The X Factor last November and the consequent single release of 'Good Night' resulted in him selling a single every 2.7 seconds the entire day of release and achieving Gold status within 24 hours. 'Good Night' currently stands at 4 x platinum sales, whilst his 2011 self-titled debut album is 2 x Platinum. His second single 'Shut Up & Kiss Me' was also a hit achieving Platinum sales, and his most recent single 'Shout It Out', also certified Platinum, debuted at #1 on the ARIA Charts, making Reece the first Australian this decade to score two chart-topping singles.

Stay tuned for more information regarding Reece's forth coming tour! 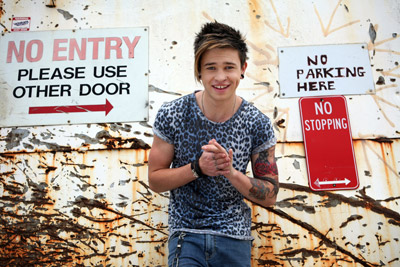 Question: What are you looking forward to most about sharing the stage with Justice Crew and The Janoskians?

Reece Mastin: It's going to be great, the boys are great sports and they'll get the kids pumped up before the band comes on! I can't wait to get out there with them as I know it's going to be a very, very big tour with a huge tour party and we'll see how much mischief we can get up to (laugh)!


Question: What songs will feature on this tour?

Reece Mastin: All my singles and then everything off my Beautiful Nightmare album as well; the fans will have to grab the album and learn some lyrics and come down and scream it, during the shows!


Question: Can you tell us about Beautiful Nightmare?

Reece Mastin: Beautiful Nightmare is awesome and the best thing about it is that I wrote it all and that's a big thing for me. There is a lot of variety on the album including sexy, cheeky and slow songs. I hope that everyone likes it!


Question: What's your inspiration when writing?

Reece Mastin: My inspiration comes from everything although for me I mostly write about girls (laughs) although it depends what I'm feeling that day and what my mood is like.

I wrote She Calls This Love, one of the closing tracks, when I was 13 and I have revamped and modernised it and it's turned out really well.

Reece Mastin: Energetic, sad at times but overall it's amazing and bouncy - I think everyone will want to dance to it.


Question: Which song holds the most memories, for you, on this album?

Reece Mastin: I'd say the song called Stars, I really love it and it's a slower song and I get a real kick out of that song. All of the songs hold memories but Stars would be the stand out.


Question: Why did you title the album Beautiful Nightmare?

Reece Mastin: Beautiful Nightmare catches your ear and makes you want to know what it is all about! There is a lot of dark music on the album in the sense of the music which has a weird vibe.

Reece Mastin: I listen to anything I can get my hands on; I listen to a lot of radio but I love old music too.

Reece Mastin: I love them both in different ways, I couldn't pick!

I love performing because of the energy you get - it's a high when you're on stage in front of crowds who are screaming your lyrics back to you! There is nothing like performing live!

I'm always writing as I'll never know when the next album, will be.


Question: What was it like working with Benji Madden?

Reece Mastin: It was awesome! Benji is a good bloke and we still stay in contact, which is good! Benji helped write the track Give Up The Girl. It was good to get in the studio and write with him and I'm always trying to find people to learn from when writing and Benji was a great person to learn off and he is the type of genre that I'd like to head in.

Reece Mastin: I'd love to work with any older icon such as Steve Tyler, Axel Rose or Slash!


Question: What was your first memory of music, during your childhood?

Reece Mastin: My first memory of music is when I first got my first guitar and I started playing after I moved to Australia and that's when I knew I wanted to be a musician.


Question: What advice would you give someone looking at auditing for the next X-Factor?


Question: What is a typical day like, for you?

Reece Mastin: Very full on! I do a lot of interviews, photo shoots and recording but I'm having the most fun I've had in my entire life which is good! However writing comes first and I enjoy being in the studio!


Question: Why is it so important to you to make contact with fans using social media?

Reece Mastin: It's vital that I communicate with my fans and social media gives me the opportunity to let everyone know what I'm doing, it's great to be able to stay in contact.

The fan attention is not a bad thing! My fans are vital and they're the main reason I'm doing this and I've written songs for fans before, although they haven't made this album - I hope to release them in the future. I'm always thinking about the fans when I'm writing, they're behind every track.


Question: What do you love most about your fans?

Reece Mastin: I love that my fans are everywhere and that they go crazy whenever I'm around!