Critically acclaimed multi-platinum recording artist, singer, songwriter and actress Pia Mia (@PiaMia 7.2 million Instagram followers) has just released her first holiday EP "CHRISTMAS", now available across all platforms. Recorded in a studio decked out in full Christmas décor and accompanied by a full orchestra and choir, the three new tracks feature the global pop star's signature sweet and soulful voice which has established her name in the music industry where she continuously releases timeless pop smashes for listeners around the world. The original tracks entitled "Home", "Unwrap Me", and "New Year" combine her stirring vocal talents with warm and upbeat melodies that are sure to become holiday classics for years to come.
"CHRISTMAS"
Apple | iTunes | Spotify | Amazon | Google Play
The new holiday EP, produced and arranged by Derrick "Bigg D" Baker and Canon Lamb, features new music from Pia Mia who has been on the hustle and grind as an independent artist. The new music comes fresh off the heels of her EP "My Side" which marked a change in musical tonality with smooth R&B-tinged hooks. She also recently released the fun and bombastic club anthems "Princess" (which included one of the first 'virtual' music videos shot during COVID) and "Hot" which featured Sean Paul and Flo Milli.
On the acting front, Pia Mia is set to co-star in the upcoming psychological thriller ISAAC opposite Dove Cameron (Apple's "Schmigadoon!") and RJ Mitte (AMC's "Breaking Bad") slated for a 2022 release. She had her first co-starring role in the fan-favorite feature film AFTER (currently available on Blue-Ray / DVD), which featured her 2019 hit single "Bitter Love" on AFTER's official soundtrack with over 6 MILLION streams to date.
Born and raised on the tropical island of Guam in the West Pacific, Pia Mia fell in love with music and performing at an early age. She joined school and community musicals and theater and began to post covers of her musical performances on YouTube. Almost instantaneously becoming a viral sensation, Pia moved to Los Angeles and signed with Grammy Award-winning producer, Babyface. In 2013, Pia Mia performed a cover of Drake's song "Hold on We're Going Home" for Drake, Kanye West, and the Kardashians. That same year, Ryan Seacrest debuted her independent single, "Red Love." At the age of 17, she formed Wolfpack Entertainment, a recording label, signing herself as its first artist, and then signed with Interscope Records. Billboard Magazine named Pia Mia one of eight "acts who will help define 2014." She released her debut EP, The Gift, which including the track "On My Mind", and collaborated with Chance the Rapper for the soundtrack to the original motion picture Divergent. 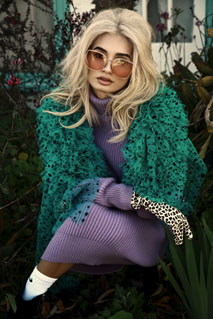 In January 2015, Pia Mia released "F**K WITH U," a buzz track for her fans which featured rapper G-Eazy. The track was a trending online smash with over 30 million streams. Pia's hit banger "Do It Again" featuring Chris Brown and Tyga went Platinum selling over 4 million copies worldwide and currently boasts over 1 BILLION streams (most recently having a resurgence on TikTok), saw chart-topping success on the US "Billboard Hot 100 List," and was selected for Clear Channel's "On The Verge" artist for Rhythm radio and now has over 379+ million YouTube views.
Pia has garnered international praise for her one-of-a-kind style, consistently topping high-profile best dressed lists, including Vogue. She has modeled for numerous independent such as Nasty Gal, Pink Dolphin, and Missguided, to name a few. If that wasn't enough, she was selected as the first-ever Fashion Director for Madonna's Material Girl clothing brand. Today, she has over 7.2 million Instagram followers (@PiaMia).