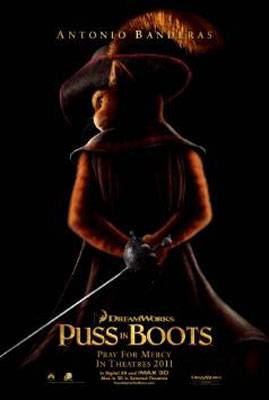 Synopsis: Swords will cross and hearts will be broken in this adventures starrin gone of the most beloved characters of the Shrek franchise - Puss In Boots. A swashbuckling ride through Puss's early years as he teams with mastermind Humpty Dumpty and the street-savvy Kitty to steal the famed goose that lays golden eggs.

Tinseltown's most touted Tabbies and Toms traipsed the red carpet-occasionally stopping to scratch or chase something sparkly before attending a special screening of the DreamWorks Animation release, "Puss in Boots." Headlining the event was the suave and sophisticated Spaniard himself, Antonio Banderas, who has supplied the voice of the legendary hero since Puss' first onscreen appearance in the global hit, "Shrek 2," in 2004.

The "felines only" unspooling on the lot of Paramount Pictures brought the crème de la crème of industry kitties before the kliegs, including such breed standards as Cat Blanchett, Don Cheetah, Leonardo di Catrio, Zach Galifurnakis, the Real Housecats of Beverly Hills, Kitty Perry, and Justin Timberlynx. "It was a purrfectly enjoyable event-I'm so glad I got up from my nap in time to make it," one attendee was overheard saying.

Long before he even met Shrek, the notorious fighter, lover and outlaw Puss in Boots becomes a hero when he sets off on an adventure with the tough and street smart Kitty Softpaws and the mastermind Humpty Dumpty to save his town. This is the true story of The Cat, The Myth, The Legend...The Boots.