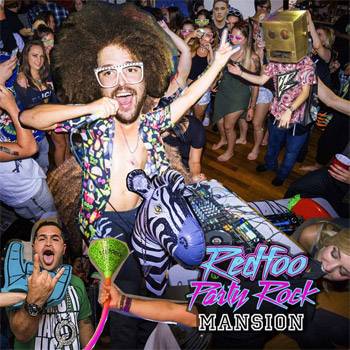 Grammy-nominated recording artist and King of Party Rock, Redfoo, has released his solo album debut Party Rock Mansion on March 18 on his own Party Rock Records, distributed worldwide by Warner Music Group's ADA.  Party Rock Mansion is available for pre-order starting today, and the party maestro is giving fans his international hit singles 'New Thang," 'Juicy Wiggle," 'Where the Sun Goes (ft. Stevie Wonder)" and 'Booty Man". The majority of the tracks were written and produced by Redfoo, who recorded them in his Party Rock Mansion studios in Hollywood.

Redfoo, the creative force behind electronic pop-rock duo LMFAO, delivers a debut album that will put your body to work with dance moves and party anthems.  Party Rock Mansion includes his wild 50s rock/EDM infusedJuicy Wiggle, which has racked up over 20 million YouTube views, and which Redfoo performs appearing as himself, in Alvin and the Chipmunks: The Road Chip(out tomorrow). In addition, Redfoo shows his sensitive side with 'Where the Sun Goes(ft. Stevie Wonder)" which Rolling Stone called 'a silky-smooth dance funk groover," and he rocks it with 'New Thang," the video for which has been viewed an astounding 174 million times. Party Rock Mansion also includes stone cold electronic dance tracks like 'Lights Out" and 'Meet Her At Tomorrow."

And the party doesn't stop there, here is the track listing:

10: Good Things Happen When Ya Drunk

12: Meet Her At Tomorrow

On Redfoo's Party Rock Mansion, he gets the chance to showcase his style in a more personal and meaningful way. He successfully explores a new range of emotion and sounds, perfectly balancing his sense of humor, sex appeal and sensitivity for a diverse listening experience - all rooted in Redfoo's classic 'feel good" mantra.  Orchestrating everything from production to delivery, the man behind the frames and fro can do it all.

Bursting onto the world stage as the creative half of the electronic pop-rock duo LMFAO, he scored a couple of No. 1 hits in more than 30 countries. His sound reflects a new movement in music, and catapulted him into superstar status, enabling him to collaborate with Kanye West, Pitbull, Carly Rae Jepson, Ice Cube, Will.i.am, Lil Jon, and fellow DJ's David Guetta and Steve Aoki. He even performed alongside Madonna in the 2012 Super Bowl half time show.