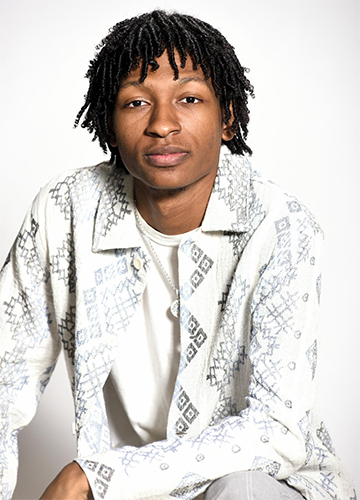 As charming as he is talented, award-winning actor Skylan Brooks (THE DARKEST MINDS, "The Get Down") is one of Hollywood's leading breakout stars as he captivates audiences once again with his next leading role in the upcoming 2022 sci-fi thriller film OUTSIDERS (formerly NO RUNNING) also starring Taryn Manning, Shane West, Rutina Wesley, Clark Backo, and Bill Engvall. Distributed by Vertical Entertainment, OUTSIDERS is a story about Jaylen Brown (Skylan Brooks), a Black high school student who finds himself under suspicion after his classmate disappears during a party, with prejudice quickly beginning to boil to the surface of his small southern town. While working against the clock to clear his own name, he begins to unravel a massive web of secrets that all point to otherworldly forces at play. The film is set to release in theaters and on VOD on Friday, March 11th, 2022.
Outsiders Trailer

Brooks is best known for his co-leading role alongside Amandla Stenberg in the 20th Century Fox film THE DARKEST MINDS, a sci-fi thriller about a group of teens (Amandla Stenberg, Skylan Brooks, Harris Dickinson, Miya Cech) who form a resistance group to fight back and reclaim control of their future when imprisoned by an adult world fearing everyone under the age of 18. Brooks also starred as the lead in the 2020 action thriller ARCHENEMY in which he starred alongside Joe Manganiello. He also starred as 'Ra-Ra Kiping' in Netflix's original series "The Get Down," created by Baz Lurhmann of Moulin Rouge! The Great Gatsby! and Romeo + Juliet and ARCHENEMY in which he starred alongside Joe Manganiello. Brooks got his first big break in acting in the Sundance 2013 film THE INEVITABLE DEFEAT OF MISTER AND PETE, a coming-of-age story about two inner city boys who are left to fend for themselves for the summer after their mothers are taken away by authorities. Brooks received rave reviews for this role and was nominated for the Young Artist Award "Best Performance in a Feature Film" for his role in this film as 'Mister', starring alongside Jennifer Hudson and Anthony Mackie. Brooks also starred in the film OUR FAMILY WEDDING alongside Forest Whitaker (The Last King of Scotland) and America Ferrera (Ugly Betty) and in the box office hit SOUTHPAW alongside Jake Gyllenhaal, Rachel McAdams, and Forest Whitaker. On the small scrfeen, Brooks appeared on USA's Network miniseries "Unsolved- Tupac, Biggie Smalls Murders" where he plays Snoop Dogg, and others such as "iCarly", "Children's Hospital", and "Funny or Die".
The young star studied theater at Los Angeles County School of The Arts grading and receiving his diploma from OFY. Skylan maintains several hobbies and skills in addition to his busy filming schedule. Skateboarding is a favorite pastime of his, not to mention he's a big gamer. Brooks is heavily spiritual, being inspired by the tenacity and will of humankind to live in general. Brooks is a lover of hip-hop and jazz music, as well as the arts. He also expresses his creativity through music, writing, dance and photography. He is currently recording new music in the studio. Fun Fact: He has an original song featured in OUTSIDERS.