The Wolfe Brothers have earned themselves a solid reputation for their catchy singles and dynamic live shows. They constantly push the envelope with their songwriting, and delight fans with their honest approach. Now, the band are gearing up for the release of their fifth studio album – their first international release through music juggernaut BBR / BMG – and it is a party from start to finish. Harking back to their origins, way back to the 80's, and 90's, the boys have embraced the vibe of the music they grew up with, and it is a pure delight for the listener.

Brothers Nick and Tom Wolfe have strong memories of playing the music they loved on cassette as youngsters. This passion is something they have carried throughout the new release. For lead singer Nick, while the album was three years in the recording process, he says it has essentially been their whole lives in the making, and that all started on cassette.

"Those sounds that first set us off on the journey and got us hooked on music came from tapes," he says. "We had boomboxes as kids that we'd make mixtapes on, we had cassette players in our first cars. There's some elements on this record from all our favourite sounds from the 80s right up to the now. Whether it be country, Aussie pub rock, which has always been a huge part of our musical-DNA, right up to new sounds and ideas that excite us at this moment. It's all there in some way, but it all started for us, on cassette."

Kids On Cassette features a swag of impressive collaborations, from LOCASH who appear on the latest single to Amy Sheppard and Jack Jones. For the brothers, it has been an honour that their musical peers were so keen to be part of the album. "It absolutely blows our minds the calibre of the talented folks who've joined forces with us on the record," says Nick. "From LOCASH on Startin' Something who just brought such an incredible energy to it, to Amy Sheppard who we have the utmost respect for and what Sheppard have achieved as an Aussie act on the global stage, and to collaborate with our musical hero Jack Jones on Downtime is just bucket list stuff. We're still pinching ourselves that it all happened, and they've leant their incredible talent to our music."

The Wolfe Brothers had a plan from the outset for the album – make a record jam-packed with songs that would work anywhere, anytime, and most importantly, on any live stage. As Nick refers to it, 'all killer, no filler'. "We wanted a bunch of songs that you could play live, play back-to-back as a concert set list in itself," he says. "Truly the best part is yet to come when we get to tour and play these songs live. More so that any other previous album, we've kept the live show as the major guiding factor in the arrangements and production choices that we made at every step."

The singles released from Kids On Cassette so far have already garnered the band acclaim. In May 2020, The Wolfe Brothers released the first single from album, No Brakes, a bold track which saw the duo moving full speed ahead into their forthcoming album. It hit #1 on the Country Charts, making it the band's 13th consecutive Country Number One. The follow-up single, Anybody Ever, an anthemic 80's style jam – released in October 2020 – saw the band achieve their 14th #1. In May this year, The Wolfe Brothers teamed up with mates LOCASH for a duet single Startin' Something, a joyful fusion of country, rock and pop and the single has already hit the Top 10, landing this week at #7 on the Country Airplay Charts.

Kids On Cassette was predominantly recorded at Nick's studio, Wolfe's Lair, and was produced by Nick Wolfe. The album also features the band's 'dream team' of producers with Matt Fell (Shane Nicholson, John Williamson, Travis Collins, Graeme Connors), Johnny Gaspsric (Gord Bamford, Renegade Station, George Canyon) and Linsday Rimes (Luke Bryan, Kane Brown, Kylie Minogue). Matt Fell also produced the band's last album Country Heart. All four of the band's studio albums have debuted at #2 on the ARIA charts and #1 on the Australian Country Music Album Charts. The band have been nominated for 16 Country Music Awards of Australia, and they took home three Golden Guitars in 2019 for Group Of The Year, Album of the Year and Song of the Year.

Interview with The Wolfe Brothers

The Wolfe Brothers: It's country, it's rock, it's real, it's heart, it's soul, it's us – songs and stories from our lives. We want it to make people feel happy, feel reflective and celebrate life.


Question: Can you tell us about Kids On Cassette?

The Wolfe Brothers: Kids On Cassette is our fifth studio album. It has been a mammoth effort to get this one out! A pandemic, isolation, lockdowns and more. It's been a windy road, but we are here. We are really proud of this record. We feel it's our best work yet.

The Wolfe Brothers: We love to make people feel good. Our live shows definitely reflect that. We also sing/write songs a lot about our life and where we are from. So, I think the listener would have a fair idea who we are and what we stand for. 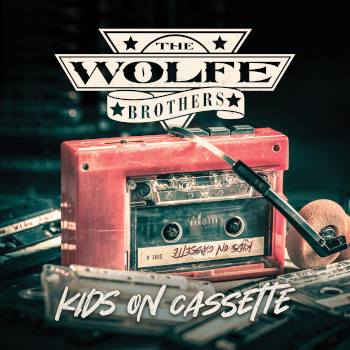 The Wolfe Brothers: We actually love both. At the moment we are hanging to play live. The COVID-19 pandemic has cancelled a lot of shows and festivals and we hope we see some break in all this soon.

The Wolfe Brothers: We are working on it! Things keep getting postponed. We have bunch of stuff happening later in the year and we can't wait. Details are at www.thewolfeborthers.com

The Wolfe Brothers: Our life, our farm, our childhood, our memories and our dreams. We like there to be a lot of hope in our music.

The Wolfe Brothers: Thirsty Merc! We just did a show with them and have gone back and listened to their back catalogue! What a GREAT band! Such incredible musicians.

The Wolfe Brothers: Our Dad, he was a big supporter of us following our dreams and pursing music. He was a drummer in a local cover band for 45 years! Unfortunately, he is no longer with us, but I wish he could of seen some of the success we have had.

The Wolfe Brothers: Well with our new album we kicked off a few big bucket lists! We have three new duets – one with our USA mates LOCASH, one with our great mate, Amy Sheppard from the incredible Sheppard, and a guy who has been an idol for us, Jack Jones. We absolutely LOVE what these wonderful talented people have brought to this record.

The Wolfe Brothers: It is the best feeling! We grew up listening to our favourite artists on the radio, so when we hear one of our tracks on the airwaves, it's a bit surreal.

The Wolfe Brothers: There has been a lot of highs and lows. But honestly, the last 18-months of this COVID-19 pandemic has been extremely challenging. With so many lockdowns and different restrictions state to state, it has been really tough to make any sort of normal touring work. People often don't think of bands as businesses, but essentially we are a small business that travel state to state playing live music and making our income. With so much uncertainty in the last 18 months, it has been tough.

The Wolfe Brothers: I think the travel and places we have got to go playing music has been pretty incredible. It has literally taken us around the world and that is an incredible thing.

The Wolfe Brothers: Well on the road it is something like: airport, hire car pick-up, motel, sound check, shower, dinner, pre-show fireball whiskey, showtime, pack it up, motel, sleep. Repeat.

The Wolfe Brothers: Touring! We want to get out and play this record as much as we can! Let's hope this vaccine roll out gets moving and we can do that!