Pop artist Anie Delgado has released a stunning new music video for her ethereal single, "Daydream." The track explores the strength in beauty and feminine energy and the trek of manifesting your desires instead of getting lost in one's dreams. "Daydream" is now available to view on Youtube.

Anie Delgado's new music video is a mesmerizing blend of robust sonic soundscapes that takes you on her dizzying journey. Delgado's unique pop sound is reminiscent of other female artists such as Ariana Grande, Billie Holiday, and Lana Del Ray with a dreamy and eclectic twist. "On 'Daydream,' I was thinking about my own daydreams and manifestations," explains Delgado. "Desire feels so intoxicating, I think it's important to let yourself live with that and respect the power of how it feels to want something badly -- that's what inspired the song sonically. Coming out of that dizzying state, confident and on steady ground, is what I find even more interesting - that was the inspiration lyrically. Feel your desires, but don't get lost in your daydreams." While you may get lost in the hypnotizing beat of the track, lyrically, Delgado talks about finding your way through your dreams and desires, to remain grounded and confident in your goals and ambitions. Directed by Brandon Buczek, Delgado's visual inspiration for the music video was the goddess Venus and her divine feminine energy. With striking and breathtaking visuals, the music video portrays the song's dreamy essence with the powerful goddess energy of Venus.

A native of Miami, Florida, Anie Delgado was immersed in a childhood full of her Cuban heritage full of a colorful Latin culture of food, music, and family. Delgado began her love for music at an early age, inspired by artists like Cher, Gloria Estefan, Julia Michaels, and Taylor Swift. After high school, she was accepted into The American Musical and Dramatic Academy, whose alumni include Jason Derulo, Anthony Ramos, and Paul Sorvino. Delgado's strong work ethic motivated her to extend her performance repertoire and included a stint in an experimental rock band as the lead singer where she played at The Bowery Electric, The Delancey, Gold Sounds Bar, and Leftfield NYC. After the rigorous program, she was cast in the Buddy: A Buddy Holly Story musical for a two-month residency at The Palace Theatre in the Dells. After finishing her residency, Delgado decided to leave the indie film/theater scene in NYC to focus on her writing goals and performing her own music. Soon after, she moved to Los Angeles where her talent was quickly recognized as she began working with top producers PJ Bianco (The Jonas Brothers, ARIZONA, Demi Lovato) and Nick Lee (Demi Lovato, Rachel Platten, Stray Kids). Due to her rising success, in 2019, Delgado joined Blakely Entertainment and commenced work on her debut EP with Sam Nicolosi of Warner Chapel/Seeking Blue, due out in early 2021.

With captivating imagery inspired by the goddess Venus, Anie Delgado's new music video for "Daydream" takes you on a dreamy exploration to find and manifest your inner confidence, power, and ambitions. Watch "Daydream" on Youtube and stream the single on digital music platforms worldwide. To keep up with Anie Delgado's journey, visit AnieDelgado.com.


Question: Can you tell us about Daydream?

Anie Delgado: It's a song I wrote with my friend Sam. We were actually writing a completely different song, but the music just led to this. Sam created these beautiful soundscapes that were really intoxicating. It made me think of desire " wanting something really badly. If I wrote this song a few years ago, it may have ended up unresolved, but my perspective in "Daydream" is feel your feelings to their fullest extent, but don't fall to them. Know that truly you're a "Daydream" and anyone would be lucky to have you.


Question: What inspired the video?

Anie Delgado: I think Venus is so powerful. I've always loved Greek mythology since I studied acting at conservatory. Greek tragedies were my favorite because although the stories are often about gods and goddesses and royalty, I find themes that are consistent with human nature.

When I think about "Daydream" and what it means to me, it means being like Venus. She doesn't have to lift a finger to exert her power. She is poise, calm, collected, graceful, and earth shattering. I think that most women possess that calm chaos and that inspired the music video. 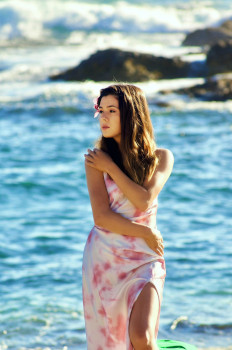 Anie Delgado: Yes! With any song I put out I just want to encourage them to feel their emotions. I feel like we have a tradition of not really doing that anymore. We're a bit desensitized, so I want my songs to encourage listeners to feel things and come out on the other side inspired and empowered.

Anie Delgado: I've gotten used to recording since I have been making pop music, but I started my performing journey as a live performer. I did musical theatre in high school and performed in New York City for a while. Performing live certainly feels like home and I can't wait until it's possible again.

Anie Delgado: Taylor Swift. She has been one of my biggest inspirations and I've discovered a million other amazing songwriters because she got me so obsessed with songwriting. I'd also love to tour with her… sigh there I go daydreaming again.

Anie Delgado: My fans! I am still new and growing my fan base, but after releasing my first few songs, I am constantly getting messages thanking me and telling me that my music is so positive and is inspiring them. I started writing music to process my own feelings, but the fact that it's touching others is just everything to me. I love sharing my experiences with them.

Anie Delgado: There are a few artists who are always on repeat in my house like Taylor Swift, Tame Impala, and Kacey Musgraves. Lately I have been listening to a lot of Abba, Polo and Pan, Dua Lipa, and the XX.

Anie Delgado: It's just something I had to do, but I didn't really know how the music industry worked when I was younger. I resolved to do something involving performing when I was about 17 and from there, I auditioned for musical theatre programs because it's all I knew back home. I was in that world for a little bit and then the universe just led me back to songwriting and making my own music. That's when I decided to move to LA and give it a real shot.


Question: Tell us about working with PJ Bianco?

Anie Delgado: PJ is great! He really reignited my ability to write. I had always written and been an artist driven by that, but for a while I got a little lost because I had producers trying to tell me who I was or needed to be. PJ was the first producer who said, go home, sit with your guitar, and write and that'll tell us who you are and help you find your voice.

The process of recording / creating the production was actually really quick. He had producer-songwriter Nick Lee in the studio assisting him. Pretty much I just played "Galaxy" for them on my guitar and then we got to work. It was done the next day.

Anie Delgado: Wow. Ever? I think a dance recital when I was two, but professionally it was in a production of Much Ado About Nothing Off-Broadway. My first performance under my artist project was at the Ivar in Hollywood. It was summer of 2019 to celebrate Galaxy's release and it was a lot of fun. I was able to fill out the crowd way more than expected having just moved to LA.

Anie Delgado: This is a great question because every day is so different. I am not with a label, so I wear many hats. My manager and I decided early into our relationship that we would try and build my career independently before going the label route. Some days, I am on set shooting a music video in the morning and answering interview questions in the evening. A lot of the times, I have sessions or edits to make on songs for part of the day and then other parts of the day are spent emailing with collaborators, my PR firm, my distribution company, etc. I wouldn't have it any other way right now though. I feel really lucky to own my music and to have complete control over my creative process.

Anie Delgado: Glam and eclectic. This year I actually made an effort to build my "big girl" wardrobe because so much of what I own is pink and faux fur and sequins and loud. My two wardrobe staples are boots (particularly white ones) and cool jackets.

Anie Delgado: More music. I am non-stop already this year. I have a song coming out every month until April so far and I don't plan on stopping there.