AVIV Drowning In The Culture 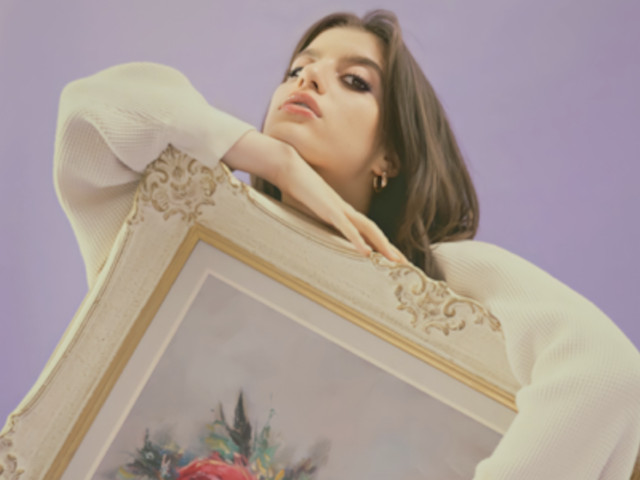 You know all of those warm and fuzzy first-time feelings you get as a teenager"the ones you wish you could hold on to forever?

AVIV retrofits those emotions into her songs. The 16-year-old Toronto singer, songwriter, and multi- instrumentalist pens the kind of affecting and arresting D.I.Y. pop that's both nostalgic and prescient (You could think of it like nineties alternative pop born post-social media). After generating millions of streams independently and receiving acclaim from Atwood Magazine and more, she continues to perfect this approach on a series of singles for Photo Finish Records.

"I'm just a teenager who acts much older, still gets excited about little things, and really loves to over- analyze her emotions and put them into music," she says. "I try to be true to myself with everything I do. The more AVIV the music is, the better."AVIV grew up in a big family of four siblings, including her twin brother. Every Saturday, they went record shopping together on Queen Street in Toronto, picking up classics by Fleetwood Mac, Radiohead, and more. "Most families went to the mall," she smiles. "We went to the record store together."

At six-years-old, she studied piano under "an old-fashioned teacher who scared me into practicing and getting good!" Around the same time, she developed her voice and eventually picked up guitar. Casual poetry transformed into songwriting as she regularly played her early compositions for friends and family. Throughout high school, she obsessed over the likes of Clairo, Lorde, and Lana Del Rey. "They're my three moms," she laughs.

Once the Pandemic hit, she found herself listening to more music than ever and, at the same time, writing as well. Working with her big brother's friend Jackson Follemer as co-producer, she regularly took the train to Montreal to visit them at McGill University and started to record music in 2020. Following "Cookie Dough," her independent single "Girls In Red" claimed coveted real estate on playlists such as "indie pop & chill" and eventually amassed hundreds of thousands of streams. "Frontlawn" and "Lonely Bitch" only increased her momentum with consistent organic growth.

"Music became a way to convey my emotions," she admits. "Since I won't even talk to my friends about a lot of these things, it's an outlet for me to talk about things I don't talk about."

With its glassy synths, simmering guitar, cinematic hum, and candid lyrics, "Black Coffee" represented another evolution. It initially came to life as a guitar and vocal demo by AVIV before producer Rian Lewis [Kiiara, D.R.A.M.] added his touch. The single initially debuted on Spotify's "New Music Friday" and attracted widespread critical acclaim. Atwood Magazine described it as "a song that acts as an album of memories, a reminder to enjoy the moment and to find a possible way to reconcile," and Fashionably Early predicted, "This is sure to be a hit." At the same time, it illuminated her keen melodic instincts and vivid storytelling strained through the hook, "And all of the memories and all of the warnings. Poured it all down in the drain. Yeah, we're like black coffee. But we could fill it up if we wanna."

Joined by OCTAVIO the Dweeb, she made her Photo Finish Records debut with the Official Remix.

On "love of your life", AVIV explored the naivety of certain young relationships and needing to receive artificial affirmation, which can only lead to toxicity and disappointment. With its breezy synths, emotive guitar riffs, and an attention-grabbing chorus, "love of your life" makes for an irresistible indie pop anthem of yearning.

Her single "Failed English" the songwriter explores "the somewhat nasty feelings which erupted following a breakup and demonization of the individual who broke up with you as a defense mechanism." With shiny synths, sweet melodies and funk-fueled bubbling beats, "Failed English" highlights the "incongruity of the narrative"detesting your ex while missing them". confides AVIV.

With "You Feel Like Depression" the artist goes deep into the many feelings of "self-guilt, self-blame and an overall feeling of failure. This feeling is amplified when the person with whom you've ended the relationship blames you for the breakup." She further confides. "You Feel Like Depression" enthralls with confessional vocals, grunge drenched guitars and attention grabbing melodies.

Her eight-track EP is titled Drowning In The Culture. She confesses, "It's been a long time in the making, I wrote it over the pandemic and I think a lot of the songs deal with different subjects and feelings that come through being a teenager in those times."

In the end, AVIV preserves feelings you don't ever want to lose with each and every song. "If my song takes you somewhere emotional, there's nothing better to me," she leaves off. "Or, if it makes you answer a question you've had about your life, that would be amazing. My songs make me answer my own questions. When I release them, I hope they do the same thing for you."