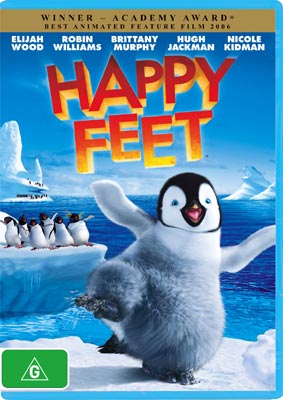 HAPPY FEET is set deep in Antarctica. Into the land of the Emperor Penguins where each needs a heart song to attract a soul mate. We follow the adventures of our hero Mumble (Wood), son of Memphis (Jackman) and Norma Jean (Kidman), who can't sing, however has a unique gift - he can tap dance. HAPPY FEET'S all-star voice cast includes: Elijah Wood, Brittany Murphy, Robin Williams, Hugh Jackman, Nicole Kidman, Hugo Weaving, Magda Szubanski, Anthony LaPaglia and the late Steve Irwin.

In the great nation of Emperor Penguins, deep in Antarctica, you're nobody unless you can sing-which is unfortunate for Mumble (ELIJAH WOOD), who is the worst singer in the world. He is born dancing to his own tune... tap dancing.

Though Mumble's mom, Norma Jean (NICOLE KIDMAN), thinks this little habit is cute, his dad, Memphis (HUGH JACKMAN), says "it just ain't penguin." Besides, they both know that without a Heartsong, Mumble may never find true love.

As fate would have it, his one friend, Gloria (BRITTANY MURPHY), happens to be the best singer around.

Mumble and Gloria have a connection from the moment they hatch, but she struggles with his strange "hippity-hoppity" ways.

Mumble is just too different-especially for Noah the Elder (HUGO WEAVING), the stern leader of Emperor Land, who ultimately casts him out of the community.

Away from home for the first time, Mumble meets a posse of decidedly un-Emperor-like penguins-the Adelie Amigos.

Led by Ramon (ROBIN WILLIAMS), the Adelies instantly embrace Mumble's cool dance moves and invite him to party with them.

In Adelie Land, Mumble seeks the counsel of Lovelace the Guru (also voiced by ROBIN WILLIAMS), a crazy-feathered Rockhopper penguin who will answer any of life's questions for the price of a pebble.

Together with Lovelace and the Amigos, Mumble sets out across vast landscapes and, after some epic encounters, proves that by being true to yourself, you can make all the difference in the world.

Review: Who can resist the toe-tapping music sensation that turns everyone into 'Happy Feet'. With a sensational cast, clever music mixing and an enlightening tale of a penguin who stood out among the rest and brought the world to it's feet.

Antarctica has some of the strongest winds on the planet: reaching speeds of 240km per hour.

Antarctica is the 5th largest continent on Earth - almost twice the size of Australia.

Antarctica is one of the coldest places on Earth with temperatures as low as 90C.

Adelie Penguins grow to be about 70 cm tall

Adelies have jet black heads and white rings around their eyes that give them a wide awake appearance. Adelies also have the best example of the classic 'tuxedo' style plumage.

Both male and female Adelie Penguins share the responsibility of incubating the eggs and caring for their chicks.

Adelies make nests using pebbles and often steal stones from each other to build them.

The primary predatory to Adelie penguins are Skua birds and Leopard seals.

Rockhopper penguins grow to be about 54cm tall.

Although Rockhoppers are smaller than Emperors and Adelies, they are aggressive and very mobile. The hop from rock to rock as their name suggests.

Rockhoppers have red eyes and a floppy crest of bright yellow and jet black feathers that give them the appearance of a mad scientist.

Emperor penguins are the largest bread of penguin and can stand up to 4ft tall.

When searching for food, Emperors can travel up to 1300km in a single trip.

Adult female Emperors lay only one egg every winter. The mother penguin leaves the egg for the father to care for and keep warm.

Emperor penguins can live to be 20 years old.

Using their webbed feet, Emperor penguins can push themselves and slide or 'toboggan' on the ice.

This can take up to 3 days.

Parents feed their chicks every 3 to 4 days - with regurgitated fish.

Emperor's are not considered fully grown until they loose the fluffy feathers and grow sleek, shiny waterproof feathers. It can take 6 to 12 months to do this and they become ready to fish in the sea.