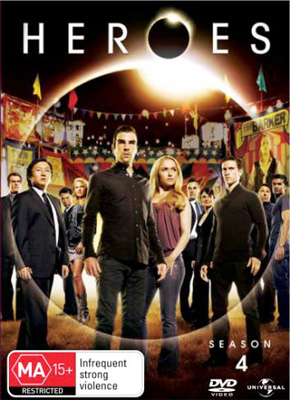 As the Heroes mourn fallen friends and face dangerous new foes, prepare for a wild ride, filled with shocking twists and turns, through an ominous funhouse that culminates in the final episode, a Brave New World.

Special Features:
Deconstructing Sylar: Discussion with Tim Kring, Adam Armus and Zachary Quinto.
Milo Speaks: Milo Vetimiglia talks about his career as an actor and his role on Heroes.
Heroes Resolution: Tim Kring and Heroes New Media Creatives discuss the importance of a web series for a hit television show and how new media entertainment is created.
Genetics of a Scene: An on-going series for Blu-ray and DVD fans. The cast and crew of Heroes provide an in-depth look at the production process of creating specific scenes.
Deleted and Extended Scenes
Screensaver: Sullivan Brothers Design Gallery screensaver for your television.
Audio Commentaries: Cast and crew commentaries on episodes including Once Upon a Time in Texas, Shadowboxing, The Fifth Stage and Brave New World. 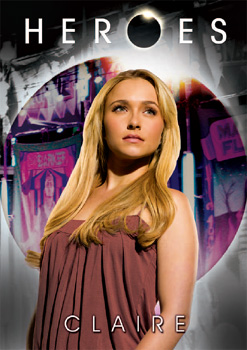 · Episode 1: "Genesis" - Claire discovers her power (spontaneous regeneration)
· Episode 3: "One Giant Leap" - Claire's classmate Brody attempts to rape her and accidently kills her in the process
· Episode 4: "Collision" - After recovering from her injuries, Claire takes Brody's car for a ride and intentionally drives it into a wall
· Episode 9: "Homecoming" - Claire's father forbids her from going to Homecoming. She sneaks out and is attacked by Sylar but is saved by Peter
· Episode 13: "The Fix" - Claire contacts her biological mother Meredith Gordon, who possesses pyrokinesis (the ability to create fire)
· Episode 17: "Company Man" - Claire and her family are taken hostage. She is given to her father on the condition that he return her to the Company that he works for if her powers manifest. Bennet (her father) explains this as the reason why he is so protective of Claire. Bennet orders the Haitian to escape with Claire
· Episode 18: "Parasite" - Claire and the Haitian go to the house of Nathan and Peter's mother, Angela who is also Claire's grandmother
· Episode 19: "0.7%" - Claire revives Peter who was killed by Sylar

· Episode 1: "Four months later..." 16-year-old Claire and her family have moved to Costa Verde, California, where Claire starts her first day of 11th grade in Costa Verde High School under the last name of "Butler". She quickly meets West, who nearly runs her over when she accidentally runs in front of his car. Following her father's advice - "Be entirely unextraordinary" - she does nothing that makes her stand out.

· Episode 2: "Lizards", Claire, curious about the extent of her abilities and whether they could be used to help others, cuts off her own toe to see if it grows back. It does, but West, watching through the window, catches her in the act. Claire tries to keep him quiet about it, so he reveals his power, the ability to fly, to her. When Claire notices a two-line scar on his neck, he explains that he was "abducted by aliens" just after meeting a man with "horn-rimmed glasses", revealing that he was one of many caught and released by Claire's father.

· Episode 7: "Out of Time", West comes to Claire's house unannounced to bring breakfast. Despite her efforts, West discovers the identity of Claire's father and refuses to talk to Claire about it. At the same time, her father discovers the news report about the drunk cheerleader - vague details of Claire and West's prank are given - and insists on moving again. Claire strongly refuses, saying that she will not go with them.

· Episode 9: "Cautionary Tales", Claire takes a stand against her father's paranoia regarding the Company, claiming that this was all about him. At school, Bob Bishop broaches the subject of underage drinking to her, but slips up and calls her "Miss Bennet," tipping her off to who he really is. Claire dashes home and discovers the painting that sent Noah into a paranoid frenzy (Noah's death) before she is abducted. After they take her blood, Bob, Mohinder, and Claire meet Noah, West, and Elle for a hostage exchange: Claire for Elle. As Claire and West fly away, Elle zaps them down. Noah shoots Elle, but is shot by Mohinder, devastating Claire, who breaks the news to Sandra and Lyle.

· Episode 10: "Truth & Consequences" a heartbroken and devastated Claire, who does not know that her father has been revived by the Company, scatters what Bob led the family to be his ashes at the beach. After doing so though, she quickly discovers Elle Bishop observing her. Claire runs up to Elle and tells her that due to what the Company did to her father, she will reveal her power. Claire then punches through Elle's car window and says, "You'll be the ones running" and walks away.

· Episode 11: "Powerless", Claire is confronted by both her mother and West about her decision to reveal her power to the world. She and West fight, she breaks up with him and after he flies off, her father appears, effectively halting her plans.

· Episode 1: "The Second Coming" - Sylar seeks out Claire for her healing abilities
· Episode 4: "I Am Become Death" - Future Claire seeks out Peter, who has obtained a dangerous ability, to save the world
· Episode 5: "Angels and Monsters" - Claire faces Stephen Canfield, an escaped villain that can create vortices.
· Episode 6: "Dying of the Light" - Claire and Sandra try to save Meredith from Doyle, one of the escaped villains
· Episode 9: "It's Coming" - Arthur sends Knox and Flint to capture Peter and Claire
· Episode 10: "The Eclipse: Part 1" - A second eclipse causes all of the heroes to lose their abilities. Arthur sends Elle and Sylar to capture Claire, who is under the care of her father and training to be able to fight off the villains. Claire is shot by Elle and can't heal without her powers.
· Episode 11: "The Eclipse: Part 2" - Noah attempts to get revenge on Sylar and Elle for shooting Claire whose condition is worsening
· Episode 14: "A Clear and Present Future" - Claire uncovers the plot by Nathan to hunt down and capture all people with abilities
· Episode 21: "Into Asylum" - Nathan and Claire go hiding in Mexico
· Episode 22: "Turn and Face the Strange" - Angela, Nathan, Peter and Claire come together to unearth secrets from the past

· Episode 1: "Orientation" - Claire starts as a freshman in college, but cannot fully leave her old life behind
· Episode 2: "Ink" - Claire tries to adjust to college life and the revelation of her ability
· Episode 3: "Hysterical Blindness" - Claire discovers that there is more to her new roommate than what she already knows
· Episode 4: "Strange Attractors" - Claire is concerned that someone wants to eliminate Gretchen during a treasure hunt for their sorority
· Episode 8: "Shadowboxing" - Claire learns that the sorority rush attack happened because of something her father did
· Episode 16: "The Art of Deception" - Claire tries to negotiate the surrender of Samuel to Noah
· Episode 17: "The Wall" - Samuel tries to convince Claire to join his family by revealing dark secrets from Noah's past to her
· Episode 18: "A Brave New World" - Noah seeks Claire's forgiveness as they work to escape from their underground prison. Claire shows the world the truth they may not be ready for by jumping off a ferris wheel with the press watching.